I'm an x boy scout and avid knotsman but for the love of me cannot get the halyard to stay in place, sure my knots hold up but why the slipping maybe electrical tape? what are you doing? clove hitch? timber hitch?

Clove hitch counter clockwise around the top boom works for me. Put a couple wraps of e-tape just above it to keep it from sliding up.
G

Double Clove hitch works for me. I did acquire a boat that had electrical tape on the upper spar where the halyard would be tied. I assumed it was a marker, but maybe it was for added friction. I’ve since removed the tape with no dire consequences.
Your results may vary.

Make a bowline knot to form a 24-inch circle. Look up the thread mentioned below, and "thrice-through-bowline".

The above becomes a hitch the first time you use it. It tightens itself when the sail is raised, but slides easily for adjustments when the sail is lowered. (Remove tape and cable ties formerly used to keep from sliding). There is no metal-to-metal contact.

I purchased a used boat, the gooseneck will not stay in the correct position - it slides down dropping the front of the spars onto the deck and rubbing the heck out of the deck - is the gooseneck too big or is there something I’m doing incorrectly? 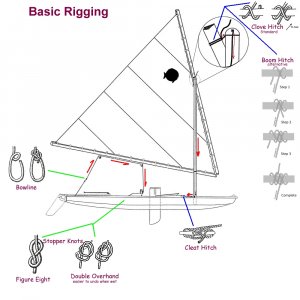 For my Minifish rig I always used a clove hitch, but I left enough tail on the bitter end to continue wrapping around the upper boom and tie back to the halyard above the boom, using a couple of half hitches just to hold the clove hitch tight. The clove hitch in itself would've undoubtedly worked just fine, never had one work loose, but the extra hitches offered security and gave me peace of mind when the wind was howling.

As a technical rock climber, I'd often back up knots with an additional knot for security: for instance, an overhand knot on top of the rewoven figure eight used to tie into my harness. Again, the rewoven figure eight never worked loose, but the additional knot offered peace of mind on tall crags or big walls. I always bought longer climbing ropes too, just to offset this extra rope used for security, and it also allowed me to tie a butterfly knot in the line to clip into an anchor, thereby freeing up an additional runner for extending placements. Just a little trick I learned from a climber far better than I ever was, though I was no slouch... but I've always been a better small craft sailor than technical rock climber, and part of that has to do with physique. I'm only around 6' tall, and thicker in the chest than some folks, while the best climbers are long, lean & lanky, 6'3" or 6'4" and taller, with those long limbs that allow them to stand tall on various footholds & reach for handholds which are often unavailable to me. But no worries, I was out there to have fun and enjoy the awesome wilderness venues, and I learned to climb within my limits... like ol' Clint said as Dirty Harry, "A GOOD MAN ALWAYS KNOWS HIS LIMITATIONS!"

P.S. This doesn't really apply to a Minifish or Sunfish, but a clove hitch works great aboard larger craft for securing fenders to stanchions... the hitch allows for quick & easy adjustment in placing the fender at just the right height for hull protection. For those sailors who've ever found themselves cursing while adjusting other knots used for this purpose, try a clove hitch, it'll make your life easier, LOL.

Hmm, I was gonna pull some home rehab today, but it's such a fine day that I may head out to the Stronghold instead... I noticed that the East Side campground is closed due to the idiotic viral scare campaign, but I might be able to park outside the gates, unload my pedal bike and cruise around for awhile. I'm gonna call the campground here in a moment, see if that's possible on the East Side without getting hassled. If not, there's always the West Side, wide open BLM land...

ALL WORK & NO PLAY MAKES JACK A DULL BOY... NOT ONLY DULL, BUT POSSIBLY DISGRUNTLED & READY TO GO POSTAL, LOL. 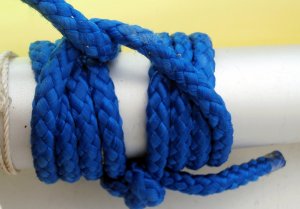 Staff member
Whatever works. We take 4 wraps around the spar then tie two half hitches. A little gaff tape wrapped around the spar won't hurt and it helps you remember where to tie your knot next time.

P.S. This doesn't really apply to a Minifish or Sunfish, but a clove hitch works great aboard larger craft for securing fenders to stanchions... the hitch allows for quick & easy adjustment in placing the fender at just the right height for hull protection. For those sailors who've ever found themselves cursing while adjusting other knots used for this purpose, try a clove hitch, it'll make your life easier, LOL.

Never tie a clove hitch on a trailer hitch ball!

Er... good advice, LOL. You been huffin' that paint again?

Staff member
I am a KISS guy. Just the clove hitch with a stopper at the bitter end.
Cable ties work really well to keep the hitch from sliding on the gaff; I used to use electrical tape prior to that, but that 'system' gets ugly after a while.
You must log in or register to reply here.
Share:
Twitter Reddit Email Link
Top