I bought a 2005 14.2 fixed keel for $250 from a private boat club on a private lake located in SoCal. It had been used as part of a rental fleet, and while it had plenty of dings in it, it seemed like a great deal. I had to modify a trailer I bought off craigslist: trailer and modification to accommodate the keel, approx. $800. So a good little boat for around $1000, although I've since spent another $1000 repairing and sorting things out, and I'll probably spent another $1000 on sails.
Still, a good boat, and I'm very happy.

First, I scrubbed off the heavy algae stains and calcium (appearing as a brown hull undercoat in the pic above) using diluted muriatic acid. Worked a charm.

Then, I was repairing blisters in the gel coat on the keel and noticed the keel had a crack running underneath its center, and when I ran a drill bit into the crack, something seemed really weird, so I had to carve out an inch-wide gap to see what was in there. 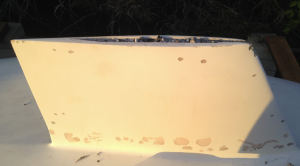 It seems Catalina must have picked up their lead ballast (200 lbs of it) from a gun range. I lifted out about an inch worth of bullets, then fiber-glassed in some reinforcing, then gel-coated over. I was happy with the result. 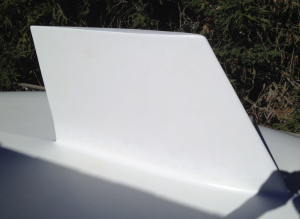 I repaired other chips and gouges in the boat, then polished the whole thing with wet and dry 800, then waxed and buffed with a West Marine wax/cleaner combo liquid. I removed the stripe decal as it was messed up--that was a real pita. 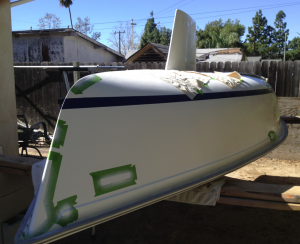 --just been hosed down: I couldn't get the wax that shiny

The boat had some hinky running rigging, with the main sheet cleating by the center block up on the boom--a cheap way to equip the boat for rental, I guess. So I'm putting in the Barney post from Catalina direct, and I may also re-rig the main.
I like the idea of doing away with the rear rope traveler completely, and instead using a fiddle block and cam cleat on the barney, and a fiddle block on the boom, about half way along. I figure I might get more mechanical advantage this way (4 wraps of the sheet instead of 3), but I wonder how the sail will feel with the rear traveler gone. Plenty of other boats have no rear traveler, so I'm interested to know if there is a specific reason the 14.2 has one, other than it was designed as a family friendly, inexpensive day sailor. Having the fiddles in the middle of the boom should create bend in the boom, thus flattening the sail when hauled in close. Which I like the idea of for heavy weather sailing--say 20-25 knots, solo.

Has anyone done that modification?

I noticed your just up the coast, lets sail together sometime. I live in Oxnard.

gregwcoats said:
I noticed your just up the coast, lets sail together sometime. I live in Oxnard.
Click to expand...

Sure. I'm waiting for a new set of sails from Ullman in Ventura--haven't had the boat on the water yet--but I will let you know as soon as I can sail her. Perhaps we can start a local club?

Great inspiration on your post here. About to start the process and hope mine turns out as good as this!

Cool! It's a fast little boat and well worth the effort.
M

I know this post is fairly old (6 years), but I have some questions, as I am restoring a 14.2 Keel version. My boat is a 1997 14.2k that does not have a barney post installed, also no holes are evident in the sole that one was ever installed. If a post were to be added, then how is the best way to install? It does not look to me like I have any access to the underside of the sole for installation of a backing plate. Would wood screws be enough to hold the post in? Do not want it getting ripped out underway. Another owner of a center board version told me his post was held in with woodscrews. If you put one in your keel boat, how did you do it, and did it hold-up OK to the stress? Just want to pick the best route, before I start drilling...
A

Interesting differences between fixed and swing keel models!
Pros' to the swing (which I have): Easy to trailer and launch. Low profile makes it easier to access cockpit when on the trailer, also lower profile makes for better storage scenarios in residential areas. Now I've heard that it points better than the fixed keel since the board's deeper. And it demands a good skipper with agility and a little gut (aids in hiking out). Once you've mastered the boat it's like a sports car. In 5 season's I've yet to dump her!
Cons: Obviously much more tender than the fixed keel version. Probably inferior in rough water.
I'm sure the fixed is almost knockdown proof, correct? I used to have a Catalina 22 and miss that stability.
Now I must say that if I planned on leaving my Capri permanently moored I would surely go for the fixed version.
Also the quality of your workmanship is incredible, are you a pro?
You must log in or register to reply here.
Share:
Twitter Reddit Email Link
Top