Here's the one Andy and I put on my boat. I really like this integrated block and cleat. Hope to sail soon Andy!

norcalsail said:
Here's the one Andy and I put on my boat. I really like this integrated block and cleat. Hope to sail soon Andy!
Click to expand...

I think Andy is going to have to answer this. I don't remember, LOL...

I started to call mine the 2138 because Lali kept referring to it that way. But yes, mine is in fact the 2627. Under low loads, the block free spools in both directions but when you load it up more, the ratchet kicks in. I believe Norcalsail also has the 2627 because I gave him one of mine to try.

The only other ratchet block I use is an old one on my Laser. It has a switch which allows for free spooling both directions which I use when the winds are really light. But the vast majority of the time I have the switch the other way with the ratchet on. So, if the 2138 has a switch so you can turn the ratchet on and off, then I don't see any big advantage having the 2627. It was always the function of the cam cleat being integrated with the block on my Sunfish that I was after.

Great job you guys picking up on the fine details!

norcalsail said:
Here's the one Andy and I put on my boat. I really like this integrated block and cleat. Hope to sail soon Andy!
Click to expand...

Hey, that was the day of your first Duncan's Mills bridge out and return! Oh, man... I want to do that again with you!! What a fun trip that was. 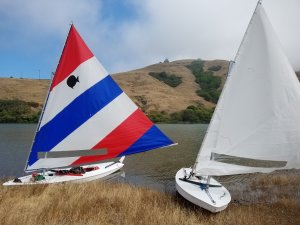 I ordered the Harken 2627 this morning. Glad I waited until I understood all the differences. The 2627 is the most expensive, but I like the "auto" feature and after reading the manuals, I saw that it is much easier to adjust cam cleat angle. It requires one screw to loosen and rotate. The 2138 requires removing 3 screws and replacing to adjust. The 2627 will be a lot easier to adjust while out sailing to get adjustment right. Thanks again for all the replies.

I have a Nautos ratchet block with cleat that I like.
Also, I mentioned in a post a while back about using a yoga block to protect the coaming from the spars when transporting. So here are photos of them both. 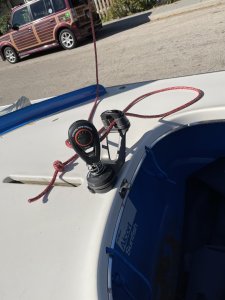 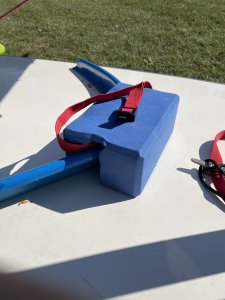 Looks like a nice arrangement. My block came in and I should be able to configure it to where it will work without having to change any mounts or drill.

It’s getting a bit cold to do much sailing and getting into the water, but I’ll post results when I can get it set up and working.
You must log in or register to reply here.
Share:
Twitter Reddit Email Link
Top