I thought that I would update the swivel block on my mid 90's Laser 2 since the cam cleat portion was missing.

The 4 screws turn but never back out of the holes (see picture below). The base still seems secure although I'm worried my fiddling has compromised that.

Has anyone else replaced one of these? Am I missing something? 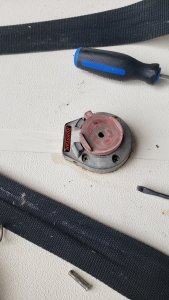 I have not replaced one of those specifically, but I would recommend that you try pulling on it to see if it will slide out since it seems as if you may have stripped the holes that the screws were in. Potentially, there could be bolts on the inside I have seen when there is a porthole nearby for access, but I am assuming that the holes are stripped. I would recommend that once you remove the screws, maybe using a magnetic screwdriver, you fill in the screwholes with fiberglass and resin, then sand down until flush with the deck. From there, I would slightly move the replacement block to where the screw holes do not use the previous ones which have been filled in, as these old ones will not be as strong. Start by drilling out holes in the deck, smaller than the screws, then install the new piece with marine sealant on the screws and turn hand tight to avoid stripping which often happens from a screwgun/drill.
R

Or just don't use it. I have a ratchet block on the L2 boom. Straight from the boom frees up the middle of the boat.
D

Thanks for the help. I got this working simply by leaving the base in position and putting a new cleat mechanism on.

After a bit of heavy weather sailing I understand why the racers ditch the cam cleat.

DLynch1 said:
After a bit of heavy weather sailing I understand why the racers ditch the cam cleat.
Click to expand...

Actually, L2 racers do, and need to, use mainsheet cleats in order to have enough hands available for spinnaker manoeuvres. For working the sheet in gusts, the cam arm should be at the right angle - the Ronstan that you have is adjustable with three positions (which one is correct I don’t remember anymore

). The other choice is to have cleats on the side decks next to the spinnaker cleats.

Still kind of curious of what keeps your fitting in place if the screws turn freely but don’t move in or out. Glue?

I'm thinking the Ronstan base may have been epoxied in place. I tried working a paint stripping tool underneath it but didn't get too far and maybe didn't try too hard either.
There are no inspection ports within a practical distance of the swivel and the boat is dry.
I'm thinking I'll just leave it be and go sailing instead.
You must log in or register to reply here.
Share:
Twitter Reddit Email Link
Top