New to the sunfish here. Was wondering if anyone has experiance cartopping sunfish on a Volvo XC 70 crosscountry? The boat is made in around 1975 to 1980 and I assume is very heavy. How much would an older boat weigh anyway??

Thanks in advance for your help
M

From everything I have read 130lbs if they have not absorbed alot of water over the years.
I have a 79 model and I swear it feel more like 230 when i'm trying to lift it by myself.
I also read a trick is to put the nose up on a ladder step about the same height as the roof rack then lift and swing the stern up on the racks...sounds dangerous but it must work if people are doing it.

my suggestion..........
Save your back and buy a used trailer you wont even notice it behind your Volvo.
F

We've had this discussion before and the prevailing suggestion is: BUY A TRAILER!

Thanks Fred but the boat is to be moved once from New York state to a lake in Quebec Canada where it will be staying for the remainder of its life. I will not be moving it again and therfore am only looking for a one way ride..hence the car topping.

If you have any other trailer really that would work too. We bought a trailer just to move stuff around and one time we just put two 2x4's across it and strapped the boat upside down on it. That worked really well. If you have another person to help you get the boat up on top of the car then I would think that would work.

Have done the car top method on my Durango, use two people to get it up on top (safer than the ladder method) deck down on the roof racks. An older SF at 130-140 is very good, some can be quite a bit more. Watch your vehicles max roof load and try to stay within that range, a heavy SF on top will affect your center of gravity and may make your vehicle unstable. Pad your roof racks well, I suggest 4-5 straps to secure, 2 (or 3) across side to side, 1 from the stern to bumper and 1 or 2 from the bow handle to the bumper. Try to have it a little lower in the front to reduce lift and use strong ratchet type straps ( I like 1200-1500 or more 1"+ wide ones). It may sound like over kill, but better than losing the SF and possibly having it hit another vehicle. You can get a four pak of some heavy duty ratchet straps at Wal-Mart for about $20-25. Check them often, every 25 miles or so, longer after the first few checks, when new they will stretch. I do not recommend rope of any kind.
K

If this is one-time move then I would just car-top the boat. Assuming it weighs in the 130-140 lb. range, your Volvo roof should be able to support the weight.

You will need some sort of cartop carrier to support the boat. Some people wrap "swim noodles" (available at Wal-mart for less than $5) around the carttop carrier to protect the boat. Others have used cushions or life jackets. Whatever you do, make sure the boat is tied down front and back as well as across the cartop carriers.

I would enlist the help of a neighbor or friend to help lift the boat on top of the car. The ladder technique is dangerous and you can easily damage the boat or car (as well as injure yourself).

If you must do it yourself you can try this. It is a variation of the ladder technique. If your cartop carrier bars are round and hollow, you can insert a piece of pipe inside the front carrier bar and leave about 3 to 4 feet sticking out of the carrier. You will need a piece of pipe about 7 to 8 feet long. Place the boat along side and parallel to the car about 3 to 4 feet from the car. Lift the bow up (it will be heavy) so it is supported by the pipe. Important !! - Make sure the stern end is anchored some way so it doesn't start to slide when you lift the bow. Now lift the stern and put it on the rear cartop carrier. Be careful, the boat will tend to slide backward when you lift the stern. Then slide the bow over onto the front carrier. Finally, remove the pipe and tie it to your carriers. Reverse the process when you unload the boat.

Obviously, the pipe must be strong enough to support the weight of the boat and the front cartop carrier must be firmly attached to the car.

I have done this many times and it works fine as long as you are careful.

Re: Cartopping a Sunfish (more)

Here is another "ladder" method to load a Sunfish on your car by yourself.

It is a good idea to have a helper as the boat will have a tendency to skew to one side of the ladder and and can easily topple off the ladder. I have also used this method several times, but you do have to be very careful.

When all is said and done, a trailer is the best way to transport a Sunfish.

Another option would be to rent a moving truck from either Ryder or UHaul and put the fish in it. That's how I transported two boats, you just have to measure and call around for the best deal. I'm not sure how many miles you need to go so it might cost too much. The truck that I rented had 2X4's attached to the sides which we could tie the boats to so they would not move too much. We had them on their dolly and they made the ~200 mile trip just fine.

I rooftop my SF on a '98 Camery and I have no problem. follow the advice of at least four straps: two across and one of both off the bow and stern down to the front and back bumpers respectively and you'll have no problems. I just took my SF from Orange county, CA to lake tahoe (9.5 hours on the freeway) and checked the tie downs several times (reststops and fill-ups). Definitely use ratcheting type tie-downs to ensure a tight fit. Yakima rack systems make something called "hully rollers" ($70/pair; I use 2 pair; 1 pair back and 1 pair front rack bar) that I use to load the boat by myself. Put the bow on the back end, walk back to the stern and lift, pushing forward, it rolls right up there (when using the rollers, SF mounts on roof like it sits in the water). Good Luck!

Outstanding tips - I'm moving from New Jersey to Colorado and insist on bringing my fish ( I'm being optomistic and want to start a fleet in SW Colorado - stay tuned) and the cartopping tips are very helpful for my 2000 mile trip.

FishHead, could you post a photo of your setup? I'm looking to put a Sunfish on top of my 2003 Camry, so not too different at all.

I cartopped my 77 for years with no problem. I got a trailer when I ran out of people to help me lift it and I got tired of doing it. If your car has racks you're in good shape. Just put some pool noodles on the racks to protect both the hull and the racks from scratching each other.
P

you weenies!! LOL I used to load a Laser atop a Chevy Blazer 20 years ago.. by myself. no kidding, using a technique similiar to the extension ladder method sans ladder...

I loaded my hull onto a Forester when I acquired the hull and then removed quite a bit of paint from the Subaru when I unloaded it by myself.

It took some time, but I was able to find a trailer for $60 on craigslist. After replacing the tires and bearings and building a cradle, the trailer works like a charm. I won't go the cartop route again.
P

there are older and thus less expensive trailers out there on craigslist and such but you have to be willing to put some work and perhpas some expense in it. It lkikely has to be fitted to your sunfish (as any trailer would) and tires/bearings/skids/rollers/fundamental structure all be to be up to snuff...
D

I think I found a solution. I'm going to start with a Yakima Q Tower setup, about $100 used, and go from there. But how to push the hull up the back of the car? I present to you the following: 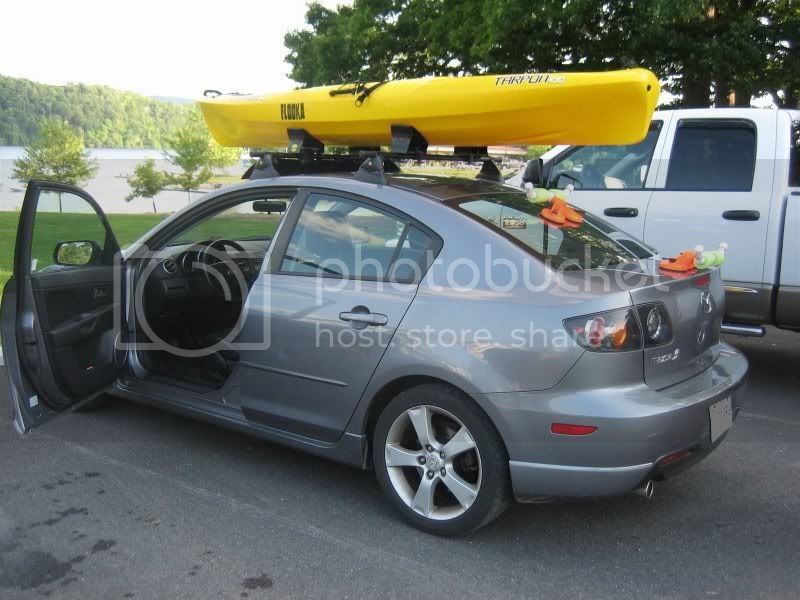 Instead of using a ladder, I'd opt for something like this: 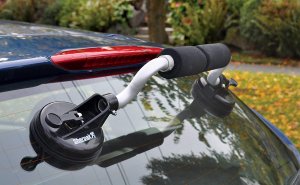 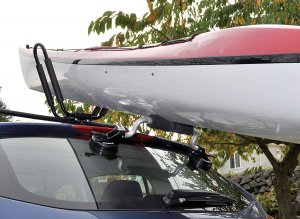 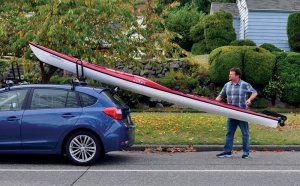 Then, to protect the boat on the roof, there's this: 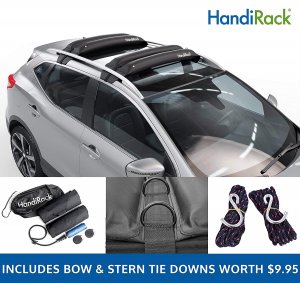 For those with trucks, using the Sunfish gudgeon (and a ⅜" bolt) seemed like a natural way to "truck-top" the Sunfish.

The photo below is my first effort with my first Sunfish. I've since started using a skinny 1/16" stainless steel cable to hold the gudgeon in the right direction. Since having a wide rope or strap in my vision was distracting, this cable is practically invisible. It's taken the gusts just fine and was proven over about 4000 miles of "truck-topping" three different Sunfish.

Guided over the paint by pieces of PVC and foam noodle, "steering" this end of the Sunfish is a piece of cake. Here, the 2-foot bridle is made of heavy chain under the bumper, but it is now made of a very short length of light chain, and connects the truck's two built-in towing eyes. 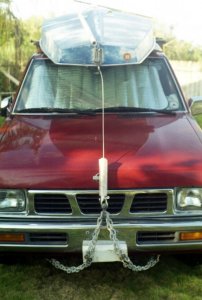 On another long trip (with a different Sunfish) the bow handle was secured to a second line run around the middle of the tailgate. 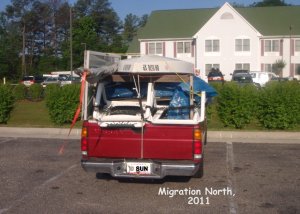 The wood rack has since been changed to a metal one. With the old rack, I punctured two tennis balls and secured them with cable-ties to the cross members. They helped to stabilize the Sunfish, which was important on 2-lane highways. There, wind-blasts from passing 18-wheelers tended to "steer" the Sunfish. I don't think there's a cure for that. 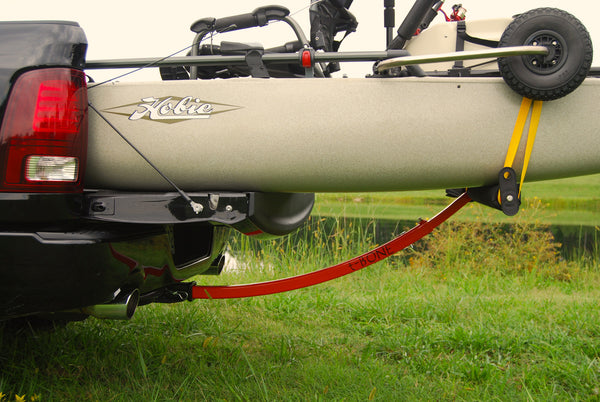 Here's what I used to do before I bought my trailer. Also made a dolly as per Tag's plans to get the boat to the water. Thanks Tag...