I have some rotten wood in the keel sump. I am going to replace the stringers that were installed when the verm job was done a long time ago. I have owned the boat 2 years. The one behind the keel is delaminated from the floor too. Questions: What wood material should I use? I feel like I should keep the boat in the water to remove stringer and glass it in, I think the trailer may push up on the keel too much and change the shape, any thoughts? I plan to be super safe with any waste. 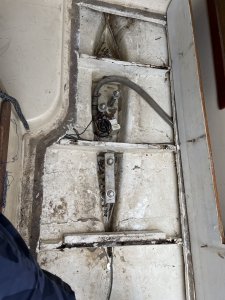 I wouldn't replace the wood, I would use ART Flex epoxy: Advanced Repair Technology, Inc. - Flexible Wood Repair System
Lots of videos on this stuff replacing wood rot, holding up for structural support, and will probably last as long as the boat. Might save you some time as well if you are not handy with the wood products

It's been a month. We don't know how you're making out. But no, I don't suggest any of that stuff. The athwartship stiffeners, historically called 'keel floors', are designed to spread the forces (load) from the keel out into the hull. The keel sump, the molded part of the hull to which the keel is attached, would see very high stress at the junction with the boat hull when the boat is heeled and pounding through waves. Unless they were made of thick white oak, wood won't do. They should be made of a thick fiberglass laminate. I think 1/4-3/8 thick. Back in 1996, when I removed vermiculite and filled my keel sump, they were supplied by Tillotson Pearson, the boat builder, as a retrofit part. They were pretty crappy, but did the job. They're roughly T-shaped and extend down in the sump and then out to the edges of the cabin sole. Your sump is only partially filled. I would imagine that you could install proper stiffeners in the sump you have without removing the filler. Filling it all the way up would then anchor them in place and make the thing one solid mass with the keel floors projecting out along the hull. If you were to do that you should clean the sump and abrade it as best as possible so things bond properly.

Following is a photo of what mine looks like. The forward two are the ones supplied by TPI. One of them has piece of wood on top to get the level right to support the floor. The aft-most one I fabricated. In the photo, it's not yet 'tabbed in' to the hull, but was ultimately, with 4 layers of glass cloth (10 or 12 oz), and epoxy. It just stiffens the hull at a point immediately aft of the keel sump. I was fixated on eliminating a hollow area seen on the hull just aft of the keel. I think most J/24s have that... maybe except the newest ones. It devolved into many hours of bottom fairing. Probably I should have spent my time practicing spinnaker gybes instead. 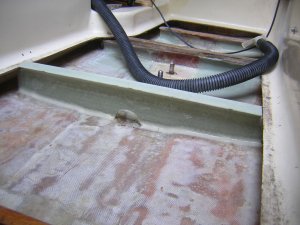 If your intention is to race the boat and you're concerned about being class legal, maybe you should speak to your district measurer. I've seen talk over on the Sailing Anarchy forum about some newer requirements for filling the sump. It sounds overly complicated and expensive to me. I can't imagine a measurer rejecting your boat if you were to do it like I did, but of course I don't know. That was the normal way back then.
You must log in or register to reply here.
Share:
Twitter Reddit Email Link
Top