Would you sail your Sunfish (or small sailboat) in this lake?

It's really, really close to home for me. Unfortunately, the average depth is about 6 foot in the middle of the lake. There is a concrete, man-made waterfall on the northeast corner of the lake (the deepest section) that concerns me. But the lake is clean, I never really see much vegetation like I do other local lakes. There's sand around the edges.

I do not own these photos. Pictures are from GPS Nautical Charts and Rutgers. 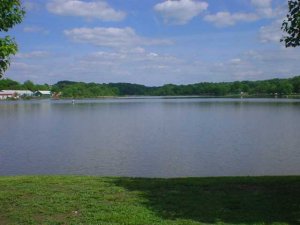 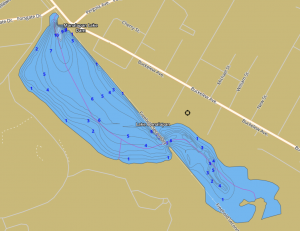 if the shallow depth is a concern, you could always sail with the daggerboard raised partly up.
but yea, I agree with Lali that it should be sailable! it doesn't look super wide, but that just means you might end up tacking more often, which is good for practice.

Hi Sammy Sails., I looked at this lake on a map, and I think you're going to find it a bit tight. The northern part of the lake looks to only be about .4 miles long and less than .2 miles wide. It looks like there is a railroad bridge separating the northern section from the southern section, and I am thinking there won't be clearance to sail into the southern end.

Still, if it's the only lake around, I am sure it will make do.

If it is REALLY close to your home, I'd still go say go for it.

Have you read "Second Wind" - a biography about the author getting back into Sunfish sailing/racing?. The author sailed on multiple tiny ponds on Nantucket Island - I'm sure some were simliar size or even smaller.

I think it is big enough. However it is shallow around the edges so you may run aground. If you find you need something bigger, Round Valley in NJ might be a good choice. Are NJ parks open at the moment?

This is called "puddle sailing". It is great fun and will make you a better sailor fast owing to the shallows, shifty winds and the ever present danger of being swept over the spillway and killed. Go for it, but use an old, beat up daggerboard until you learn where the thin spots are.

I learned how to sail on Acton Lake near Oxford, Ohio 1n the early 1960s. It was almost exactly one square mile, but had several active sailing classes racing every Sunday from May to September. There were several National champions from this puddle in boats like the Y-Flyer, Rebel and Rhodes Bantam (me!)

Why not? I have a Hobie Cat that I trailer 70 miles to sail on a 10,000 acre lake. My local lake is 160 acres, which is tiny for a Hobie. But sometimes I sail the Hobie on it, I just have to tack A LOT. I was given a Sunfish last fall, and it's a BLAST on the small lake.

Staff member
Why don't you try and see if you like it. And, as Alan already pointed out, don't use a fancy/new board.

You never have to worry about turtling! If you flip over.....just stand up!

I wasn't expecting this much positive feedback, thank you all very much! I am happy to hear it all and looking forward to puddle sailing.

beldar boathead said:
I think it is big enough. However it is shallow around the edges so you may run aground. If you find you need something bigger, Round Valley in NJ might be a good choice. Are NJ parks open at the moment?
Click to expand...

No NJ parks are still closed. WMAs are open, so I could drop my boat in Prospertown Lake or Assunpink, but they're a bit farther so I'm hoping parks open soon (well, soon when it's healthy enough). All we can do is dream and plan

There is a man made lake in the Adirondack Mountains that is 3 feet deep in spots and is great to sail. You can be hiking in good wind and sail by a person waist deep next to their party barge. Alan is right start with a older board. I sail with a older foil board that is longer that the wood ones and haven't hit yet.

Put a cannon aboard your boat and you'll be master of the lake, LOL... wait, a cannon might be overkill, a lever-action .44 will do just fine.

Looks great. I learnt to sail on a lake about a quarter the size of this one.

Check out Riggs Lake, an 11-acre reservoir at 9000' in the Pinaleno Mountains... average depth 45', according to one Internet source. Must be deep in the middle, since the water along shore looks pretty shallow. I suppose there's some scientific method to work out that average, maybe using sonar, but for me, it'd be more simple: I can stand vs. I gotta swim!!! 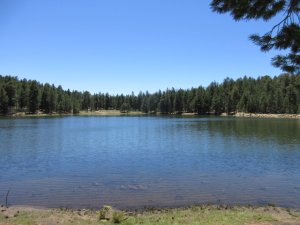 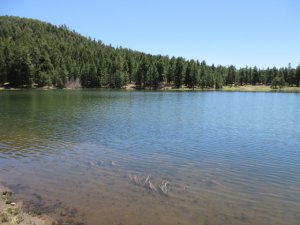 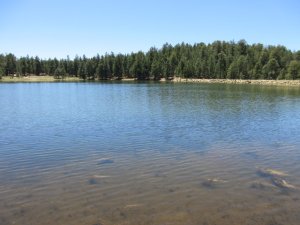 Maybe that web source f#%ed up and the average depth is really 4.5', LOL. Nice little lake, but the shores were a bit crowded for my tastes... can't tell from these pics, but there must have been 60 vehicles and 150 people distributed around this lake, due to the mini heat wave below in the high desert. Saw some kayaks and a canoe (still atop vehicles), and at least a dozen folks fishing from shore... scattered about, hard to see in these pics.

Gonna post more pics of this 'lake in the sky' in my usual thread, it'd be a great place to camp during the week, when there wouldn't be as many people... but I wanted to pull my recon today, didn't know this range was so popular, and of course desert temps in the 90s below sent many folks up here to cool off. Temp here was 70 when I parked and strolled around, very nice... especially in the shade of those pines with a slight breeze coming across the water.

P.S. There were folks fishing to either side of me when I snapped these pics, 50' or 60' away, but I didn't want to rudely photograph them, LOL... nice elderly folks, including two older women in folding chairs, lines cast from under the shade of a pine tree on shore. Older dude on my left, messing with his lines... they were enjoying themselves, so I just waved and took my pics in different directions. No worries, a good time was had by all, LOL.

I’d Rather Be Sailing My Tornado

Wear water shoes. Tiny places have swirley winds. Should be fun. If it gets too small for you just find another puddle. As long as there are no obstructions such as trees, concrete, OK.

We lived in Ohio for many years. After growing up in Michigan it was a let down and eye opener to see how few, Brown and small the Ohio options were. There are a couple impoundments west of Columbus and in Delaware but they are poor venues on a low wind day. Too many speed boats. Most of the small lakes have power limits. We sailed off the Lake Erie beaches a lot. I also sailed Lake Vesuvius near Ironton, very small and mountain sheltered.

The lake you note is on par with one we sailed living in Grand Rapids, Reeds Lake. Reeds is deeper but tiny and surrounded by hills, trees, tall buildings, making for challenging conditions. Reeds Lake | East Grand Rapids, MI - Official Website It has the pretentiously named Grand Rapids Yacht Club. They race Melgus C, MC, E Scows, Optimus and a few others. Most affordable YC ever. I sailed the Sunfish there often and famously a front page above the fold photo in the local paper for sailing the Tornado on Christmas Eve day.

I would ask locals if there are stumps or objects that you can get the dagger board caught on otherwise, why not?
L

tag said:
if the shallow depth is a concern, you could always sail with the daggerboard raised partly up.
but yea, I agree with Lali that it should be sailable! it doesn't look super wide, but that just means you might end up tacking more often, which is good for practice.

But you could also take a page from the Dutch, who've driven leeboard science to the max.

Use the existing daggerboard trunk as the anchoring point, and substitute two daggerboards--one on each side. Like a centerboard, and freed from the Sunfish's rigid daggerboard trunk, they won't be damaged from a grounding.

Groundings with a factory daggerboard will eventually result in daggerboard trunk leaks--which are the most difficult of Sunfish leaks to assess and fix.