Why did you choose sailing over a Powerboat?

i am curious as to why everyone chose owning a sailboat over a powerboat. they both have there ups and downs but what were your main reasons for your decesion?

How about a little context for the question?

steve2010 said:
...why chose owning a sailboat over a powerboat?
Click to expand...

Functioning in concordance with wind and water was more appealing than being an interloper.

... or is "owning" a key term and your question revolves more around internal combustion engines, drive maintenance, taxes, registration, and insurance between boat types?

I am a dyed-in-the-wool Laser sailor, have been so for decades, and will probably remain so until they pry the tiller extension from my cold dead fingers. However, my son recently bought a powerboat and after a trip with him and his wife I can now see the advantages of powerboats too. Here are my Top Ten Reasons Why Powerboats Are Better Than Sailboats. Hope they provide food for thought and help you in your decision.

10. People... family, friends... will now go and visit my son and his wife so they can have rides on their boat.
Click to expand...

You may have a point with that one..., freeloaders can be such a drag. 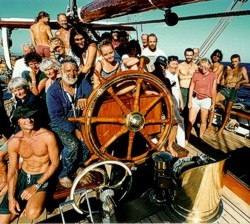 Dude, Get on plane, hiked out, spray in your face and you'll have your answer.

Tillerman said:
I am a dyed-in-the-wool Laser sailor, have been so for decades, and will probably remain so until they pry the tiller extension from my cold dead fingers. However, my son recently bought a powerboat and after a trip with him and his wife I can now see the advantages of powerboats too. Here are my Top Ten Reasons Why Powerboats Are Better Than Sailboats. Hope they provide food for thought and help you in your decision.
Click to expand...

Having looked at your "top ten reasons ..." many of the reasons you give relate to the type of boat rather than it being a "power boat". Get a cruiser (of offshore racing yacht) and most of your reasons for "better" will apply plus you can add several extra reasons as well.

True you clarify your "Top Ten ..." as being reasons why your son's boat is better than a Laser but that limited comparison excludes too many other possibilities.

It is easy to counter every one of the "Top Ten ..." points but each counter (and additional points) would be in relation to my own taste and what I enjoy. So it comes down to what gives you pleasure and for most people it is more than one thing.

Sometimes the environment you first experience something can have a dramatic effect on how you then view it long term. If you first experience in a big powerboat is on a damp overcast rainy day with the exhaust fumes blowing back onboard, wallowing in a heavy sea with one engine not working and the other sounding "iffy", with a stroppy skipper for whom you can do nothing right, etc. and you might have a long term negativity towards them. And vice versa.

We own both. I prefer sailing... However i also enjoy slalom skiing.
Sometimes when it comes time to go to the lake and friends come along it is hard to cram 6-10 people in a C22 or a Laser II. However with the Ski boat, all can enjoy, even if it means towing the tube. (I diss like toobs!, but not everyone wants to learn to ski or wakeboard).

We tow the ski boat behind one truck and use the other truck to tow the 5th wheel with the sailboat behind the fiver. Ski in the morning and evening when it is calm, and sail the rest of the day.

You can't ski behind a sailboat (well, most of 'em!) - but in the long run, powerboats get boring to me.
M

Why did I buy a sailboat over a powerboat?

Cost is one reason. While both require upkeep, a sailboat is easier on the wallet on a daily basis than a powerboat. Foot-for-foot, I think you get more value in a sailboat and a sailboat for a given length tends to be cheaper than a equivalent powerboat.

Yes, sails, engine maintenance and rigging can be expensive but they tend to be long term costs over a period of several years. Up to mid-30s in length, even replacement usually won't get close to the cost of one decent engine repair on a powerboat.

Two, wind is free. A few gallons of gas lasts me a season. When gas was touching $4 a gallon, that becomes a very serious consideration in going out casually or bringing friends. I have no problem inviting friends and colleagues out on my C-27 but would feel guilty doing so on a powerboat and expecting them to chip in for fuel.

Three, sailing is peaceful. I sail to relax on my cruiser. Just tooling around the Bay puts me in a different world.

Four, sailing is technical. There is something appealing to being in control of how the boat gets somewhere rather than drive the throttles forward and turning the wheel. I like that connection to wind and wave.

Five, water skiing is fun but I think the rush of hiking out over the side of a dinghy or small keelboat racer is better than any iron horsepower. Plus, when you tell co-workers what you do for fun on Tuesday nights, they look at you like you're crazy.

I have nothing against powerboats. I expect we'll own one eventually in addition to one or more sailboats.

Because theres no point going afloat unless you have a sail to play with to my mind. Powerboats are just very very boring to me.
C

Since i was a child, my dad and i where doing catamaran. Sailing is now our Father/Son activity and it's nice like that. I really enjoy sailing when you're going at a nice speed and you ear nothing exept the wind and the water. I like the way the skipper can make the difference vs a power boat that you just push on gas... SAILING IS JUST AWSOME to me.

sailing is an activity unto itself - power boating requires a destination, activity, or others for pleasure.

sailing can include those other things, but doesn't require it for fun.

last saturdayi sailed alone around the bay for 5hrs. when i explained, nobody had to ask me what i did - i was sailing. had i been in a power boat alone, motoring in the bay it would have seemed/been insane unless i was fishing, tubing, skiing, or what-have-you. plus i would have had to pay causeway fees, ramp fees, gas - ugghh 5 hours of gas?

but if i was stuck on a desert island and had to choose...

I for one like both. Love my laser ..... love doing deliveries and racing on bigger sailboats ...... and I love running races, going fishing, and beach camping in my 18 ft RIB with 90 horse on the back.

My power boat is very fuel efficient, light to tow, easy to launch, and great to take on camping/fishing trips.
F

I do both. They both appeal and since I'm on Lake Huron, days that aren't good for sailing are usually good for powerboating and vice versa.

Merrily said:
How about a little context for the question?
Click to expand...

What you can't do in one, you can do in the other.
D

Sailorchick said:
Because theres no point going afloat unless you have a sail to play with to my mind. Powerboats are just very very boring to me.
Click to expand...

Many years ago I decided to learn to fly and tried both small airplanes and gliders and almost immediately gave up on powered because it is just like driving a car (and driving down my local motorway is a lot lot cheaper). Gliding involved a lot more skill (mess-up your landing approach and you don't get t o round and have a 2nd chance). In fact I found gliding just like sailing in all 3 dimensions.

It was the sound of water, waves, and wind for me. I work in a mechanical enviroment, and I like the sound of a high performance engine, but sailing is a more relaxing sound to me, so much nicer than the buzz or roar of a power boat.
Z

Anyone can driver motorboat, that is not a big idea. To sail you should think, feel wind and water. Of course oil cost and wind is for free

When was the last regatta you saw for power boats.

lol
I love my sunfish i love sailing everyday.
In school i doodle starts and different tactics.
Without sailing my life would be allot more boring.
M

soloution buy a sailing boat with an outboard

Sailing and especially racing are always fresh, new and exciting, it never gets old

The feel good you get from sailing is long lasting

I spent a winter rebuilding a jet ski and once on the water got bored within an hour. Then I got an old Laser and don't think I'll touch the PWC again. Sail and paddle power are the only things allowed on the lakes closest to me.
S

Sailing is more nature involved. No motor noise. It creates a sense of adventure depending on the weather.
K

That's actually a question about motor sports in general. Dirtbike vs. mountain bike, car/truck/motorcycle vs. bike/run/walk/backpack, snowmobile vs. XC skiing, etc. Motor sports always seem like cheating to me. And I've never been turned on by speed unless I'm responsible for the speed. (Fastest speed on a touring bicycle was 54mph - now *that* was fast!) I get to go fast in my car all the time - so what? My family just did a 9-day trip backpacking Isle Royale. I remember most of every backpacking/bike touring trip I've ever done, but motor touring is mostly forgettable.

Besides, I expect gas to get ***much*** more expensive, but wind is always free.

I d0 both, but can't beat broad reaching in a laser in a Force 5!
K

You can't ski behind a sailboat +1

I've always had family and friends with power boats of all types. It's good to get from point A, to point B. Hell, I'm hurling the whole ride while deep sea fishing. But had no problem ocean racing on a forty footer. Sailing has always been a journey. It's like surfing, it's that whole connecting to mother nature thing-
S

My parents wanted to make me more cultured

Sailboats don't smell like half-burned fuel and I don't have to complain about how much I spent on gas at the end of a fun weekend.

Depends on the use. In general, motorboats are cheating, but there are occasions when you have to go over to the dark side. When I used to Scuba dive, motorboats were pretty much mandatory. Same for Race Committee and rescue boats. For all other things, I use sailboats.
E

Sailing = skill...powerboats are cool for a day or so but then they are just a bit boring or for the super rich who just wanna kick back
P

Have done both, have an old 27' power cruiser, a canoe, and we are looking to buy a used fish for my daughters who sail in their HS sailing club. Had a Minifish more that 30 years, and 50 lbs ago, which was a blast to sail, and have sailed Sunfish occasionally since. Different experiences, both fun, both o.k.

I guess because I was born doing it and enjoy it more.