I'm trying to get some old laser's going again, and I am wondering what size of split rings I should purchase to replace the old ones, and if I need a specific type for corrosion reasons. Also, is their any advantage to using the old 2 part travelers, or should we purchase the new ones like this: ILCA Traveler Block Harken

Thanks for your help

Picture of split ring attached if anyone doesn't know: 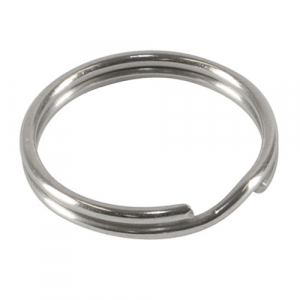 Not very critical. Anything goes that's not too bulky (that would get in the way of lines or other fittings), and isn't too small for your fingers. Mine are about 10 mm internal diameter. Nothing that West Coast Sailing (or your local chandlery for that matter) sells is likely to have any corrosion problems.

The original Allen traveller blocks are fine as long as they're running and aren't broken. Just wrap a ton of the stuff you put on hockey stick blades around the connecting hooks so that the blocks move as little as possible relative to one another. Of course the Harken block is nice, but probably just a waste of money for your purposes.

Thanks for you reply, very helpful. Another question: Are there any disadvantages to storing lasers on docks, as long as the hull stays out of the water?

NorthPacificDinghy said:
Thanks for you reply, very helpful. Another question: Are there any disadvantages to storing lasers on docks, as long as the hull stays out of the water?
Click to expand...

Be careful that whatever supports it doesn't cause the hull (if stored upright) or deck (if inverted) to be flexed, making a permanent distortion in the shape. Many trailers and dollies support Lasers by the gunwales to avoid this problem.

I've used a thing I made from scrap plywood to support my Laser by the gunwales near the transom, with a cushion under the mast tube, when storing it upright.

i bought the entire boom kit. i made the mistake of riveting the block on via the strap. it would be really nice to be able to remove that block sometimes so if you do that, get a swiveler or a shackle or something. just my 02. ymmv.

i picked up an entire bag of the stainless cotter rings from mcmaster with the tang that makes it way easier to remove them and install them. i measured the wire thickness on the existing and came up with the 3/16"- 1/4" pin dia ones. cant remember the wire dia. they get lost easily and its nice to keep them in my tack bag that goes to the boat with me every time. my boat has probably 10x more than a standard but drop one in the grass or in a parking lot at the ramp. pita!
You must log in or register to reply here.
Share:
Twitter Reddit Email Link
Top