What knot do you normally use to tie the halyard onto the upper spar...

I was told to use a timber hitch knot but doesn't that knot come undone without a force pulling it to keep the knot tight?

I've used a double clove hitch with good success. Along with some white electrical tape on the upper boom above knot to prevent the line from slowly sliding up.

I also found that the relative "stiffness" of the halyard makes a difference. I recently upgraded the halyards on 2 of our Sunfishes with very low stretch line. The line is so stiff, it's hard to coil. But once you get the knot tied and snug, it doesn't become loose.

In contrast, when I've used a "softer" line, it's hard to keep the knot tight.

I'll try that one out. Thanks. 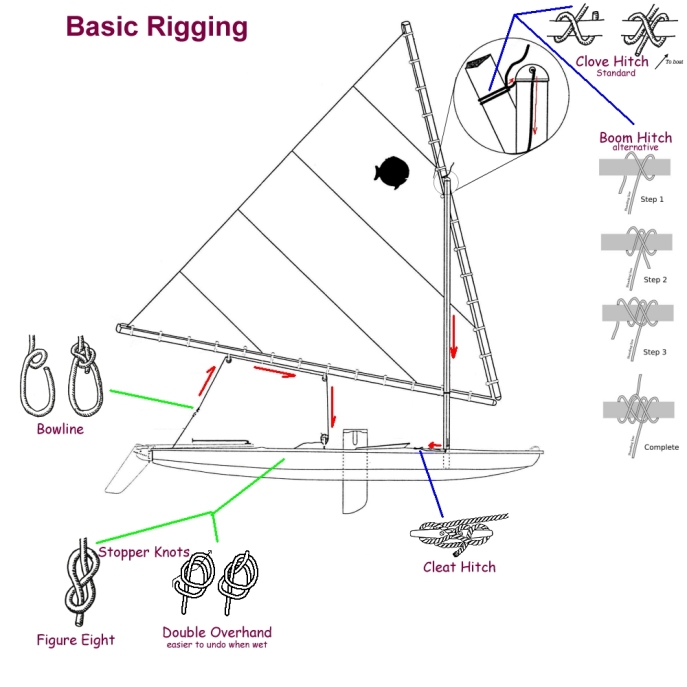 Once again, my old-school laziness and/or my land-based upbringing is the cause of some minor embarassment here. I use what is commonly known as a "plain-old-knot" to afix my halyard to the upper spar. BUT since I don't want it to come loose, I put two wraps around the spar first, then tie it.... so I guess the technically correct term would be a "double-wrapped plain-old-knot."

It's fairly simply to do. Instead of trying to remember when to make a hole, or when the rabbit is supposed to come out and then back into the hole..... you just wrap it twice, and tie it up nice and tight like it was a fencepost or something.

Now I am sure that some folks will think that my simplistic knot-work is an indicator of a lack of respect for the more knotty-minded among us... but they'd be wrong. I have a great deal of admiration for those guys who can tie a double sheep-shank whilst standing on a raining deck at midnight. Unfortunately, i know that I'm not that sort of guy.... BUT I do know that my double-wrapped-plain-old-knot works quite well for holding a Sunfish Spar and that's good enough for me.
F

trist007 said:
I was told to use a timber hitch knot but doesn't that knot come undone without a force pulling it to keep the knot tight?
Click to expand...