OK, so I scored a super sunfish free by the roadside last year, worked on it this spring, and thought I had her sealed-up, but no. Took it out on a windy day and collected a bunch of water in the hull. Thing is, I added an inspection port between the centerboard trunk and splash guard, and a drain-plug on the transom, but even after getting small amounts of water out of those spots there’s still a bunch hiding out in the hull. You can hear it sloshing and feel its weight when you tilt the boat side-to-side. BTW, I built a ramped boat stand, so the boat is entirely out of the water, and tilted down toward the bow (and transom drain).

I beached it and tried using the “official” sunfish drain on the deck, but still nothing came out. I suspect that if I flipped the boat upside-down on sawhorses again it would come out that way, but where could the water be hiding??? I wouldn’t be opposed to adding another inspection port, if that would help me locate the water (and address the leak), but where to put it?

Any help or advice would be greatly appreciated- thanks!
H

Interested to hear as well. I too put a new plug on my fish. Drained a decent amount of water yesterday after an hour on Barnegat Bay, but could still hear some sloshing around.

We put the new plug near the rail akin to the factory plug on the other side. We tilted the boat on its side and inverted to get the best flow to the plug hole. Still heard a little sloshing afterwards. Next steps are to pressure test next week and then repair from what we learn.

Yes, next step is a leak test. Watch Signal Charlie’s video, search ‘leak test’ on this forum. Most likely culprits: daggerboard trunk, mast step (fill mast hole with water and it shouldn’t drain out), edges around aluminum trim... or those stern drains you added. But those are just guesses. A leak test will give you answers. Remaining water in the hull will probably require two people to tilt the boat on its side, lift each end toward the drain, or put it on sawhorses and move water toward your port.

Damn, this cold beer tastes good, LOL... before I go watch some entertainment, I'll throw out a possible scenario or two. A previous owner may have used expanding foam inside the hull, and that foam is now preventing water from draining properly. Also, you may have debris of some sort blocking the drain, I had a similar problem in my old Laser hull with bits of degraded sheet plastic blocking the hole. Dunno if the plastic came off the original foam blocks or what, but it was a PITA to extract from the hull over time. Check to see if any debris is blocking the drain next time, aye? Okay, I'm done, this beer has me fired up for some action on the 65" curved screen, LOL.

I haven't had occasion to install an inspection port near/at the rudder.

Looking at some installations, it seems there could be a white styrofoam "trap" formed there by/at the factory. Could that be where residual water can be sloshing from? My residual water seems to collect amidships.
J

Thanks for the replies and suggestions! I think I found the main issue - a repair I did along the keel simply did not hold. I used some sort of marine grade epoxy/filler they recommended at WestMarine, but it either didn’t cure right, or just didn’t hold-up. Now it’s gone, and I’m wishing I’d gone with my instincts and used fiberglass cloth.

It’s a pretty nasty wound along the keel, and you can move it with one finger, but before she hit the water it felt hard as nails after my repair, so I thought it was good-to-go. I have the boat beached - hopefully the water is almost out, and then I’ll re-address the problem. Once that’s done a leak test seems to be in order. Any advice on a structural repair? I’m thinking another inspection port might be needed so I can get at it from both sides...

BTW, I did a mast step test - no leakage. The transom drain was added after the problem arose, so not a contributing factor, and the factory drain looks clear after a flashlight inspection. The keel damage seems like the culprit.
S

Send pictures of the damage
J

Here's a couple pics of the damage (about 6" in length), and the epoxy filler I used initially. I'm tempted to use the same stuff, (which had set-up really well before getting wet), and glass over it with cloth and resin. But maybe it needs more of a structural repair? When I push it in with a finger or two it gives easily. After my initial repair it felt hard as nails, but either I messed-up the ratio, it didn't cure right, or this stuff ain't really waterproof. Thoughts? 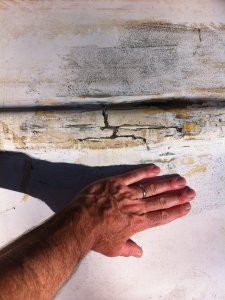 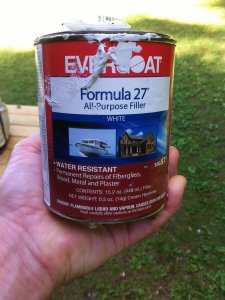 When I first got my boat it had damage that looked similar to your picture. Digging into it, I found the glass was split/broken all the way through the hull. I hope I am mistaken, but my guess is that your boat has that damage as well. On my boat, I ended up grinding out the damaged glass, there are threads and videos aplenty on this, and laying in new fiberglass. I then faired the repair and "painted" the area with gelcoat, which I wet sanded smooth.

Hope that is helpful. Good luck!

Jimbob23, you likely have structural damage to the fiberglass. That filler likely only filled the surface cracks in the gelcoat, but as soon as the area saw new pressure/loading, the damaged fiberglass below flexed again and the filler won't do anything for that.

I'd get rid of that cr@ppy, spongy, damaged glass and rebuild that particular area...

Looks to me as if someone dropped the boat off a trailer or vehicle in the past, that can lead to the sort of damage shown in your pics. As Tag said, filler is no good for this sort of repair... best to tackle the glass-rebuilding job and get 'er done, that way the problem will be solved. Don't sweat the location, everything can be rebuilt, including the keel, the important thing is to make sure you get rid of all the rotten damaged glass... once you make like a surgeon and cut that cr@p outta there, then you wanna fair out the surrounding area so the fresh resin & glass you lay down will form a good strong bond. You'll need some sort of backing when you do this, a form upon which to build... and you might need to install an inspection port topside (or in the cockpit) to make life easier, can't tell from your photos. Good thing about an inspection port, you can beef up the repair from inside the hull as well.

Damage like this is precisely why I prefer working with resin & glass rather than filler...