I dragged out a Sunfish from under my in-laws' deck after 25+ years of sitting and confirmed that it still floats and sails. I'd like to be able to take it to the larger lake nearby, so am looking for a way to trailer it. I would also like to store it on the trailer rather than in the dirt as before. It appears that some of the trailering solutions include a dolly, which would ease launching at the lake the boat lives on. However, this is an old boat in fair condition — I'm hoping to find an inexpensive trailer setup until it becomes clear whether my kids are really interested in sailing.

Consider a Harbor Freight store trailer. With their usual 20% off coupons, you can often get one for about $300. Two of my friends have them and like them.

I didn't see anything boat-specific.

HF used to sell a nice boat trailer for up a 15' boat., Maybe they don't sell them anymore.

We sell Dynamic Dollies, free shipping. $495 USD. Send us a PM if interested. 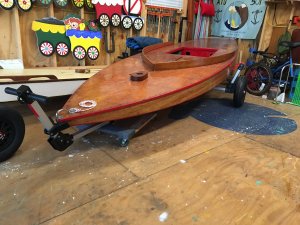 Thanks for these ideas. I'm keeping an eye out for used PWC and Jon boat trailers. And would consider modifying a 40x48" Harbor Freight utility trailer if I get desperate. Trying to keep the trailer cost under what the boat is worth

Staff member
We took pictures of trailers at the Sunfish Masters a few years back, might get a few ideas: Small Boat Restoration: Sunfish Trailer and Dolly Extravaganza

Goodbar said:
Something like this 4x8' utility trailer? Then add bunks?
1195 Lbs. Capacity 48 in. x 96 in. Heavy Duty Folding Trailer

That HF trailer is designed to carry 1200 pounds of load. It has a three leaf suspension. Your sunfish with mast, rigging, sale, etc. will only be a couple hundred pounds. I think it would be difficult to configure the trailer so that the sunfish has a soft ride. My two cents...