so a few months ago, I saw an small fan mounted to an inspection port cover for sale at Intensity Sails, but at $80, it was a bit out of my price range.

talking about it with a co-worker, he mentioned he probably had an old computer tower we could just take a 12V fan out of... and sure enough we found one. we also rooted through a pile of old cell phone type charger cords, and found one that was very similar in voltage and amperage to the fan, so I spliced the converter cord to the fan wires for plugging the fan into a normal house outlet.

I mounted the fan onto an extra inspection port cover, with the top cut away behind the fan. the dimples in the cover for the handle/grip are sort of in the way, so the cut-out doesn't match up exactly with the diameter of the fan, but it's good enough for a home-made 1st attempt. I also glued a piece of screen to the back to keep out bugs and critters when the fan is installed.

I just installed a new inspection port in my new(er) Sunfish this weekend, so this is how it all looks. now, after a sailing adventure, if I notice any moisture inside the hull, I can plug in the fan and let it dry out the boat for a while. when I am ready to go sailing, just unscrew the fan, and put back in my other port cover and go sailing. 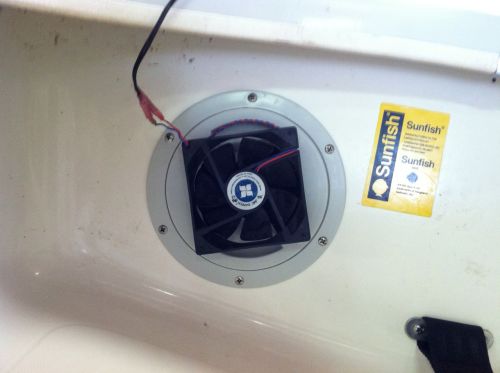 what do you think? I only had to buy an extra inspection port (for the cover), so I'm only out $10 or so. not a bad deal at all.

Nice! I was think about doing the same thing. Computer fans can be had cheap or free, and I've got tons of chargers I could cannibalize.

I've got the fan. working on the charger. But how did you wire yours? this fan has a red, black, blue and white wires.

Garrett12 said:
I've got the fan. working on the charger. But how did you wire yours? this fan has a red, black, blue and white wires.
Click to expand...

Im thinking you just use the red, and black ones. the other two are useless in this situation.

some computer fans have wires to report back the fan speed and temperature - that's probably what the 2 other wires are for. I would suspect it is the red and black. you can play with the various wires to check. depending on how you connect them could change the direction the fan spins - I think in my case, it would only spin in one direction, though, so connecting it backwards didn't do anything.

I used the red and black wires. Here is a picture of my completed project. FAN: free (picked up from local transfer station) WOOD, SCREEN & POWER ADAPTER: free (had laying around the house). Having a light & dry fish... Priceless.

Another idea: Buy a 6" heat duct fan from Home Depot (about $17) It fits neatly in a 6" dia. inspection port and runs off regular household current. I have used one for several years and it is still going fine.

I use a little blower i had laying around from a fireplace insert. mounted dryer vent hose to the fan and let it suck air through the hull. makes it easy to just open ports vent hose pops in tight, and you can smell the air pulling out of the hull. This makes it easy to "smell" the moisture coming out, and know when its good and dry.

Is it better to push dry air in, or suck the moist air out?

I bought a 6" Duct Fan that was pre-wired (so I just plug it into the outlet). It fits perfectly and is doing a great job! I simply unscrewed the inspection port, and stuck it in the port. It also works for leak detection work. I think I paid $45 because it was already wired. PS- I got the idea from all of your input(s). Thanks!

Garrett12 said:
Is it better to push dry air in, or suck the moist air out?
Click to expand...

I'm not sure - mine is set up to suck the air out.
I really think just adding air flow is what helps.

Dont forget to have a vent somewhere (drainplug open or other hatch open) to keep the airflow moving...

Garrett12 said:
Is it better to push dry air in, or suck the moist air out?
Click to expand...

I asked the same question. And I did suck the air out for a few days but I concluded it was better to blow it in. Using the duct fan method, I also found a few "leaking spots" in the hull by slowly dragging a piece of christmas tree tinsel all around the boat. Found that my auto-bailer was a source of a leak and repaired this area by 1) sealing the area with 3M 5200, and 2) installing a new bailer.

WThweatt said:
Dont forget to have a vent somewhere (drainplug open or other hatch open) to keep the airflow moving...
Click to expand...

If you don't have another vent, use some flexible ducting to direct the air deep into the hull—and off to one side.

This is the time of year to dry our Sunfish out.

This diagram of airflow is for vertically-mounted ports in the cockpit bulkhead:.

I've seen this set-up being used on (in) yachts that are stored on shore under a tarp. In order to get a 'fresh' atmosphere inside, two or three fans do the trick. Must add that I've seen them hooked up to a small(ish) solar panel! The sort that you find on top a deck of a yacht.

Here is another thought. When I dry out the interior of a Sunfish hull, I used the aforementioned 6" dia. 115 volt Home Depot ($17) duct fan in the 6" inspection port and then install a 4" port on the aft deck under the tiller. My thought is that the smaller outlet hole forces the airflow into all the little nooks and crannies of the interior as there is a little positive air pressure in the hull (see photo.) To be honest, I am not sure my physics is correct, but I do notice the fan has to "work " a little harder with this fan is first inserted and there is a very good flow out the exit port. I am a little leary about using it for leak testing as I don't like to mix soapy water and household electricity but the 12 volt fans would be safe.

If the outlet hole is smaller or the same size than the inlet you will end up with positive pressure. You're
in effect backing the air up to the inlet. If you completely cover the exit hole you'll hear
the fan bog down. The outlet need to be bigger by a certain percentage depending on
velocity of airflow and what-not. Been awhile but the math is used for cooling aircraft
engines. I've done pretty much what you're doing by sticking the fan in the bigger port
and it works fine but now that you mention the subject I'll probably stick the fan in
the smaller port next time.

If you're plugged into a ground-fault interrupter you should be OK. Without a optical isolation
circuit it is possible a short could send 110 AC mains power down the line to the 12v fan. One of
those "Low probably/High impact" situations that life seems to favor.
You must log in or register to reply here.
Share:
Facebook Twitter Reddit Pinterest WhatsApp Email Link
Top