My sailing club (the world famous Muscle Shoals Sailing Club in northwest Alabama) has given me the task of rebuilding - or tearing down and building new - our old (30+ years) Laser and Sunfish storage racks. Have any of you seen any particular storage rack designs that have impressed you with their simplicity and functionality? Just to be clear, I'm talking about permanent storage racks for multiple (12 to 15) small sailboats. It will have a permanent roof and at least one side to help shield the boats from the weather. Any thoughts or ideas will be greatly appreciated!

Not trying to be troublesome here, but I thought it was Mussel Shoals.

I do believe there is a Mussel Shoals in California...but indeed our area is referred to as "Muscle Shoals." There is a considerable amount of kidding about this name. The story goes that it should have been named "Mussel" Shoals in recognition of the large number and size of freshwater mussel middens from native habitation along the Tennessee River. However, it is likely that the spelling was a bureaucratic mistake. Cleverly, the locals came up with an alternate reason for the name and said that - since the shoals referred to large rapids - that the "Indians" used to say that it takes "heap big muscle to paddle up the shoals." Sounds fishy to me, but that's the story of the name of our beautiful area.

And that's the truth!

AQBill said:
Have any of you seen any particular storage rack designs that have impressed you with their simplicity and functionality?
Click to expand...

Over the years the majority of club racks I've seen or used were boat-size pigeon holes of either angle iron or steel pipe with carpeted wood bunks. There are fancier aluminum racks, but DYI steel works fine where the racks don't need to be moved at the end of the season. 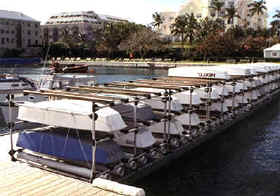 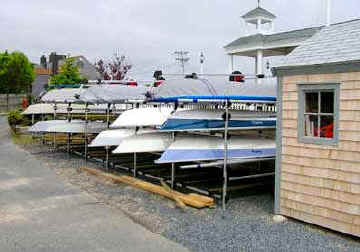 City of Evanston, IL - Parks & Rec Dept.​
A roof, where one existed, was attached to riser extensions of the rack uprights, supporting a lean-to roof of roll roofing covered plywood -or- car port-like corrugated fiberglass.