South of the border; Nautos?

Any one using Brazlian gear from Nautos. It's priced cheaper than other companies , Just installed one of their 57mm Rachet Blocks and it performed well in 10 knot + winds.. The distributor is based in Ft Lauderdale but has quite a few outlets.

I installed a Holt Nautos 57mm on the Minifish for my boys. As far as I know, it's working just fine and was quite a bit cheaper than the Harken 2135 I usually put on a Sunfish.
I bought it from the forum sponsor, Intensity Sails (Holt Nautos 57mm Manual Ratchet Block).
W

Intensity is listed as one of their dealers on their website. I first learned of Nautos from the Force 5 website.

I think (?) the Nautos mainsheet ratchet blocks are factory issue for a number of small racing classes, Sunfish included. Maybe a dealer could comment.

One good thing in their favor is price. Don't feel like you have to take a bank loan out to purchase a piece of equipment.

What happens when you've already got one?

Which one would you chose to install as your only mainsheet block on a Sunfish? 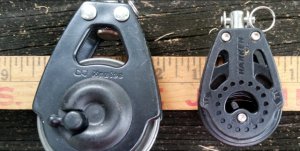 but "Holt" maybe the former "Holt & Allen" of Britain—the manufacturer of my "bayonet-mount" inspection port, among other marine items.
L

but "Holt" maybe the former "Holt & Allen" of Britain—the manufacturer of my "bayonet-mount" inspection port, among other marine items.
Click to expand...

Jack Holt and the Allen brothers combined forces in the 1950s to produce and sell boat equipment under the name "Holt-Allen". I understand that the companies were still officially separate - Holt did the marketing, while Allen built the stuff. Holt bought half of Nautos in 2007 or 8, which Allen apparently didn't like (your work outsourced to Brazil admittedly doesn't sound good) so they split again.

Allen still manufactures just about everything that used to have the name Holt-Allen, now just "Allen". Holt sells a few of the same old fittings as "Holt", but has mostly new designs on the market. There's a lot of old Nautos stuff that's called "Holt" now, and there's more that's still called "Nautos". And the whole company is called Holt Nautos, maybe. It's a bit confusing really.

(Btw, I would pick the smaller block.)
W

A check of the companies website reveals..in somewhat broken english that it has expanded into different products but still manufactures sailing hardware. It is now known as Nautos Metal Manufacturing LTD. and is based in Brazil. Tel given is 554+(54) 3026. 1600.. It gives its DOB as 1976 as a sailing harware manufacurer.. It has distribution centers in the U.S. (Ft. Lauderdale) and Europe.
You must log in or register to reply here.
Share:
Facebook Twitter Reddit Pinterest WhatsApp Email Link
Top