Screw holes that go all the way through the fiberglass

I'm restoring a 1970 something sunfish and I have screw holes in my boat that are shot all the way through. I have filled all of the other holes with epoxy and I'm not sure what to do with these. I think that putting a sheet of fiberglass over the top is a bit excessive but im not sure what my other options are. Theres no wood backing and I can access both sides with a view port. Any ideas of ways to fill them without having resin run through?

Depending on whether these holes are going to be reused (like under the splash guard), thicken the epoxy with a West Systems product or moosh some fiberglass threads into the holes. There's always Thixo ($22).

Inject resin with a disposable syringe, turn the hull upside-down and wait out the cure.
C

Limo7757 can you send pictures?

If you can access the underside of the holes put tape over them so the resin can’t run through. Otherwise use thickened epoxy or Marine Tex or Thixo as LV mentions.
L

Thank you for your responses! These holes are from what used to be the anchors that held down the coaming. I was considering filling them and redrilling holes, but I think I am going to use bigger screws with nuts and washers to hold the coaming to the deck.

I had the same problem: postage stamp-sized holes were left when the splashguard got ripped off. The previous owner had repaired the splashguard using plastic drywall anchors.

I epoxied thin scraps over the holes, and drilled new holes. (The underside of the splashguard is cupped, allowing space for such repairs).

It's a drywall anchor, but Stainless-Steel. It takes a ¼"-20 bolt. (Another license-plate bolt).

I'd epoxy them reversed (upside-down), which is an easy "flip" before you start. (Once set, pull the plastic parts away). Bought as "singles", they're kind of expensive—$4? (So shop around the Internet). 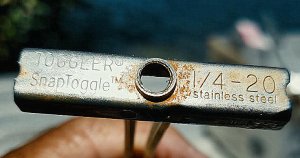 L&VW said:
Depending on whether these holes are going to be reused (like under the splash guard), thicken the epoxy with a West Systems product or moosh some fiberglass threads into the holes. There's always Thixo ($22).

Inject resin with a disposable syringe, turn the hull upside-down and wait out the cure.
Click to expand...

I'm replacing the previous owner's huge cleat for the halyard, and had six holes to fill.

The hull is upside-down. The syringe came with a $19 West System repair kit. 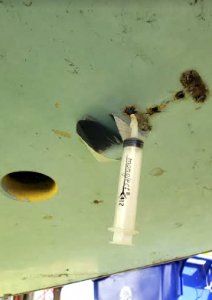 L&VW said:
I'm replacing the previous owner's huge cleat for the halyard, and had six holes to fill.

The hull is upside-down. The syringe came with a $19 West System repair kit.

Why have the hull upside down?

Breeze Bender said:
Why have the hull upside down?
Click to expand...

The syringe arrived with a curved and tapered "needle", so spreading the Thixo around inside the hull was easy. The original tip was too narrow, so I cut the needle part about in half.

Sometime in its lifetime, this Sunfish's deck received an excellent blue paint job. I don't want to cut an inspection port into it, and hope that the missing wooden backing board won't become a problem.

Using an expired credit card, I've flattened a thin layer of additional Thixo to the deck. (The yellow color is the original gelcoat). This new layer should bond with the six filled holes—making an invisible bracket. Since the two new screws will be "in-shear", this repair should last a very long time.

I'd like to know if a factory Styrofoam block was installed below this cleat, as adding a backing block by cutting through the bottom would be a preferable repair. (The repair would benefit the strength of the hull).

The old cleat (pictured) was always in the way, and some misadventure (with it) may have caused the bend in the boom!

This Sunfish's splashguard is getting its third re-installation! 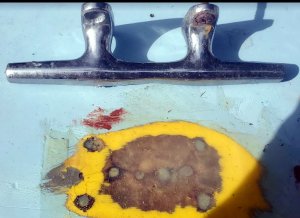 Thanks for that explanation. I get why you don’t want to cut a hole in your nice blue deck, but that halyard cleat will need a backer, don’t you think? I’d add a mast cleat to relieve the stress on the halyard cleat.

Staff member
I think L&VW might get away with that repair, esp on an older boat where the fiberglass is just a bit thicker. We had a boat for years that just had bigger screws for the bridle eyestraps, the deck was thick enough to hold the screws plus we put in a squirt of 3M 4200.

The anchor remedy is extreme, it leaves a big hole. The meatal will also rust quickly and size up any fastener. I'd consider looking at the similar plastic anchors or I have used screw in plastic drywall anchors to fix the cockpit toerail on a Barnett Butterfly....after muttering unkind words about the corroded molly bolts I had to cut off

Skipper tested them out, they worked great. 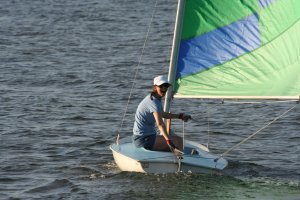 This was during our Barnett Butterfly phase, great boats but that 18 foot mast is a bear to step by one person. Fortunately it breaks into two parts for transport. 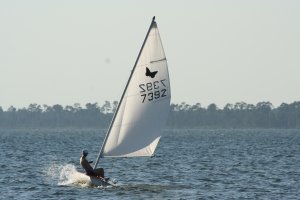