So a while back had a disaster with Capri (I call her my mistress!). Mast support beam cracked, just enough to drop mast about 1/4". Was sailing under sporty conditions, lots of strain on the rigging! Discovered that the wood was moist and deteriorating. Saw another thread where similar happened, and skipper made a huge effort to repair the beam. Cut out the bad beam and fiberglassed a new one in.
I could probably do the same but don't have the time, so I consulted with a pro boat repair guy. We came up with the design you see here. His first thought was to run a pipe down to the keel board, but that would have destroyed the slick battery system that I made. So we cantilevered across the top with his clever piping design. And sandwiched with composite board above, bolted through a flange connected to pipe below. Just cranked up on the pipe union piece to add support pressure. Also installed composite boards on both sides, secured to the original boards, to provide solid anchorment for the flanges on the side.
I've had a bunch of sporty outings and the repair holds solid. Now as we know, without the support being repaired the sailing days for Mistress would be over. I've put a ton of $$ and time into refurbishing this old 1986 Mod 1. Only paid $1200 for it 5 years ago, and I can say that this repair cost me a heck of a lot more than that! But I recovered about half of my season, plus saved my boat from the dumpster! If anybody needs work done on their boats I could put you in touch with him, he ain't cheap but the quality of the work is worth it. I'm in the Chicago area.
Also see the jib set up I use rather than spending $500 to convert to roller reefing. Had nice brass hanks installed, A bit of small line and a $2.00 fitting did the trick. You keep tension on the halyard with tag line, makes it easy to raise/lower jib, tie it up in a tube on the deck. Now without a tiller tender to keep your helm this setup would not work. You can see it on the bottom of tiller on my boat shot.
Finally see the snugger tubes that guide the boat into position. Put some matching colored tape on them to hit the perfect depth for trailer immersion.
There's a bunch of other stuff i could expound upon, that will come another day.

I'm impressed you've got plumbing on your sailing dinghy

That's a pretty unique solution! Glad it is working out.
I like your snugger tubes. Definitely on my list!
A

Yep gotta give my boat tech credit for that idea. Like I said, he was super pricey, but worth it. A new Capri 14.2 would probably cost about $5k, so I'm still $$ ahead!
M

Concerning your modification/addition of the jib line. It looks by the photo that you have one end of the line attached to the top attachment point of the highest hank-eye, then you run the line down thru each of the hanks, then back thru a clevis fitting, then back to the cock pit. By keeping tension on the line when you raise/lower, I am guessing it tries to straighten out the jib for easier travel up/down the stay wire? If I am seeing it differently, please help me out.
A 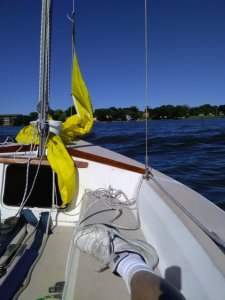 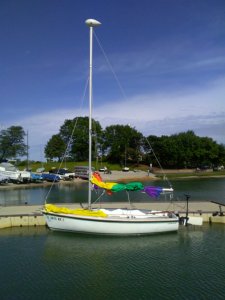 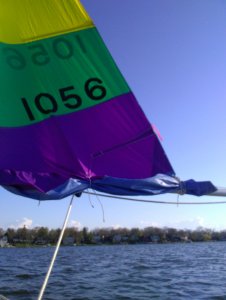 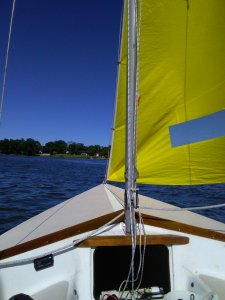 OK there's the way my system works. See the thin white line that runs through the hanks, you pull against the halyard to drag down the jib, also keep some tension on one of the sheet lines, this will prevent the sail from getting wet. I pull it into a tube and put a few ties on, then it's sitting pretty. Now none of this would be possible without my tiller tender. Also see how rigging's set to motor out before hoist/lower. Most places I sail require some manuevering to get in/out of launch. This is a baby version of my old Catalina 22 in so many ways!
You must log in or register to reply here.
Share:
Twitter Reddit Email Link
Top