Questions regarding a 95 Graffiti Edition?

Is anyone familiar with this edition and builder of this Laser? The hull ID is SLIF5471J495, also has anyone used the Intensity sail, mark two? Does anyone have a extra class legal sail they would be willing to sale? Would appreciate and feed back you could give. 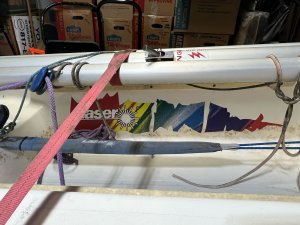 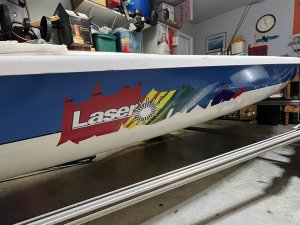 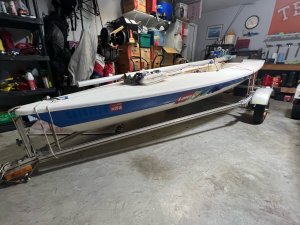 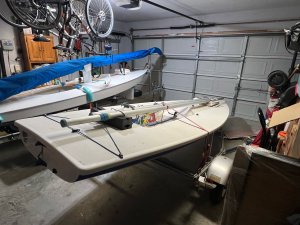 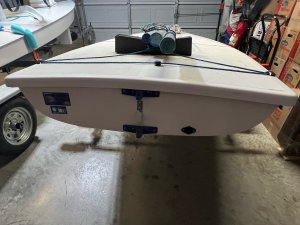 Should be able to find some good information if you use the Search tool and enter: Special Edition Lasers
L

155471, Sunfish Laser -built in October 1994. Typical SLI colour of the time; for example, half of the '95 Youth Worlds boats they provided looked just like that. (The other half had yellow topsides.) Been apparently stored gunwale-hung and indoors, probably a nice boat after some cleanup and replacement of obviously-original lines, hiking strap, etc.

But does it really say "Graffiti" somewhere? We had some conversation about that a couple years back in the thread whose name ProATC mentioned

I couldn't find anything on the boat or near the graphics that has Graffiti on it. Are these graphic boats fairly common? Also which factory built this boat? The SLI in the hull id according to the Coast Guard MFG chart shows Slipstream Watercraft from N.Y. Was this a major builder for Laser?
L

I already answered that

but let's do it again:

SLI = Sunfish Laser, Inc. North American builder of Lasers from 1991 through 1996.
The graphics in question were an option around 94/95. You don't see those boats every day, but they're no great rarity either.

Thank you for the info.
L

You're welcome! Sorry that I wasn't clear enough at first

Anyway, the "codebreaker" itself is at Laser Serial Hull Number Identification. There's also a link to it on the front page in the right-side column. (It may need some rewriting but don't worry about that.)