Over the years, I have owned two Amflite Sunfish clones. They were made by AMF, and I know the underbody is virtually identical to the Sunfish, but the deck is a one-piece affair unlike the Sunfish with the the separate deck, cockpit tub and coaming components. With the rounded over hull/deck joints, it is the prototype for the modern Sunfish design and a dead ringer for the Minifish. All the othe parts (spars, rudder/tillers, daggerboards etc.) are stock AMF parts. The rudders were the Sunfish pre-1972 design with the old style bronze hardware, but one I owned (see photos) had the newer design rudder with the spring loaded kick-up design features (maybe a retrofit?)

Does anybody know for sure, why AMF came out with this design while making the true Sunfish at the same time? What is the timeline for production? Are these the boats that were sold through Sears Roebuck for a time? I seem to recall that AMF wanted to change the Sunfish design but the Class said no (and AMF built them anyway but sold them as the Amflite.)

Where are they now –

Where are they now – Index of AMF Sailboats ? AMF was once one of the largest recreational equipment companies in the United States. In late 1985 AMF went belly up in a hostile takeover by Minstar, Inc. and their assets disbursed. Today only the bowling equipment division still exists under...
forums.sailboatowners.com

Sears was known for cosmetic changes to successful designs, often re-drawn to their fussy specifications.

Hands tools, for example, were taken from S-K Wayne, and marketed along with their huge line of Craftman-branded tools.

Where Western-Auto stores can be found, the brand is still around.

Bought by Stanley/Black&Decker from Sears Holdings for nearly 1 Billion dollars, Craftsman tools are now sold elsewhere, including Lowe's. They could be made in China, just like Snap-On tools are today.

Shame on Craftsman, whole web/splash page about parts of the tool
sets made in USA. Much of the sets now made in China. Court rules
it's not deceptive advertising. Made in the USA, Manufactured in China!

Sears may have to Sunfish manufacture they had to hit a specific price
point for each run of boats. Also reduce number of replacement parts
they had to add to inventory. Huge sales corporations dictate to the
vendors what the profit margins will be, sometime bankrupting the
vendor so the Chinese can move in and buy the company. The
sales corporation then strikes a deal with the new owner.
C

Hi Alan, wasn’t the AMFlite also sold as the Windflite? Can’t recall which came first. I think this was the classic marketing plan of offering similar products at different prices to get more sales. For instance, back in the 60s Chevy sold the Biscayne, Bel Aire, Impala and Caprice. All the same car but with features ranging from plain to fancy. Same thing today with various models of the Jetta or Accord.

They were selling tons of Sunfish, but probably figured a less expensive version would appeal to people who could do without the name brand, cockpit cubby, access to racing, latest rudder fittings, etc. It might also have given them access to retailers (like Sears) do to the lower price as well.

Back until 1984 or so the class was totally controlled by the manufacturer. They changed sail designs (shape and cut, not color schemes) a few times whether the sailors wanted it or not, switched to the hated Shadow board, etc. So if they had felt strongly about changing the hull they would have just done it.

In fact, the class was shocked when Pearson (or maybe it was predecessor Minstar) launched the current hull/deck. I was at a regatta at Barrington in 1989 when they showed up with it to show it off. The class had no idea it was coming.

Anyway, those are my suppositions!

Very interesting. I am sure these two piece AMFlite or Windflite hulls were a lot easier (and cheaper) to build and assemble, but the rolled over deck design was an improvement over the old design with the aluminum trim so I guess it all came out better in the end. Amen on the Shadow board. It works OK on a Minifish but not on the larger Sunfish; just too small. The current plastic board is superior to any of the wood designs.

I've heard stories that all the Sunfish knockoffs that were two piece boats were selling for less money than the four piece Sunfish. So they came out with this version for about $100 less money than the Sunfish. Did not catch on though. The molds (two sets) were available for purchase a few years back in CT. Don''t know what happened to the molds since as I have been unable to reach the seller since I looked at the molds. The molds were at one point in the late 80's or early 90's used to make a boat called the Orca. One complete boat was built and two were in parts still in the molds. The sails can be found on eBay. Te molds included a rudder mold and a Barrington style daggerboard mold. Most likely they have ended up in a land fill.
C

How did you get back in after flipping? Looks like no rails or hiking strap to grab on to. Picture 521 For Windflite By Alcort - ShortyPen Sailboat Guide

Good point. One of the advantage of the curreent Sunfish cockpit dersign is having the underside of the deck to grab if you are trying to get back in the boat after a capsize or getting a foot hold if you miss the hiking strap after a tack. For these one piece deck configurations, you are dependent on using the hiking strap. The same goes for the Laser but the Laser does have grab rails just under deck level and a hiking strap. If I sailed an AMFlite or an Windflite, I think I would add Laser style grab rails for safety reasons.

I see what Chris means. But it looks like there was a strap that is torn in the back and missing altogether in the front. Dangerous to go sailing that way. Looks like there is a bailer in the "usual spot." 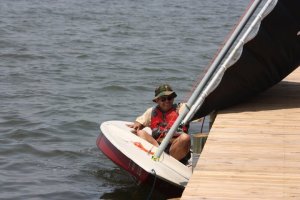 It had rails in the cockpit. I thought they were hiking rails, never thought about their use in capsize recovery. 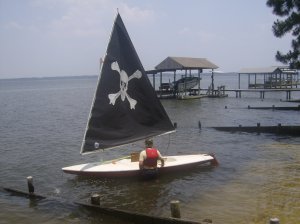 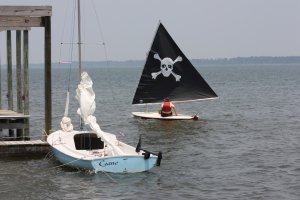