Question for the engineering types—stress on a block

Hi,
I am replacing the hook for the mainsheet on my Minifish with a ratcheting block.
To avoid cutting a port in the deck, I will install a strap eye in approximately the same location as the hook and screw it through to the backing block just as the hook was installed.
My question is, would it be stronger/more resistant to pulling out if I install the strap eye horizontally or vertically?
See picture for my rough mock-up

Here is a picture of my recently installed block. I used the existing strap eye. So, my guess is that this is the orientation you should use. 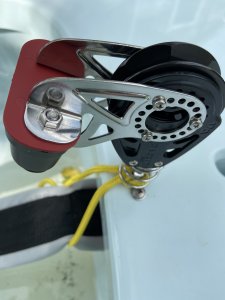 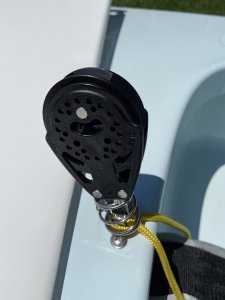 Here is a “before” picture
T

It looks like you already have the block. So, I think you should install it and see if you like it.

Short answer: the vertical installment is stronger. The pull is then always more or less along the axis of the fitting and the fastenings.

Longer answer: installing a mainsheet block on a vertical plane (that's the forward wall of the cockpit, right?) makes no sense, especially with the standup spring holding the block 90° the "wrong" way. If that's the only possible place, then you'd want to use some kind of bracket between the eyestrap and the boat.

My intent was to install the block on the horizontal plane on the deck like my Sunfish but I am trying to avoid cutting and inspection port to do so. I think TheGoldenDuck's installation is on a Sunfish, not a Minifish.

There is no backing block under the deck on a Minifish. The only one is about two inches down on the inside of the cockpit (vertical) where the original hook is installed.
I would have to cut a port to install a backer or fender washers under the deck to mount it horizontally, as there is no exposed lip like there is on the Sunfish.

I have the inspection port, but it looks so clean without it and the hull is tight and dry, I am trying to avoid cutting such a nice hull.

As I was about to cut the port, I looked at it and thought, maybe I can just mount it on the vertical and it would work.

See the pictures below of the angles—slack and under tension. (I have it just temporally held in with one screw as I experiment.) 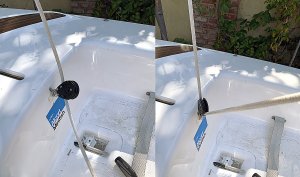 on the lip I have seen a block mounted vertically of a Sunfish before (see the attached photo of the yellow boat) so thought I may work out.

Thanks for the input, I may just go with the port in the end.

Here is a photo that Thad (my2fish) graciously took of how he did it. He installed a port.
-Andrew 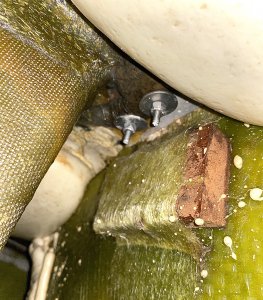 Hi Amfab. Have you thought about a stainless “L” bracket, or even a 90 degree piece of fiberglass? Wits that option, you could screw the long part if the L to the backing block, and through bolt the eye to the short end of the L. Obviously you will want to round the corners so that no one gouges themselves.

OK, I found some stainless tubing in my shop and made this: 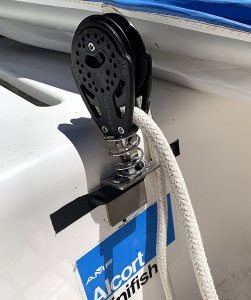 I think I can use the existing two holes for the stock "hook" and drill a third below it to reinforce and still hit the backing block. I will center old holes on the vertical side. I will mess around with it as it gets cooler today.

I will have to round the crap out of this, it just looks like something I will cut myself on.

Oh well, there are no aluminum rivets around the cockpit to get cut on like the Sunfish. I need SOMETHING to scrape and cut me, otherwise its not a true sailing experience.

That looks dangerous. I’d use an eye for now- attached horizontally. If that doesn’t work you could try this approach , but I’d glue a section of tennis ball on to cover the metal lip.
L

Andrew, that's almost exactly what I thought! Just "round the crap" out of it as you say, and you're all set.

OK, I rounded the edge that faces into he cockpit.
I had purchased a plastic spring cup and vinyl boot for the spring from Intensity Sails
With a few little modifications I got it so it falls over the rounded edge of the bracket. 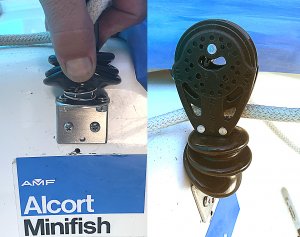 This should work out pretty well. I just have to drill and put in the extra screw to finish it off. I am using the same holes and same size screws the original hook used. I think the one extra screw will offset the added leverage the bracket creates.

Thanks everyone for the ideas—and the warnings. Beldar was thinking like I was—"...looks dangerous." With the thick vinyl boot I think I am good though. I'm taking her down to Baja next week for a few days to try her out, so I will soon know.