I just bought a Sunfish after 35 years since playing with one when I was 15. Thank you guys for being here, old posts have already answered a lot of questions for me.
I have the boat down in Mexico at a friends house but I plan to going down there several times a year.
Its a mid-80s that is in pretty good shape. After spending several days sailing it in the gulf I am going down again this weekend and putting a harken block on it in place of the hook—to help with the fatigue.

My question is, I have a racing daggerboard with the foam/metal rods core. As were were leaving the beach my girlfriend stuck the tip of the daggerboard into the slot and we got hit by a small wave which knocked it out of her hand. This caused the weight of the board to lever against the two inches inserted in the slot and brake the tip off.

For this trip, I formed and welded up a stainless steel tip for it and glued it on using some polyurethane automotive panel adhesive, it should be good for now. 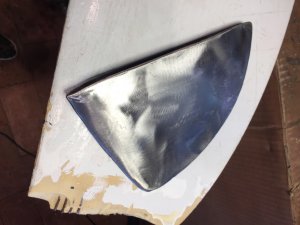 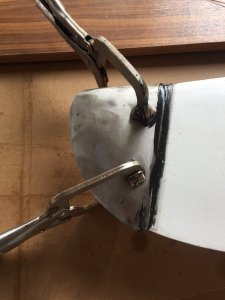 My use is recreational and its a few hundred miles south of the border on the gulf side so there is nowhere to get hardware for hours. So I am looking more for durability not so much racing. I have seen on eBay some mahogany reproductions of the racing daggerboard size/shape. I like how fast the boat is and I like how stable it is with the big daggerboard.
Would the mahogany one be more durable? Maybe my stainless tipped bionic-daggerboard will last.
here is the one I am looking at buying:

The foam ones are a bit fragile, and the fiberglass ones LP provides now can chip, so wood seems like a good solution. I think your bionic repair may last though and work well.

IMO, the further one is from civilization, the closer to factory specs one should stay. A bigger board is going to put a bigger stress on the daggerboard trunk than the factory one. IOW, you could have two problems instead of one, should another "misadventure" strike.

But I'll defer to member Mixmkr, who has built a nice bigger board recently, then gone back to factory (plastic).

The urethane 3M Autobody panel adhesive is pretty amazing stuff. I will see how it holds up. Maybe it is a long-term solution. Its a not totally smooth because it puts a small horizontal ridge across the board at the top of the metal but I definitely will not be getting any chips on the lower four inches of the board.

Thank you for the input. 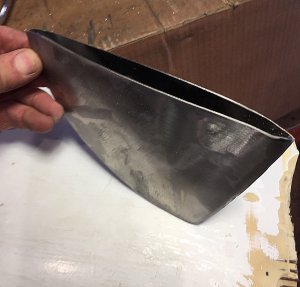 • I'd held my breath several times, trying to pull my catamaran's mast out of the mud in Miami's cloudy Biscayne Bay. Spent too many minutes trying to right it—never a thought as to a shark danger.

• In crystal-clear Gulf Stream waters, I spent 20 minutes in 600-feet of water cutting away a line that had tangled in our 18-HP Evinrude's propeller. I DID think of a shark danger,

but I had a look-out stationed "on the watch".

. The shark was drawn by the scent of my early-morning 35-pound King Mackerel catch off the Florida Keys.

The catch started with, "toss me a ballyhoo". We saw him approaching slowly at the surface after each big swell passed under us. My job was at the motor to chase after the shark, while my buddy carefully reeled him in. After about 40 minutes, we got him alongside just as the line parted! He sank slowly, and there was nothing we could do.

He was nearly as long as our 18-foot boat! Checking the end of the line showed a gentle 8-inch taper. We theorized that the line had been "sanded" into nothingness by rubbing against the shark's skin.

As he was exhausted, but still alive , what we were supposed to do with such a huge fish during a five-mile return trip, I don't know.

Ghost Rider said:
Show the 2-ton Great White cruising under the boat, LOL. L&VW, I was onto ya about that "female fin" business, but this is a family forum, LOL.

This one, off South Africa? 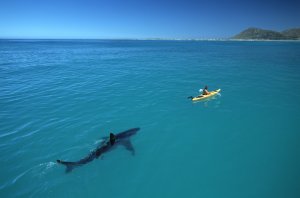 Update: Stainless tip protector is working well. It fixed the broken tip and I notice no performance loss. It also helps if it drags on some gravel or sand if I am slow to pull up the board coming into the beach. After all the shark talk,I painted the stainless tip white to avoid the shiny stainless end looking like a fish.
Gratuitous beach Pict: 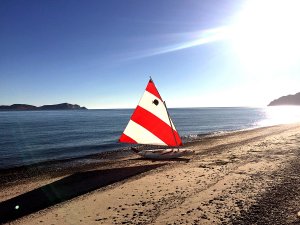