Need Your Opinion on Hole in Mast Options

I just discovered a 3/8" wide x 3/4" long hole in the bottom of my mast, 1 inch from the bottom. This hole was originally two smaller holes that upon stress testing with a screwdriver revealed a small crack in-between. I removed the cracked area and the hole opened up. What do you advise as the best option for addressing this - as the remainder of the mast is in good shape and seemingly serviceable.

1) Flip end caps, effectively placing the hole on the top of the mast - 1 inch from the halyard cap. Fill hole with JBWeld or equivalent with backing plate.

2) Saw off bottom 2" of mast containing the hole, effectively reducing the height by 2". Most of the moderate corrosion is confined to the first 2" of the bottom of the mast.

I vote for number 3, sealing with JB or other epoxy and smoothed very well to avoid the possibility of the edges chewing away at part of the mast step.
M

If you go with the third option, the sleeve kit, i would also spring for the few extra bucks and get Intesity's Sunfish/Laser mast chafe kit and cover the repair, after smoothing it carefully as suggested.

This is one of those situations where you might not want to spend more on repair than the result would be worth. The challenge with the sleeve kit is that you can spend the $49-plus for the kit and still have a repaired mast. You might find a first rate used mast, maybe from one of the regulars here, in that range.

If you aren't 'class sanctioned' racing (except at the highest levels, nobody would care a bit) and are hanging on to the boat for awhile, I might be tempted to switch ends and if the repair looked like work, take the couple of inches off. You won't be giving up anything in utility or performance. Meanwhile I'd save the dollars and if it really bothered me (it wouldn't) I'd keep an eye out for a 'new' mast at a good price.

If you also had a Minifish....never mind.
S

If you are anywhere near Rhode Island I have used masts starting at $50 and new ones for $125. Then you could cut 1 foot off your mast and sell it as a Minifish mast for $75. That would net you $50 on my new mast. Cheaper than the repair with sleeve. cjo1023 at yahoo-dot-com.

Staff member
I would go with option 4: contact sailcraftri.
The reasoning is that your mast may well be weak in other spots as well. And you do want to be safe when the wind pipes up.

If you do not buy a replacement, which is the best choice, I'd flip it end for end. If it is that corroded at the bottom, it is probably corroded in the gooseneck area and it is going to snap at some point. The downside of end for ending it is the anodization is probably worn away where the gooseneck has rubbed it and it will get black on your sail on port tack, but it is better than having it snap. Just fill the hole with marine tex - JB Weld might be fine - i have never used it.

When my uncorroded mast broke off in a storm, I immediately ordered a new mast. But while waiting, I went to Meineke Muffler, and asked if they had a discarded—but new—straight pipe that would fit inside to restore the mast.

It's stronger now, a perfect fit inside, there was no charge, and has given me an "emergency-spare" mast—if there's a "next time".

I shoulda asked for stainless steel!

Finally back at my newest Sunfish (1976), I inspected the mast for corrosion—and found one perforation.

For the photo, I stuck a pine needle into the perforation—then drilled it out to 1/8-inch. The 1/8-inch hole fits the snorkel on a WD-40™ can, and then gave the mast interior a 5-second blast. Gorilla™ tape sealed the hole for next time. 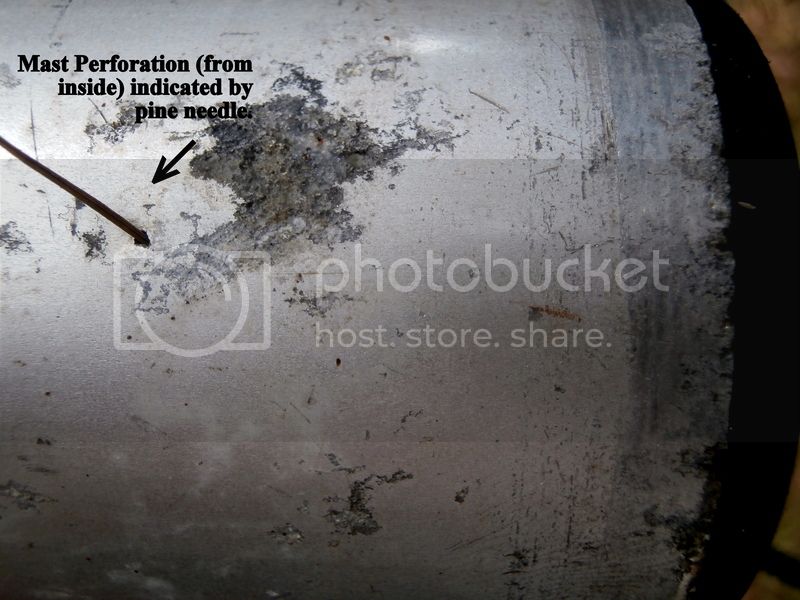 Does anyone put anything on the mast at the point where the gooseneck rubs, to prevent wear?

From what I've just read, Fluid Film® might be the best application at the gooseneck; however, being wax-based, it might permanently stain a colored sail. WD-40®, being handy, I've found has to be applied every few days.

I agree that WD-40® isn't suitable for every application. For fighting corrosion or loosening corroded fasteners, nearly every other product that competes with WD-40® works better than WD-40®! (Except maybe, in killing wasps: WD-40 Wasps - Bing video ).

Fluid Film® certainly got rave reviews at Amazon, but very few reviews mention use around corrosive environments or marine use. The reviews suggest that it—being lanolin/wax based—is not as fluid as WD-40®. (The manufacturer says it "migrates", which is not the same as the "capillary action" found in CRC 3-36®). Perhaps spraying Fluid Film® inside of a new mast, or removing both caps on an older mast would be the best application method.
Fluid Film® | Corrosion Preventative, Lubricant and Rust Inhibitor

For a product with excellent "creep" characteristics, I'd previously used CRC 3-36® (similar to WD-40®), as a corrosion inhibitor, which seems like a better application for the inside of Sunfish spars and masts than anything else.
CRC 3-36 as a thinner, less waxy/tacky alternative to Fluid Film
Last edited: Nov 12, 2015

Nene said:
Does anyone put anything on the mast at the point where the gooseneck rubs, to prevent wear?
Click to expand...

I suppose that one can tape the contact area. Whatever, it's important to rinse with clean water after a sail.

Staff member
Gaff tape would work well on the mast. I use a piece on the boom on some boats, or electrical tape.
You must log in or register to reply here.
Share:
Twitter Reddit Email Link
Top