Hey everyone,
I haven't posted much on here before, but I wanted to share some pictures and detail about my recently restored wooden sunfish. I got lucky enough to find a wooden sunfish when I was 14, long before I knew how rare or cool they really were. I found it at the Chesapeake Bay Maritime Museum at their 2013 Charity Boat Auction that they have every Labor Day weekend. My sunfish was one of their boats with a set price- $275. What's great about being a kid that shows interest in sailing is that the older guys are always willing to cut you a break since they want you to get into it. The guys that ran the auction gave me the boat for $140. My dad and I went back two days later, since we had no way of taking it home with us the date of purchase. Of course, we didn't have a trailer to bring to grab it. Instead, my dad and I slid it into the back of our Suburban and made the 3 hour drive home with the stern hanging out of the car, but we made it back with the boat in one piece. After checking the serial number, we determined it is a 1964 sunfish, so it was almost definitely a kit. Attached is a picture from a couple years back, when my dad and I decided it would be much easier to just buy a trailer, especially since the one we were looking at came with a fiberglass sunfish!!! I'll be posting more this week. I am just about wrapped up with my restoration, I just need to collect all the pictures and parts and get them uploaded. Let me know what you guys think! 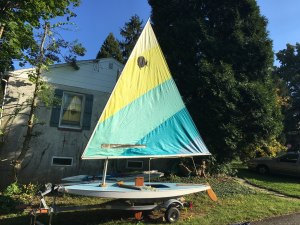 Staff member
Wow she looks great! Great story, and how's the sister boat doing? Love the sail, did she come with the aluminum spars? Seems most of the wooden boats were getting them around that time.

She definitely has the mid 60s lines like our 1963. 1964 might be the year they added metal trim to the cockpit edge.

Why indicators lead us to think "she was most definitely a kit?"

Has she sailed yet?
M

The fiberglass sunfish sails like new! I'm jealous of her cam cleat, I want to put one on the woody but I want to sail it like the day it was built. My dad and I used to sail the woody together when I was younger and couldn't handle it myself. I plan on taking it out this week for the first time alone. One thing we have had a problem with is the rudder popping out of the rudder assembly. Not matter how much we tightened the wingnut and screw it always seems to pop out. We've resorted to tieing a zip tie around the rudder assembly to hold it to the boat in the case of a pop out. The aluminum spars and sail came with the wooden sunfish. I don't know enough about the sails to know if it is original or not. Maybe somebody on here would??? And I'm just assuming she's a kit. I know wooden sunfish production was discontinued in the early 60s. Someday I would like to open her up and see if it was a kit, but I don't think I'm ready for that just yet. It's been a couple years since she sailed last. The rubrail began falling off the last time my dad and I were out probably the summer of 2016 and I never got around to fixing it. Finally I decided to replace the rubrail altogether, which turned out to be challenging since the screw holding them in kept stripping. I couldn't get a single one to budge, so I put a metal disk cutter on my dremel and cut the heads off each screw. After that I was able to pull the rubrail off and get the remains of each screw out of the holes. Thanks for the kind words and I hope you enjoy my coming posts!

Staff member
We decided to keep our 1964 without a cleat or hook. We put a ratchet block on our 1953 but that might come off. They are fun to sail, we made sure our sheet was long enough so that if it slipped out of our hand, the sail could feather all the way forward and the boat would stop sailing.

As for the rudder, it could be that the bottom bevel tip of the vertical plate is worn or the bevel cup on the latch plate is worn. Or a little of both. Check them out.

Keep an eye on your halyard block too. Some were made with chrome plated brass and they can pull out under heavy halyard loads. And if you trailer long distances some folks tape them so the nuts don't vibrate loose, similar note for the rudder assembly latch plate.

We really like how the wood boats sail, they are different.

Do they have names?

HI Mark, regarding the rudder popping out, if it's the glass boat you are talking about, and it is an old style rudder, it sound like the nylon tube that goes around the carriage bolt is missing. That tube fits into the slot in the transom of the boat and prevents the rudder from moving side to side. If you search on this forum in the upper right using "rudder tube" as the parameters you will find out everything you need to know.

Here's a bit of my post on that thread, "
New to forums, a few questions...
Hello, As Allan mentioned, you will need a rudder tube that goes over the carriage bolt and prevents side to side play. If you don't have that tube, the rudder is likely to pop up. The tube is 1/2" OD x 1/4" ID x 5 1/4"."

There are pictures on that thread as well.

Hey Charlie,
I'll take a look at the rudder hardware and figure out the problem. I haven't thought of a good name for the wooden one just yet. I've been looking at popular songs and names from '64 but I'm not sold on anything just yet. I want to find a name with a little meaning to it, and I haven't quite found what I'm looking for. I'll take a look at the rudder assembly, but I'm not sure if I'll be able to fix it. I read in Will White's The Sunfish Book that popping out was a common problem with the old style rudder assemblies. Along with it popping out on my woody I've also had it happen on my '68 Sailfish. I couldn't get it back in place on the water so I sailed back with only the rudder pin holding it in. I'll definitely take a look at that halyard block. Along with that I'm going to epoxy the wooden mast step because it seems loose and I don't want that shooting up the mast on the water hahaha.

Wjejr,
I was talking about the wooden sunfish. The glass one is an 80's fish with the new rudder assembly. Thanks for the info though! I'm sure the same applies to my glass Sailfish so I'll have to look into it!

Here's some before and after pictures of me painting the underside of the woody. I used TotalBoat WetEdge Topside Paint from Jamestown Distributors. They have a great reputation for customer service. I called on several occasions and they were able to offer me advice on my restoration. Looking back now I realize I should have scraped all of the paint off to get down to the wood, but the bottom turned out ok. Some of the cracks are still visible but I may have to redo that in the coming years. The top turned out much better. 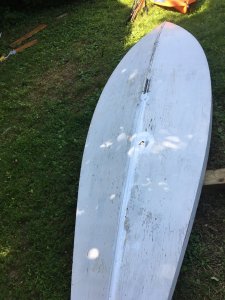 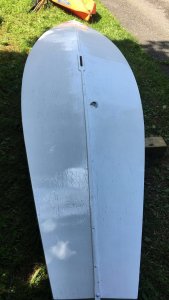 The deck proved to be much harder and more difficult than I had expected it to be. I tried getting the loose chips of paint off, but realized I would just have to scrape all the paint off. The hot Pennsylvania sun did half the work for me. Scraping while the sun beat down every afternoon made the paint come off in strips like wallpaper. For anything that was left, I used a heatgun to get the paint loose and scraped it off. It took about a week but it was well worth it. Attached are before, after scraping, and the final product. Hopefully it'll be clear with are which hahaha. Final note, I would have taken the mast step off but I couldn't get any of the nails. They felt like they were epoxied in place so I just decided to paint around it instead. I was hoping the color would be closer to the original, but I couldn't get any hardware stores to mix the paint I was using....something about the type of paint and its ingredients. I tinted it myself by adding navy blue paint to white paint (all TotalBoat Wet Edge Topside Paint from Jamestown Distributors). Anyway, not the best restoration, and hopefully I'll get to do a better job later in life, but I don't think its too bad for a 20 year old ameteur!

Staff member
Looks great! When that coat wears a bit you can sand, fair and add another topcoat.

The mast collar is held on by 4 large screws, #12 bronze. They are countersunk and plugged. Look close and you'll see the 4 wood plugs. No need to remove them really, just sand and paint and varnish carefully.

PS if you'd like a 15% discount for TotalBoat, send us a private message and we'll pass along our Ambassador discount code.
M

I didn’t bother trying to unscrew them since they felt like they were epoxied in place. Plus there are a few extra screws. Thanks for the tip about the discount in TotalBoat!!! I’ll definitely message you next time I need something. Till then, I hope you enjoyed my little restoration!!!