I've noticed some booming on waves, and now i'm seeing some little foam pieces inside the hull.
So I took these pictures thru the cockpit inspection ports.

Am I correct in thinking that the left side is missing the expanding foam completely (at the bottom)? And the right only has it going halfway back?

If so, has anyone used polyurethane glue (like gorilla glue) to try to fix this? 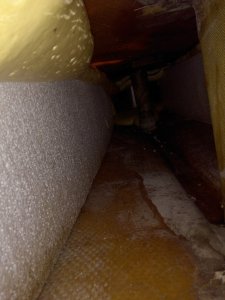 I've been disappointed in Gorilla Glue.

I'd tilt the hull, and instead, spray in some Great Stuff—one product (of many) constituted for waterproof applications. Two-part foam is mentioned here glowingly, although I've never used it. Wear gloves.

Through my huge "Ultimate Inspection Port", I can see that flexing of the hull is ample.

"Sunfish engineers" have suggested bonding stringers to the bottom. Not a bad idea.

Thanks, Light&Variable. It seems like polyurethane type glues would be perfect for this application, but those in this group don't seem to favor it.

when you gonna install that mini-fridge?

I did it with 2-part expanding foam. details here: foam block reset 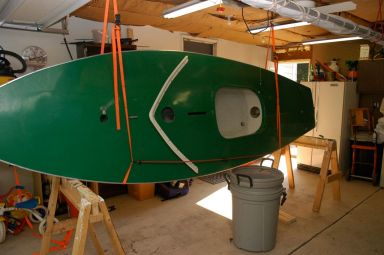 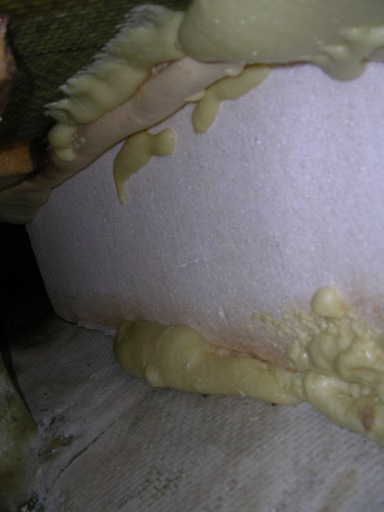 I thought the spray can Great Stuff will absorb water? if not, that'd certainly be easier than mixing it and pouring it like I did.

Staff member
I would leave this alone, assuming the block is in its proper place and 'connected' to deck and bottom; perhaps the 'builder' used a minimum amount of expanding foam rather than an excess. A bit drunk at the time; it was Friday...

When I started sailing my old beater Sunfish "The Betty" shortly after I bought her, I immediately started to notice what seemed to be too much flexing in sections of the hull. And the "booming" as you put it when going over waves. Taking a look inside revealed almost exactly what I'm seeing in your photos; missing expanding foam in 2 long sections on both the port and starboard sides. I didn't do anything about it for a while.

It wasn't until I started to notice small, light colored pieces of foam appearing inside the hull (the coarse roving glass "sandpapering" the foam support blocks down) that I realized I needed to do something. So I researched expanding 2 part foam.

The best thing I can recommend is to do several practice pours outside of the boat before doing the real thing. That's because you've got to mix the two parts until it starts to change color then immediately do your pour. Otherwise you'll have, shall we say, an inconvenient expanding experience. So what I did was fashion a right angle with two old scraps of plywood screwed together and did some practice pours.

I then figured out how far I could reach inside the hull just with my arm and then fashioned a stick attached to my plastic mixing bucket to reach the rest of the way. By doing a couple of practice pours on my right angle of plywood testing area, when the time came for the real thing it worked out pretty good. Below are a couple of photos. One just like yours with no foam then another with the foam in place. You can see how I did 2 separate pours. This was mainly because after practicing, the likelihood of screwing up one long pour seemed high. So I just did 2 separate ones.

The foam I used was, "AeroMarine Polyurethane Foam". When that stuff sets up it's hard as a rock and has truly impressive adhesion qualities. Ie, you can't pull it off of what it's attached to.

The result? No more flexing of the hull. Oh ya... and here's a video of some left over foam expanding in real time then sped up. 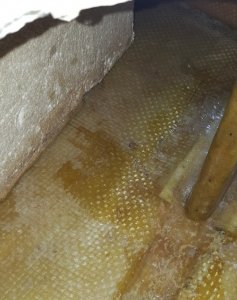 Wavedancer: I'd normally ignore it, but I'm gonna use the sunfish for a bit of casual club racing. Which is why i want to get rid of the flex.

andyatos: I like your process and and especially doing the practice pours. Things never work quite the way you think. I'm gonna follow it, its worth it to have a solid boat.

tag said:
I thought the spray can Great Stuff will absorb water? if not, that'd certainly be easier than mixing it and pouring it like I did.
Click to expand...

Great Stuff ™ has maybe eight different varieties of their product. I saw them lined up in a Mom & Pop hardware store, and probably should have bought a couple of cans back then, but they were in the $12-$14 range. As I recall, at least two products were provided for use in backyard-arranged fountains. Just located one of them: 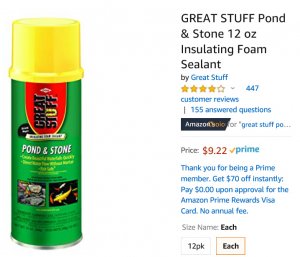 Check to see if the blocks have loosened. Part of the repair may include jamming spacers between the blocks to align them closer to the hull's sides. I've got one homemade batten pushing my two forward blocks away from the center, but may need three or more to get them back where the factory intended them to be. A little more rough-water sailing should flex them back into place.

This is the homemade batten, with "custom" ends: Now that I've discovered a more reasonable price (and delivery)

I should get started with this fix!

Great Stuff tempted me, but from my research it was not the way to go. I was nervous about the 2-part expanding foam, as my prep photos show, but with a 25 second working time I really didn't want to screw up! It worked really well and I reattached both blocks without blowing the lid off my boat. Tilt the boat, use gravity, don't pour too much- Andy's excellent video (love the frog) is an example of a picture being worth a thousand words!
Here's what I used:

"Great Stuff ™ has maybe eight different varieties of their product."

I noticed Pond & Stone has the magic words: Breeze Bender said:
Tilt the boat, use gravity, don't pour too much
Click to expand...

That was a nice pour Breeze Bender. Very uniform.

Staff member
Am I correct in thinking that the left side is missing the expanding foam completely (at the bottom)? And the right only has it going halfway back? Yes.

Try the Gorilla Glue. Take pictures. I like the wedge idea too, we used some paint sticks in a similar fashion to hold the blocks in place while we poured and while the foam dried.

Great Stuff will seal but it will also absorb water. I'd be okay using it to tack the blocks down in a few spots or a few half dollar size blobs under the cockpit. It is a "water resistant" sealant and is not intended for use as an adhesive so who knows if it will releases over time?.

2 part marine grade foam is the way to go, but it is expensive and hard to work with. It has tenacious adhesive qualities and is closed cell foam that needs to be immersed for a long time to absorb water.

Breeze Bender said:
Great Stuff tempted me, but from my research it was not the way to go. I was nervous about the 2-part expanding foam, as my prep photos show, but with a 25 second working time I really didn't want to screw up! It worked really well and I reattached both blocks without blowing the lid off my boat. Tilt the boat, use gravity, don't pour too much- Andy's excellent video (love the frog) is an example of a picture being worth a thousand words!
Here's what I used:
Click to expand...

Your third photo shows the "terminal" end of a Styrofoam block. 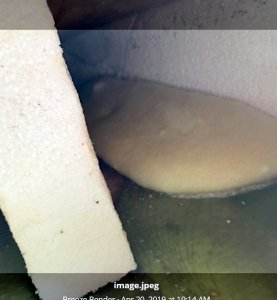 Both of those blocks on my ex-racer '76 Sunfish extend aft—beyond the splash guard. Or, to put it another way, how did you get that image?

BTW:
If a Great Stuff brochure says it's safe for fish, I think we're good to go.

I already ordered the 2-part from USBoats for $54.99 inc. shipping.
Damn expensive, but what I realized is that I can't reach too far down in the hull and will have to build a ladle to pour along the blocks.

I'm gonna practice with a cardboard box with a hole and some paint or dairy cream to get the ladle technique before I do anything with the real foam.


It appears from what I've read that the foam can degrade after a number of decades and retain water. This may explain why some sunfishes are heavy and cannot get dried out. Only way to fix them would be to pop the top and reset the blocks with new foam.

Gregory Matous said:
Only way to fix them would be to pop the top and reset the blocks with new foam.
Click to expand...

The simpler fix is to dry the boat out, then fix the leaks so there is no water present to soak into the foam.

I'm happy to say that we're going back to Wisconsin this summer. My knowledge about sailing and the Sunfish has increased vastly since my visit last summer. While I won't have time to do too much, I will be able to evaluate the old Fish. The boat has the diagonal stripe on the aft deck so it's at least a '73 but no one has done almost anything to it since my Dad and I picked it up in '76. An operation as described above may be in order at some point. The boat didn't seem overly heavy last summer but I'll get a better feel for it this time. Very much looking forward to sailing it now that I have more experience with my new boat out here in California.

So I poured the foam, seemed to turn out ok.
Couple of tips for others..

1) I was able to pour the bottom half by just getting the trailer on a slope and tilting it. (I had 2 ports on the front of the cockpit). The liquid just pours down in a stream. Not too steep or it will pool at the bow. You can always add more ..

2) Small pours are better.. You can add more if you wish. I may add more.

3) I actually had more pour time than I thought. After a 30 second mix, I had a good 30 seconds or so to pour. No need to rush like i thought.


4) I also found a flexing spot on the hull underneath one side of the cockpit. I fixed it by reaching back and stuffing in a piece of coroplast covered in 3M 5200. The coroplast was stuffed between the floor of the cockpit and the hull.


5) While I was messing with 5200, I also built up the emitter on the plastic bailer which was getting ground down. We'll see how it holds up.

Should ride like a cadillac now. Its a '72 so I figure it will be good for another 40 years 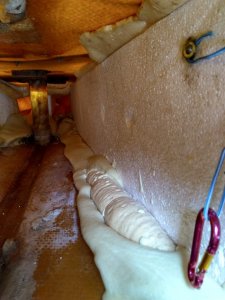 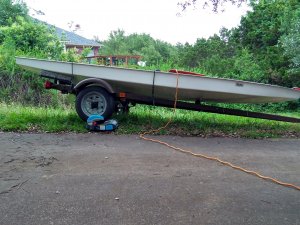 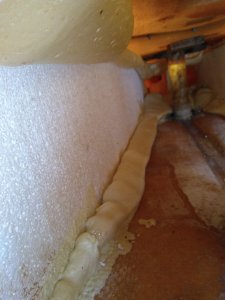 I have some flexing on either side of my splash guard and am wondering about putting in an inspection port to check out the interior. I'm curious to see what it looks like anyway. The tilt is a great solution!
S

Norcalsail- I would not put a port in unless the boat is leaking. The boat is fiberglass so it will flex. There are lots of pictures of the boats under construction at the factory to see how they look.
You must log in or register to reply here.
Share:
Facebook Twitter Reddit Pinterest WhatsApp Email Link
Top