I was just given a 1976 Minifish. I need to replace the bridle but am struggling. Rather then hooks to attach the bridle there are holes on each side of the boat. Further, there is a piece of rope that was used for the bridle simply knitted into the holes. I would like some guidance relative to replacing the bridle, bridle length and how to properly attach the bridle to the boom. Thanks in advance for any help.
T

An alternate method (which I prefer) is to loop ends of the bridle all the way around each gunwale, and tie each end with a bowline. This leaves a loop at each end, which I use to clip on a bungee cord which can be used as a "tiller tamer" to hold the tiller in place while I launch the boat or take a quick break while sailing.

The mainsheet goes through pulleys on the boom. The end of the mainsheet furthest from the mast should have a clip which you can clip around the bridle. The clip should slide freely on the bridle, so each time you tack it will slide to the opposite end of the bridle.

If anything isn't clear, search the web for pictures e.g. "rigging diagram for minifish."

The bridle is supposed to be 31 inches long (exclusive of the knots). It actually works better than the Sunfish “wire” IMHO, as it allows for better positioning of the sail (I think. That opinion is simply based on personal observation and WAG engineering protocols).

Thank you for the replies to my question. I am going to work on the situation this afternoon. Another question related to that is how to attach the bridle to the mainsail. I tried looking this up in the rigging diagram but it just wasn’t clear (at least my novice interpretation of it). Could y’all please help me?

To attach the mainsheet to the Minifish bridle rope, you can just use a bowline knot.

Or to make it quick and easy, add a snap clip to the mainsheet.

Here is another question ... I see on the rigging diagrams that sometimes there is a block near the cockpit to secure the mainsail line. In my little boat there is merely a mechanism to slip the line through. Not a block and not very secure. Should I install a block on the top of the boat for the line?

I installed the following on our Minifish. You do end up having to install an inspection port on the deck to get fasteners below the mainsheet block eyestrap. 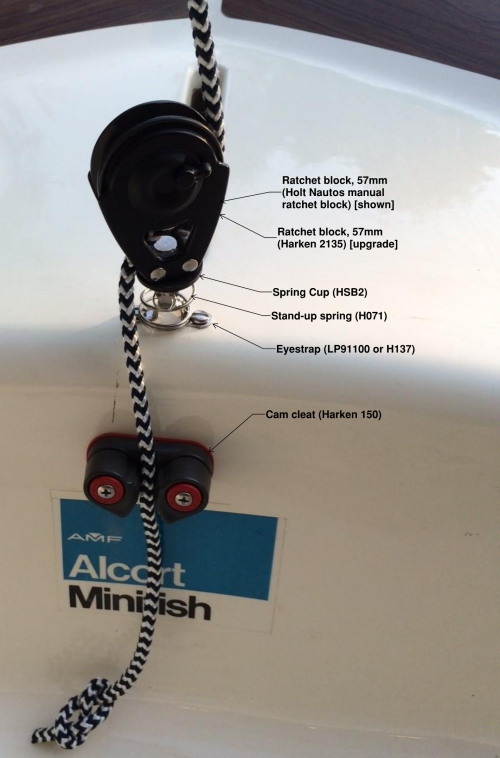 Staff member
I suggest to see if you like your current set up. If not, tag's method has a lot of merit.
But remember, you need to be able to sheet out quickly, or you will go swimming...

You guys have been terrific. You have no idea how grateful I am for your advice. Thank you!!!

tag said:
To attach the mainsheet to the Minifish bridle rope, you can just use a bowline knot.

Or to make it quick and easy, add a snap clip to the mainsheet.

Or you can attach the mainsheet to time bridle using a bowline knot. I prefer that to the metal clip as the metal clip tends to scratch up the gelcoat on the boat when the mainsheet is loose.
You must log in or register to reply here.
Share:
Facebook Twitter Reddit Pinterest WhatsApp Email Link
Top