Is a mainsheet ratchet block upgrade (over the old manual ratchet red Ronstan with the black sheave, working fine btw) a worthy use of $100, and if so, do people like the Harken, Allen or Ronstan? And is auto ratchet far superior to manual? Just trying to understand expected performance differences. Many thanks.

Staff member
If it's not broken...
C

I’m just guilty of poking around in the “upgrades” section of the retail websites...but curious what’s an upgrade and what really isn’t, based on people’s experience.
L

Chatham Sailor said:
Is a mainsheet ratchet block upgrade (over the old manual ratchet red Ronstan with the black sheave, working fine btw) a worthy use of $100
Click to expand...

In one word, no. The classic "Frederiksen" style Ronstan is good enough. Some even swear by it.

I still see no good reason why any ratchet should not be automatic. Besides already having an otherwise perfectly working manual one

Whoops I misspoke. It’s actually a Nautos block, pictured. Does that change your opinion? 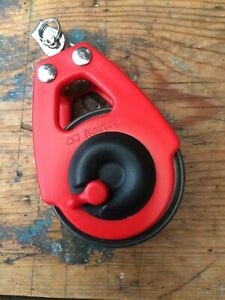 I still use these, they seem to work well and I can slide my hand down the sheet and turn the ratchet on and off without looking at the block, great for start line tactics when you do not want everyone to know you are sheeting in but you need to turn on the ratchet with the minimum fuss whilst keeping your eyes outside the boat. I just found the new Harkens too fiddly, especially with gloves on your hands. 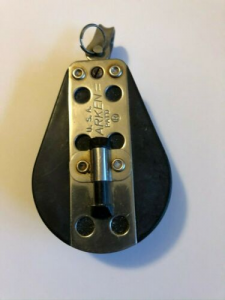 Haha, I like the old school Harken blocks, but I must admit that Ronstan has stepped up their game, back in the day their blocks were $hithouse, LOL.

Harken, well, they were innovators decades ago, don't know what their current design output looks like... where it's made, how it's made, etc. Who knows in this Brave New Third World?

All I can say is this: my best memories & nautical adventures involved Harken blocks (all around), but looking at some of the newer stuff made by other companies, I might consider some of that gear when I sail again, aye?

But the old Harken blocks were reliable, totally bulletproof along with other Harken gear made back in the day... and that big ol' Harken ratchet block I had for my mainsheet always made a cool sound, LOL. It was the sound of true "progress" and "freedom!"

Damn, I miss that sound, and I miss those halcyon days on the water, when life was less complicated and politics weren't so f/u...

Depends on what you want. Haven’t tried one myself, but Nautos is supposed to to be the most ”slippery” ratchet block on the market. Ronstans are the ”grippiest”, while the Harkens are somewhere in between. Whatever feels good and suits your sailing style.

Andy B said:
I can slide my hand down the sheet and turn the ratchet on and off without looking at the block, great for start line tactics when you do not want everyone to know you are sheeting in
Click to expand...

With an automatic ratchet you don’t even have to think about it. And they don’t make much noise either.

Cactus Cowboy said:
that big ol' Harken ratchet block I had for my mainsheet always made a cool sound, LOL. It was the sound of true "progress" and "freedom!"

I can totally relate to that! To me, it was the clicking of the Elvström ”winch block”, with the white sheave and stainless cheeks. They must have been out of production for a long time, but looks like someone in Spain is still selling them for 50 €. Would be great for a vintage look

I'm still using a fredrickson I picked up in 2003. Mine has the option to manually click the ratchet on or off. I have no interest in changing it.
E

My 2cents: The Fredrickson block and Rooster 7mm mainsheet (I usually have lots of wind) are two of the best things I've done for my Laser. Faultless.
H

I've used both the Ronstan and the Harken and both worked well but I found the switch on the Harken slightly easier to use but that is just personal preference.

Either block will serve you well but I would only spend money on a new one if you were unhappy with the performance of your existing block. (I still have an Elvstrom block which works fine!)
B

We are using the Harken 1.5x grip blocks. They're nice. This helps sailors use the 6mm sheet through the upper ranges a bit. They work well. Probably wears out your sheet faster.