Lasers on a lunch break 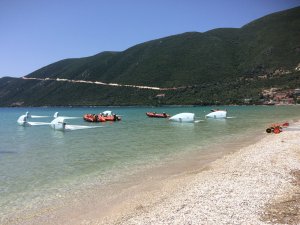 Hmm, not seeing the shots... and I'd like to see 'em, since I spent five years of my youth living in Greece ('68-'73, best years of my youth, hands down, prior to the ugly divorce which tore my family apart). In those days, a large American family could live like royalty on a budget... my pop was a retired submarine commander, big on logistics, so every summer we'd all pile into a VW bus with our camp gear tarped & strapped down on a full roof rack (what folks nowadays would call a Baja rack), and we'd go touring throughout Western Europe. Had a lot of good times in those halcyon days, camping in primo venues for next to nothing, by lakes & rivers with big ol' castles high on the hills above, LOL. Times have changed, of course, and not for the better, ya couldn't tour nowadays the way we did back in the late '60s & early '70s, it just isn't possible on a budget anymore. Meh, same as trucking in the U.S., I'm glad I went when I did and saw all those cool places before the whole globalist f#%ng scumbag agenda ruined everything... never be the same again, I reckon, not without bloody revolution.

Okay, now I'm seeing the shots... just need a few goats and chickens atop the boat rails, maybe some fishermen beatin' octopi in the background, LOL.

Staff member
Greece still is less expensive for the tourist compared to most of Europe.

Two of my brothers live in Europe right now, one in Germany and one in Italy... each married to a local gal. A third brother (my eldest) lived in England for decades, but he passed away a few years ago. I have fond memories of those early days of my youth, we were still one big happy family at the time, you understand. Later, things went south in a big ol' hurry, but I'm grateful for those early memories. It was a separate reality back then, there wasn't anywhere near as much drama as ya see nowadays, drama & grief & strife created by globalist trash and their ilk. In the late '60s & early '70s, Greece was an earthly paradise for foreign nationals dwelling there... now, not so much, and I don't ever wanna return to see how bad it has become, I'd rather keep the good memories alive, aye? It's not good, returning to a place where one knew such happiness, only to discover a modern hellhole... same way it's hard for me to return to places I once happily shared with ex-girlfriends, better to move on and explore new realms with no reminders, yeah? Anyway, here's Crackhead enjoying a cool breeze while lying on a window sill in the Pool Room... despite his well-deserved moniker, this cat has his priorities straight, LOL. 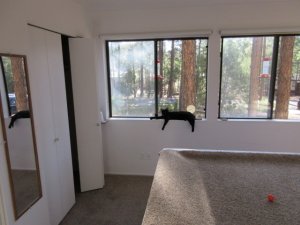 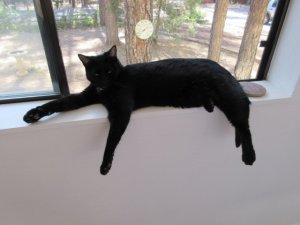 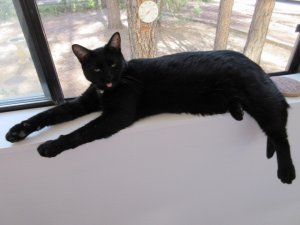 That goofy kitteh, LOL... I call him Crackhead because he gallops around the house every morning at dawn, plus he never stops fidgeting with stuff, just like an actual crackerhead. Here are some shots of yesterday's much-needed rain, you can see how the drought has turned my "lawn" into dirt... I've done my best to keep the bigger stuff alive through timely watering, but the wild roses in the hedgerow are not going off like they did last year: 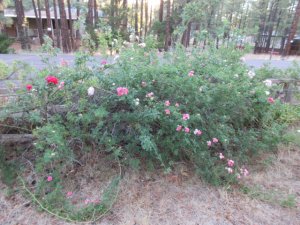 WELL, TIME TO TURN ON THE OUTSIDE LIGHT, MIGHT AS WELL GRAB A FRESH BEER WHILE I'M AT IT... THINK I'LL TAKE THE POOL TABLE WITH ME WHEN I RELOCATE, FOLKS INTERESTED IN THE PROPERTY DON'T WANT THE TABLE THERE, GO FIGURE, PFFFFFFFT.