How do we read this number:

As far as I am aware, it is just a Performance Sailcraft (Europe) manufacturing number and I haven't seen any details as to how to interpret it in relation to build date etc..

The sail (hull) number, should be on a plate on back wall of the cockpit.
L

Thank you. I always assumed it was something like that, but didn't know the actual details.
H

Got name of ownership and number 184993. Negotiating price. No water inside. It might be ok.

Well, that was fairly close

The tolerances for something like the width of the centreboard opening aren't public, but in no way are they large enough to cause the described difference. There must have been something else going on. Helge, did you actually measure those? How big is the difference?

The "300 g extra polyester" probably refers to the two fibreglass patches that PSA introduced to prevent the bottom forward end of the centreboard opening cracking due to high-speed towing. They were applied prematurely to production boats, but this was solved by LP adopting them, too (although LP later used the incident to complain about unfair treatment by ILCA). Whether that coincided with the colour change from Vela Grey to Ice Blue (in early 2016) I don't know.

Yes, I have read that. And since they dont allow any inspection, nobody knows how Iceblue and later boats have been made. Rastegar have a strange way of destructing the Laser class. Now he thinks that he can make more money on ILCA clones than joining the ILCA society in a responsible way. A true egoistic Business man. Hit and quit.
H 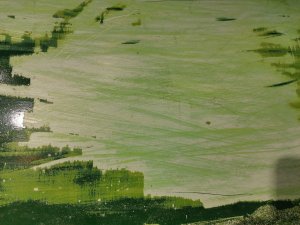 Turned the Laser upside down and started to get the single comp paint off. But there are two layers. Maybe three. And deep down there is white gelcoat. So the boats of the seventies were painted in different colours? 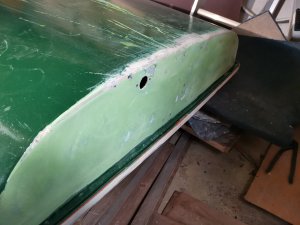 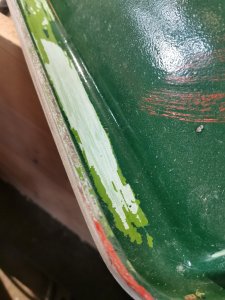 The builders never painted the boats. Looks like an earlier owner or two of that boat did, though.

Lali, you are right. One layer of white putty, two layers of single komponent paint. Under there is green gelcoat. Weak areas beside the keel. 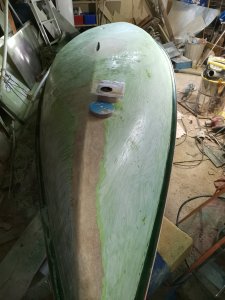 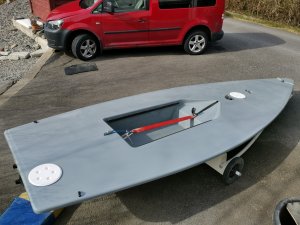