Kick up rudder - always kicking up...

I have a 1987 Capri 14.2, and have only owned it for one season. I've really enjoyed it, and have had a lot of fun sailing on Sacandaga Lake outside of Albany, NY.

The one critical problem that I have had, and just had this weekend, is that the kick up rudder is always coming up when I sail. I have to constantly re-tighten the nut while undersail, and even when tightened with tools, will pop up within an hour. If someone was with me this wouldn't be all that complicated, but I am almost always alone. This has become a dangerous situation pretty quickly on a breezy day.

It appears to me that the little nub that slips into the locking hole on the frame that holds the actual rudder has been worn down, and is no longer providing enough resistance, allowing the rudder to pop up with minimal effort. As far as I can tell, this is not a "user serviceable part" and would require the replacement of the entire rudder. Is this accurate? Has anyone discovered any workarounds to this?

My only thought is drilling another hole through the rudder and frame and using a bolt and wingnut to secure the rudder. This obviously will prevent it from popping up accidentally, but also prevent it from popping up when I would want it to, like when I run into one of the million rocky outcrops on Sacandaga. Maybe I could cut into the bolt halfway, that way if I hit something it would break the bolt instead of the rudder.

Anyway, I would love to hear some advice or tips!

Mine has a ball dedent on each side of rudder. I can actually hear the rudder snap in the down position. Not sure how it works....never took it apart. See pic below, arrow points to dedent. 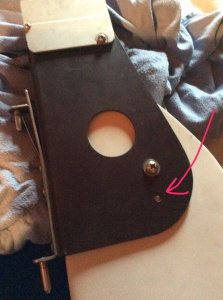 Thanks for your response!

Mine also has this locking system, and I too can hear it click into place. I jumped the gun in complaining about this problem publicly, and did not investigate enough.

I have since found the culprit. The "button" that locks the rudder into place has worn a significant channel into the black aluminum frame. It means that no matter how tight I tighten the screw, it just pops right out. I should have noticed this before, but didn't take everything apart.

The black frame is a 150 dollar part. I'm looking for a used piece, but can only find the entire assembly, and it's not much cheaper than a brand new one. I can't imagine how it happened, I guess insufficiently tightened down, and it allowed it to pop up too frequently?

I've considered some aluminum epoxy putty like QuickSteel, but I have no idea if it would actually hold.

We'll see if anyone else wades in with any suggestions.

OMG! Was the ball spring loaded? How about a bungy? 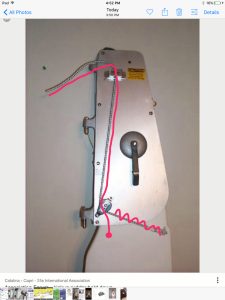 A bungee might work. I want to retain the rudder's ability to pop up if I run in to something. The lake I sail at, although very large, and often very deep, is also full of surprising rocks. I might rig the bungee temporarily, until I can figure out a more permanent solution. Thanks for your ideas!

OK you got me thinking and it is a rainy day so I took mine apart to see if I have such a groove. Being an ex engineer I have to say"Catalina what were you thinking "?
Those "metal round studs" on the rudder should be a replaceable plastic material. The start of the groove in the rudder housing has left the head of the stud very rough. No wonder it makes a groove in the softer material. The housing is not very wide to work in but I guess you could try and fill the worn track. Might be better off putting the rudder all the way down and drill all the way through with a small drill....remove rudder stock and open holes to the size of the existing snap hole....and drill rudder stock to fit a rd plastic dowel sticking out 1/8" each side or so...press fit rounded on ends.???? 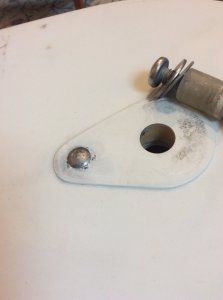 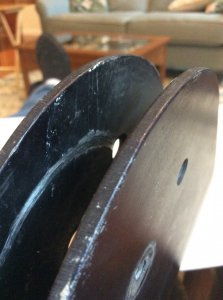 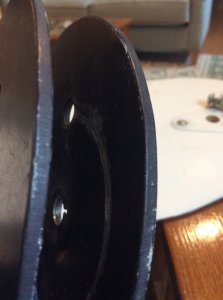 Yeah, I would actually encourage everyone to take a look at their tiller assembly, and make sure that this isn't a problem that is developing.

I agree, I think it's a serious design flaw, and pretty negligent, if I'm being totally honest. This boat was "new" to me last year, and I only had it out about a half-dozen times. The rudder kicking up on its own was quite dangerous, because it would only do it when I was going fast enough and the wind was strong enough. It was part of the cause of my first rollover, since it's quicker when solo to turn in to the wind and ease the main out than it is for me to let the main and the jib out at the same time. But when the rudder kicks up in this situation, you lose probably 75% of control from it. It was problematic.

My solution was more aggressive and damaging than yours, so thanks for the idea. I was simply going to drill straight through the rudder and the housing so that I could insert a dowel or a nylon bolt that would break if I ran into something with sufficient force. But, I like your idea better. We'll see what I can manage...

With all that said, I'd like to reiterate that any readers of this post should take a look at their tiller assembly to make sure that this is not a problem in development. But maybe this is a problem everyone already knows about?
B

Hello
I am new here and just purchased a really nice C14.2 for $500.00 complete with trailer. Aside from a few minor things, I am set to go.

Anyway, I too have the "kick up" rudder problem. my aluminum was frame is seriously grooved by the "balls" on the rudder.

Problem is now solved for less than $20 bucks! Get a pack of aluminum brazing rods from Harbor Freight and a propane torch. Just fill in the grove with the aluminum brazing rod using the propane torch. You may want to try MAPP gas instead of propane It get hotter.
Those rods do a great job and the filler is harder than the frame aluminum. I just then smoothed it all out with a Dremel tool and touched up the "ball" hole with a 3/8 in drill.

The ball holds firm in the hole like it should and still allows the rudder to kick up when necessary. Of course you can still adjust the kick up pressure with the tightening bolt.

Here is the link for the aluminum rods.
Aluminum Welding Rods - Pack of 8 Low Temperature Rods

Thanks for your response Bill, and congrats on your new acquisition! That sounds like a heck of deal.

I like your solution a lot, and frankly wish I went that route. Unfortunately, I've already gone down the QuickSteel route because I wanted to get out on the damn water!

I don't anticipate it lasting the season, as I found it to be suspiciously easy to sand down. But, for 6 bucks, I figure that it will last a few outings.

Once it wears out enough I'll sand it all out and use your method. That sounds much more permanent. Thanks again for the idea.
You must log in or register to reply here.
Share:
Twitter Reddit Email Link
Top