Can someone advise how long the jib car track is on a Mackay 470? I obtained the Harken p/n 2707 but they have several different lengths from 0.6m to 2.5m. Thanks in advance.
L

I think that the 600 mm (shortest) cut in two 300 mm pieces would be fine. If you want to be absolutely sure, get the next size up (1 m). Just looking at pictures, the standard Mackay tracks are at least 400 mm, and extend quite far forward. Although people often calibrate them all the way, I doubt that they actually use more than a fraction of that range.

What did your boat originally have?

Thanks LaLi. My boat has a makes shift car that is free from the hull, no track (see photo). Ill go with the 1m and cut it down if I need to.

That's no "makeshift" system... it's a twing-style jib lead adjustment. The padding is somewhat over the top maybe (probably intentionally, to bring the lead a bit inward), but fundamentally it's similar to what I had in my boat a long, long time ago. It's simple and it worked, and I didn't quite understand why anybody would prefer a track (and I still don't

Have you tested it, is there something wrong with it? To me it looks like someone has actually put some thought into it, with the uphaul elastic, scales and all.

Oh, I didn't know that. Is that how MacKay outfitted their boats? I believe this hull is a mid '90's build. I don't see any screw hole repairs on the hull so the boat must not have had a track in the past. I sailed it a few weeks ago and it seamed to work fine, so now I will keep it instead of spending money on new fittings. Thanks for the help
This boat was a NZL Olympic trainer at one time, then a guy in Coronado had it before my my friend who I bought it from.
L

Nautical44 said:
Is that how MacKay outfitted their boats? I believe this hull is a mid '90's build.
Click to expand...

The twing system was just about as popular as the track back in the 1980s, but not many use it today. Mackay still offered it when I last looked at their order form a couple of years ago, but it's not there anymore. The padding/risers on your lead blocks are very likely homebuilt, though.

What does the IYRU or ISAF plaque on your boat say? (Picture please!) I don't have any kind of list of the international serial numbers (and don't know who, if anyone, would), but I could try to figure out the approximate building date anyway.

I sent an email to Mackay to see if they had info on my hull number (151) and this is what they sent back.

The sail sets still have their identification buttons attached as well.

(Found another interesting number though, which I'm going to post now in another thread...)

Thanks for your detailed info. So is it safe to say that this boat was sailed by Andrew Brown and Jamie Hunt of Force 470? or did they have several boats in the Force 470 team? 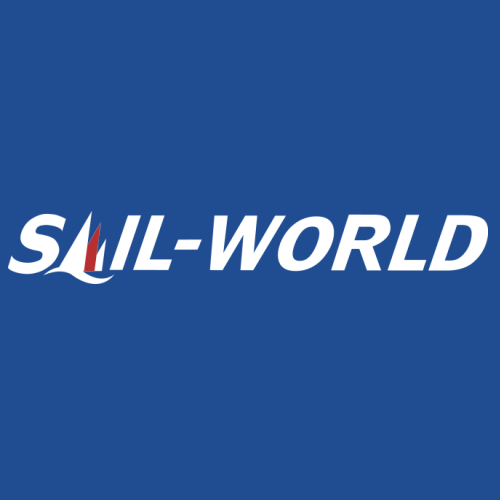 It looks like there were no other sailors in the team besides Andrew and Jamie, so they definitely sailed your boat. You'd think it would be the same one with which they sailed the 2005 Worlds in San Francisco (and then presumably sold in California), but that was definitely a different boat: 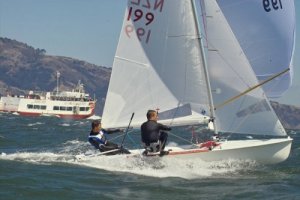 They actually sailed in the 2004 Olympics in Athens, too (no, that boat didn't have a grey deck, either), but finished only 26th. They obviously worked hard for many years but never cracked the top 20 on the World championship level.

By the way: the sail buttons are a kind of tax stamp which the sailmakers buy from the class association. The numbers on them don't identify anything.

That gold spin pole is what I have, haven't found the end fittings though, I ordered a pair of Selden fittings from Mackay but they were too small. This photo is of the dolly that came with the boat, looks like they had NZL 191 sail numbers at one time. Expect the US owner bought new sails as none of the sails I have are marked. Came with two mains, three jibs and two spins and two booms and two rudder blades.

Nautical44 said:
That gold spin pole is what I have, haven't found the end fittings though, I ordered a pair of Selden fittings from Mackay but they were too small.
Click to expand...

Your pole was made by (of course!) Goldspar of Australia

Strange if standard size fittings aren't a good fit. What's the inside diameter of the tube?

I have Superspar tubes at hand (what, doesn't everybody keep spinnaker poles in their living room

), and their internal diameter is 21 mm.
I also have a pair of Ronstan end fittings that are 27.7 mm outer diameter... probably intended for 28 ID tube. Won't quite fit either.

It's a strange sized pole that you have. Best to use those Seldén fittings and figure out a way to fill out the space in between. Pieces of some sort of 22/27 mm ID/OD tube? Could be of any material.

That’s certainly a Simon Cooke designed boat. The traveler bar and floating jib leads are clues. There is nothimg wrong with the floating jib lead system. If you do change, you will need to secured a jib box that affixes to a Harken car. This is potentially a lateral move as there are complications with that system, as well. That said, all boats these days favor the jib track system.
You must log in or register to reply here.
Share:
Twitter Reddit Email Link
Top