I'm looking at purchasing a J/24 that needs some seemingly major keel repair (along with vermiculite repair), and am wondering if anyone has seen damage similar to this. I'm looking for some guidance as to what will be involved with the keel repair, in particular (the vermiculite replacement procedure is well-documented on the internet).

The boat also needs part of the decking under the winch and between the traveler and cabin repaired (soft), but that's also well-documented.

It appears that water began working its way into the keel possibly via cabin/deck and down through the vermiculite, and then went through quite a few winters of freeze/thaw cycles in Montana (extreme cold in the winter) which lead to the ice pressurizing and breaking the keel open where the water had collected. This makes me concerned that the entire structure of the inside of the keel is a mess, and will need some serious surgery to restore its integrity. I do not know what the internal structure of the keel looks like (all glass with some lead somewhere?) or what the implications are for this type of damage.

The boat will be used in Jackson Hole to teach local kids to sail via our nonprofit Jackson Hole Ocean Sailing Team (we train kids locally and take them to California to race on a Santa Cruz 52). I do not want to chance having the keel fall off with other people's children on board, so the repair would have to be done right. The boat won't be raced, so it doesn't have to be the fastest J/24, but it does need to be safe.

Based on these photos, what is likely to be involved with the keel repair? Anyone have any experience with something of this magnitude? Any insight as to the internal structure of the keel?

I know many would say 'walk away', but we don't have a lot of funds to buy a boat, and we can do repairs, and most of the other boats are much further away (making acquisition/inspection more difficult). Walk away may still be the answer...

Thanks in advance for any insight... 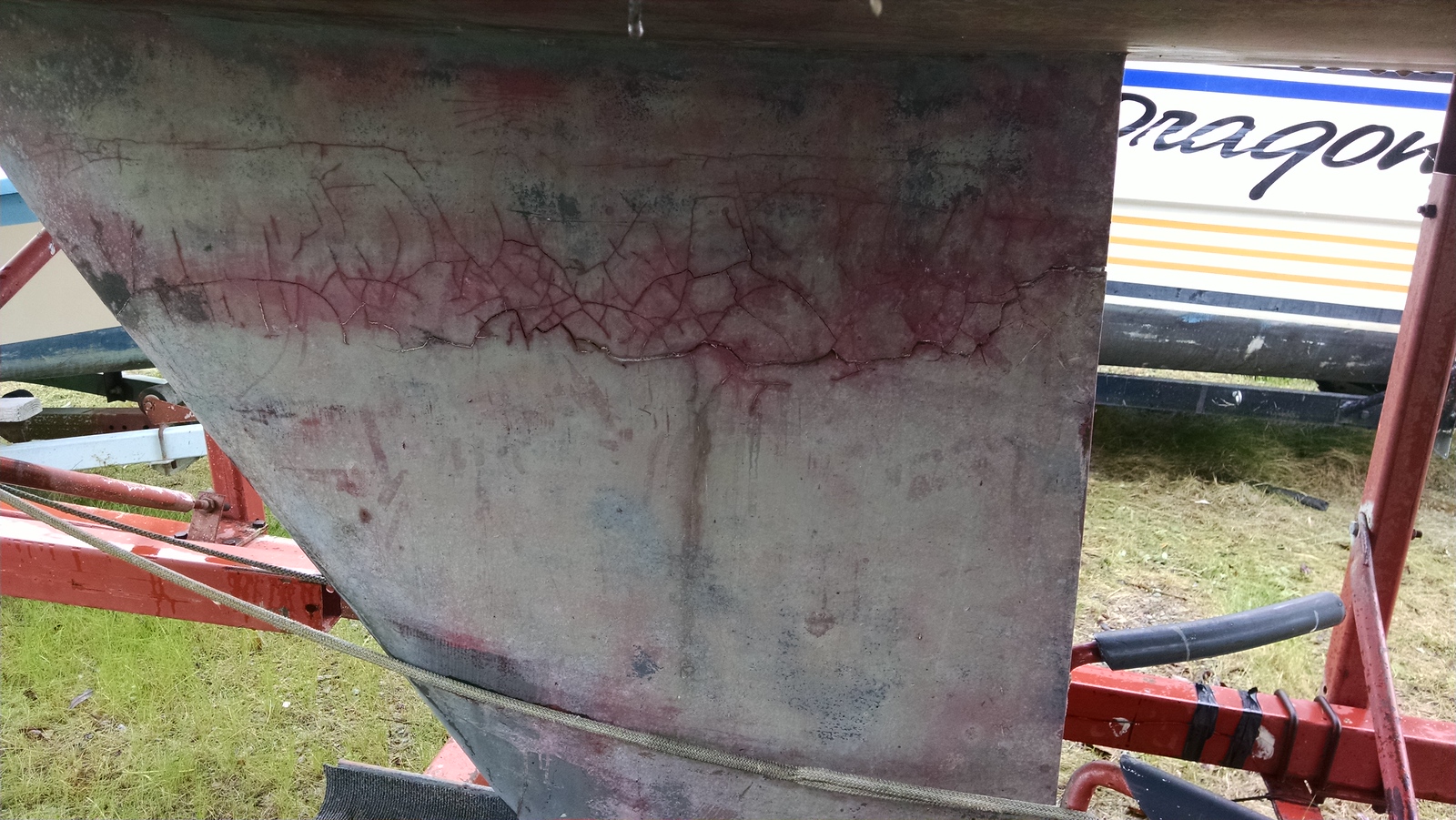 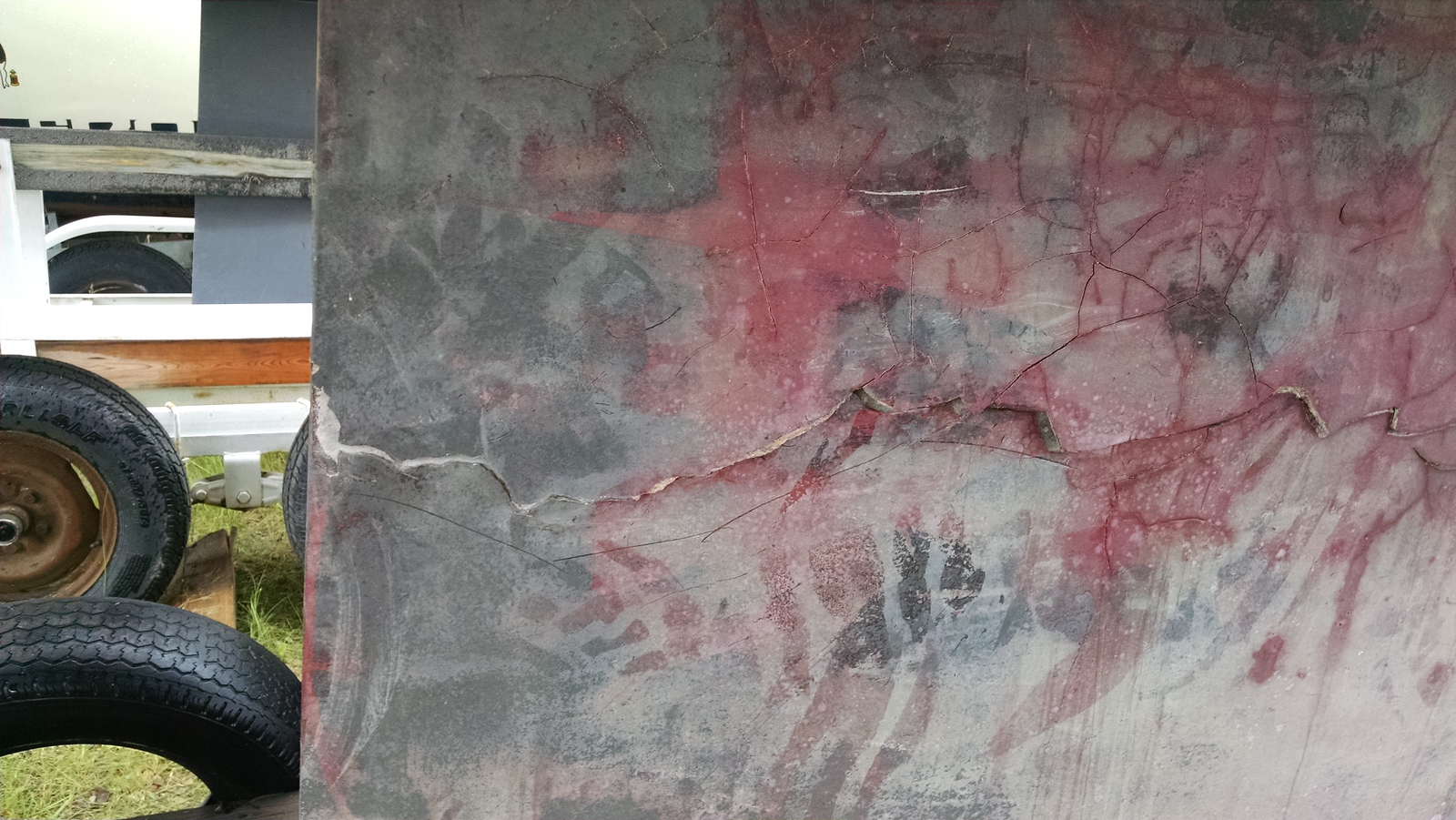 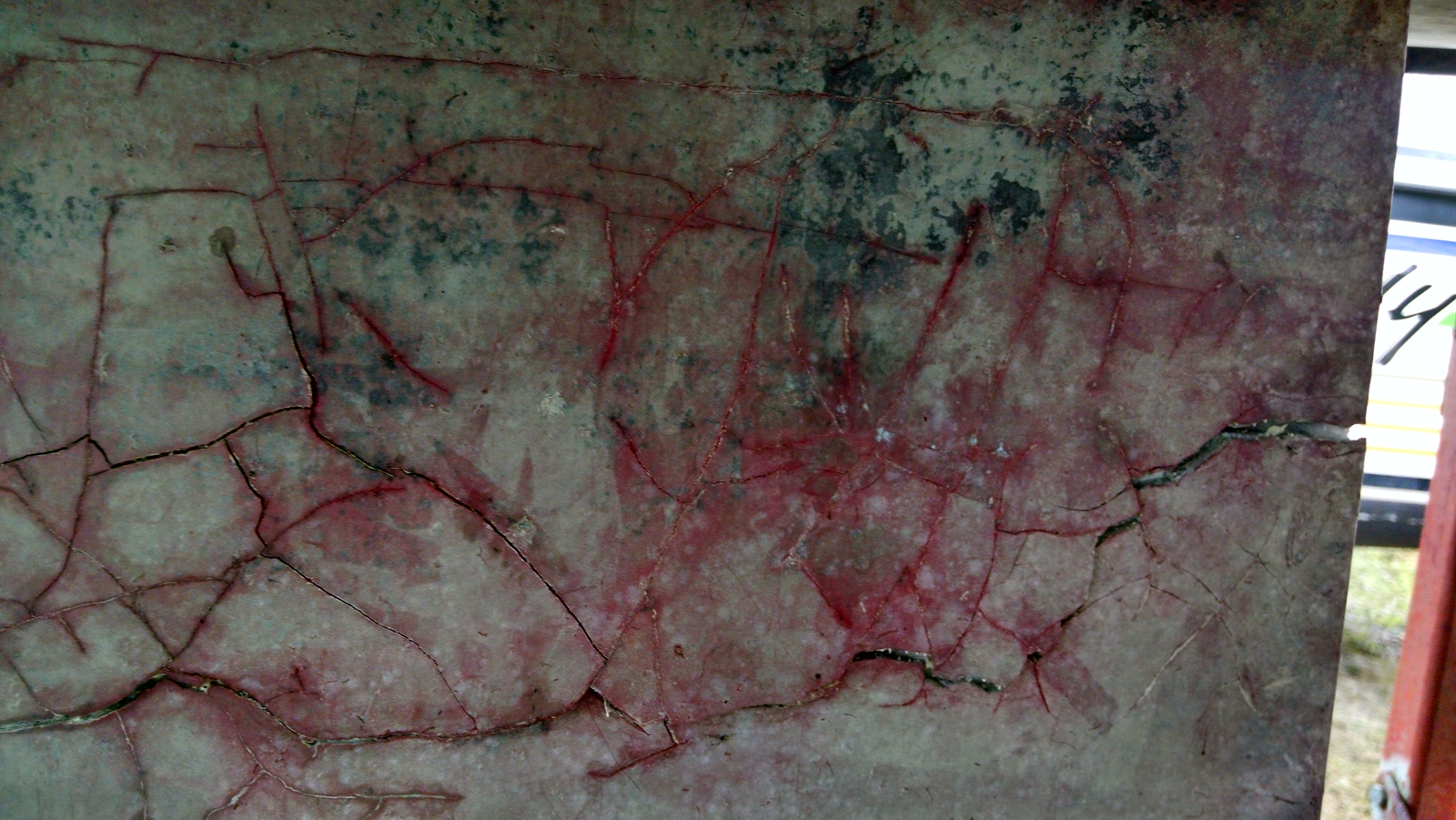 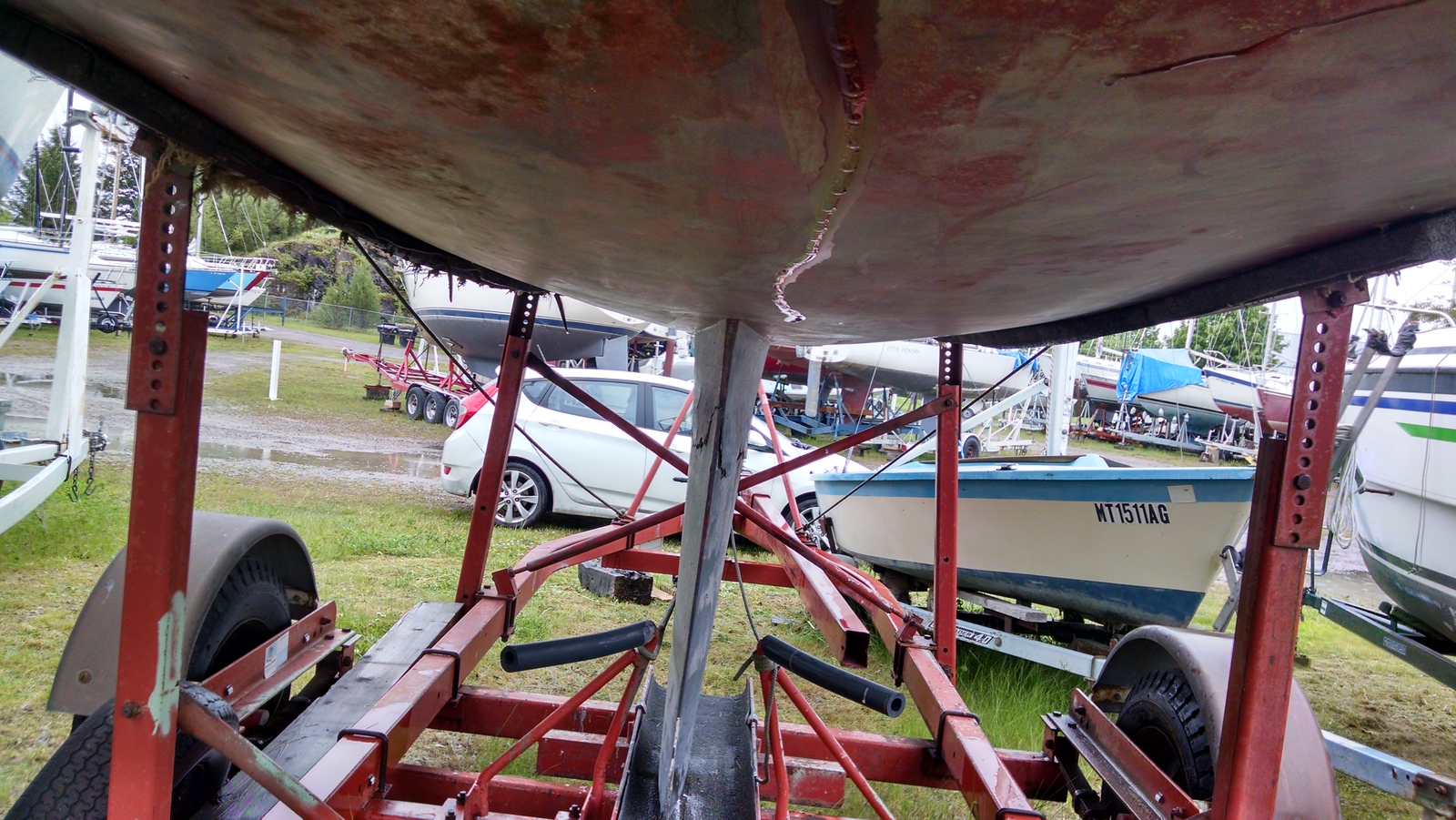 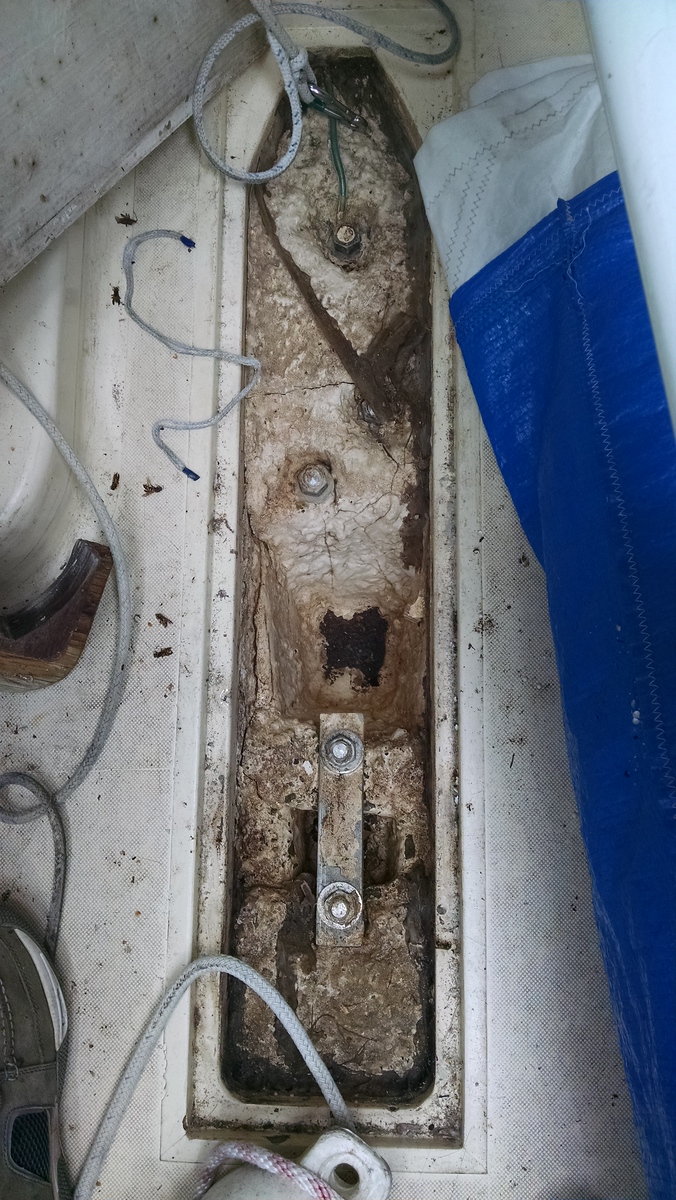 Looks like it froze with the hull full of water... its fixable but it might cost more in repairs than buying one that doesn't need fixing.

I'd strip it for hardware and scrap metal.

The owner says the lines on the hull are water running down from the rain.

He's asking $2500, but trailer has no title or working lights, the four stroke Suzuki 4hp is reportedly in good shape, and it comes with what sounds like two full sets of serviceable sails. It's an eight hour drive away, so I won't know much more until I inspect it in person.

I'm just concerned with how much work will be needed to make it seaworthy.

I'm not convinced that keel is even repairable. The vermiculite is clearly compromised and in need of the overhaul kit.
Last edited: May 23, 2016
F

Parts boat. Probably has everything you could need to replace hardware on a good hull.

The 4 HP and a potentially serviceable trailer (if you can deal with registration.... some states that is easier than others) along with a good supply of fittings, sails, mast/boom, etc....
Might make it worth getting even expecting to need to scrap the hull.

ANYTHING is repairable...
It turns into a question of how much repairs will cost vs the cost of a different hull.

Staff member
It looks like the Jackson Hole program is a 501c3 organization. If true, the current J24 owner should just donate the boat and take a tax deduction. The boat needs so much work that it really should be a freebie to the program.

Wavedancer said:
It looks like the Jackson Hole program is a 501c3 organization. If true, the current J24 owner should just donate the boat and take a tax deduction. The boat needs so much work that it really should be a freebie to the program.
Click to expand...

I did mention the donation possibility, but there was no interest. This boat happens to be closer than any other at reasonable prices ($5k range), but a solid $5k boat from CA is looking like a better option. The original ad said "slight delamination on keel", but apparently it got a lot worse over the past winter.

I'm just not sure what is involved with repairing a keel in that state so that it will be roughly as strong as new, and we don't have any yards anywhere near here that could handle a repair like that. I'm a little concerned it's too much for a first time DIY (I've done minor repairs in the past, but this looks like a serious engineering/structural issue).

Has anyone seen keels in this shape repaired, and/or what it involves?

Alternatively, is it possible to buy a keel in good condition?
S

Personally, I think $2500 is way too much for this condition. I'd keep looking...

After further consideration, and further shopping, I've found another older one in good shape, complete with gear and good sails, that has no delam or soft spots (always dry sailed), needs no repairs (still has vermiculite), has a tandem axle trailer with new tires and is $4k. Seems like a no brainer compared to the one above.
G

Is that filler or lead delamination?

Geo. Cushing said:
Is that filler or lead delamination?
Click to expand...

I don't know, I never looked at the boat in person. It really needs a new keel. No idea if the guy sold it or not. It looks like the glass delaminated from the lead IMO, but I'm just going off the photos.
V

I realize that by now this may be moot, but probably someone else might be glad to know in the future: There's not that much wrong with this keel.
It can probably be fixed in ~10-20 hours by an amateur (ask me how I know!). It's quite a bit more if you feel the need to fair it to optimize it for racing. AND, you're almost for sure (especially in this case) going to need to remove the vermiculite filler under the floor, so that will about double or triple that time. But it's really a separate and very good accomplishment from fixing the keel, so I keep the hours separate.

The construction consists of a fiberglass keel stub protruding from the hull that the keel bolts up to, with some fiberglass tape over the joint and fairing material. That's about it! Water got down the keel bolts and in the gap between the stub and the keel, froze, and cracked the tape and fairing compound. The stub projects down from the hull ~185mm. It has a bit of a recess and the keel does too, to accommodate several layers of fiberglass and some compound to fair the whole business together. All the cracking you see in the pictures is centered around that area 185mm below the hull where the keel / stub joint is.

So, with most of the boat's weight on the keel, you get a grinder and grind away all of the glass tape and filler. Avoid grinding holes in the keel stub (top part) that's fiberglass (as opposed to the bottom part that's lead). Let it dry out. Water is surely leaking out of the sodden vermiculite cement in the sump inside (that's the stub viewed from the top, inside the boat). So the plot thickens.... You should cut out the floor about an inch from the bunks and get that stuff out of there. Probably use a big hammer-drill with a chisel tip. Like an electric jack-hammer. (tool rental place) Can be done in an afternoon. You can read more about removing the vermiculite elsewhere. It's been well discussed and documented, but you don't really need to know much more than what I just told you, honestly. Probably will want to clean up the bits still adhered to the hull with your grinder with a coarse sandpaper disc.

It was initially put in there to make the keel / bilge / hull a monolith, with the bad idea of using vermiculite cement since it's lighter weight. But it gets waterlogged and that's no good. It loses it's stiffness.

Once it's out of there (at least some of) the keel bolts no longer have anything that they're cinching down on since they were cinched down on the vermiculite cement filler in the bilge. So the bilge sump needs to be re-filled. You can use a couple of gallons of polyester resin with a bit of chopped fiber mixed in.

You will need to install some "keel floors" to stiffen things up first, since you won't fill all the way up to floor level like the vermiculite cement did. These are fiberglass stiffeners made to fit in between the hull and the floor. Maybe they can still be purchased. If you have to make them, well, the plot thickens further, but you can do it. And when you glass them in, use about 4 overlapping layers of something like 10-12 oz. cloth, properly wet-out. Their job is to keep the hull stiff in the keel area, so they should be attached very well.

When filling afterward, do it in several stages so the resin doesn't overheat. Then tighten up the keel bolts a few days later.

Now that it's all dry and the keel is firmly attached, you can put that glass tape on around the joint and fair it. The glass tape isn't holding the keel onto the boat, so a couple of layers of something like around 10 oz. should do it. You can use bondo (probably not the best) or epoxy with phenolic microballoon fillers to do the filling. Then some paint. Since you're not racing in the worlds, it probably shouldn't be too difficult to get it reasonably fair.

I did all this to my boat 20 years ago. It had been sitting in a yard like the boat pictured, for several years, collecting water. Raced it successfully for ~15 years. Won regattas (not many. Competition was good in Annapolis), won quite a few races, were quite competitive, etc. I did spend a while fairing it to the class specs.

I would say, to do it in my timeframe, you should just hit it and do it as I describe. I'm really not leaving much out (Ok, you've got to make a new floor and learn a bit about how to properly tie-in the keel floors). You can be done in 30-40 hours, but it will take longer if you look at it too much. I know from firsthand experience.
You must log in or register to reply here.
Share:
Twitter Reddit Email Link
Top