I typed these up for people installing the Bottleport but thought they could help anyone putting in a port. This is in addition, of course, to all of the other install tips you can find by searching old posts here and note, of course, that YMMV:

--HOW TO PLACE AND TRACE THE HOLE: What makes this very easy is that the lid of the Viking 5" port is exactly the same diameter as the hole that you need to cut for the port. The best way I've found to place the hole is as follows: With the lid screwed into the ring, put a couple of pieces of foam double stick tape onto the top of the lid (not the ring) and then move it around the spot you're thinking about until it's exactly where you want it, then press down and stick the lid to the boat. Now unscrew the ring and take a felt-tip pen and simply trace around the edge of the lid. Be careful if you use a Sharpie (or other permanent marker) as you may leave a black ring around the outside of your lid as I did the first time. Now unstick the lid. You will have a hole drawn that is perfectly placed and sized for installation.

--CUTTING THE HOLE: I'll say right upfront that I don't yet have the right tool for this. I used a jigsaw for the one in the photo below but it was a real PITA because there isn't enough clearance though it would work find on a deck install. I tried a Sawzall but it was just too hard to control. There's a saw at the hardware store specifically designed to cut round holes, maybe that would work. Anyway, as you probably already know, just drill a big hole inside your cutting circle and then use whatever tool you settle on to cut from there to the circle mark. I'm sure someone has the perfect suggestion for the tool. Ron Lane at FastLane Sailing Center in San Diego (the newest Bottleport retailer...thanks Ron!) said he keeps the perfect tool there at his store for people to use (rent?).

--HOW TO ORIENT THE BOTTLEPORT BUNGIE (optional): If you want the Bottleport to align a particular way, then screw it into the port ring FIRST, before installing it, then make a mark on the ring at the point that you want to be the top and make sure you install the ring with that orientation. Then, every time you screw in the Bottleport it will align the right way. In this photo, I wanted the bungie to run horizontally so that I can pop it down and in as one would naturally do with the port placed there: 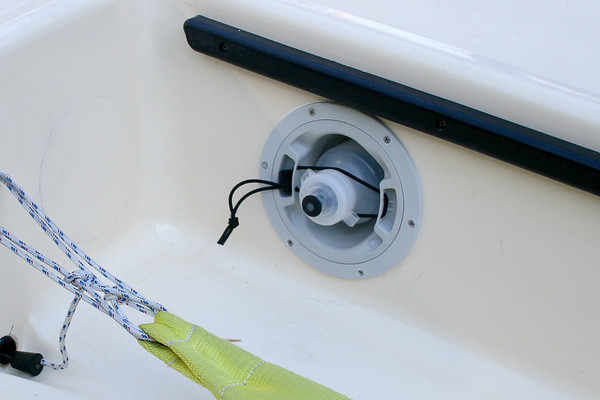 On the daggerboard trunk, though, I don't think it makes any difference except aesthetically...mine is sort of diagonal now and it would have been nice and symmetrical to have the bungie running either straight up or straight across. But functionally, no difference.

I've found that this placement is the best way to make sure the there is a perfect seal between the ring wall and the boat hole. Applied this way, most of the excess goes into the hole and forms that seal, which you can verify when it's dry by poking a toothpick around the inside edge of the hole. Water might still get under the flange until it hits the 5200 barrier further in but that's OK because you've sealed it all up including the screw holes as discussed below.

Now, paying attention to the mark you've made indicating the top of the ring (if you want the Bottleport orientation a particular way as discussed above), insert the ring into the hole about a quarter turn away from where you want the to end up, rotation wise. Without pressing all the way down, but enough so that the 5200 contacts the boat, give the ring the quarter turn to orient it the way you want it. That will spread the 5200 a little bit and also cover the screw holes (that you've drilled previously) with it. Now take your screws and before putting them in the holes, put a dollop of 5200 on the tip. This will make sure that the hole is completely filled and give you a nice seal all the way up to the top of the screw. Wipe off any excess (with practice there won't be much or any), being careful not to get it into the part where you stick the screwdriver (that must have a name...I wonder what it is?). Some people suggest not screwing them down all the way until the 5200 is close to dry so that you compress the 5200 even more when you're done. I disagree as I would rather have the screws firmly bedded and not break that seal to finish screwing them down.

--HARDWARE: I used 3/4" #8 stainless Phillips flat-head sheet metal screws (the ones with thread all the way up the screw). 1/2" would have been sufficient and maybe better. After trying a couple of bits, the right one to drill the pilot holes was 9/64. It was an accident, but I found that drilling the holes first with a 1/8" bit and then final drilling with the 9/64 allowed me to correct the placement that little bit by applying some sideways pressure in the direction I wanted the hole to go while drilling.

Hope that helps if you are installing a port!