This was my first time sailing the Around-Shelter-Island Race, which was celebrating the 51st year.
Attached is a rough path many of us took, on average, through the race.
I was wondering how far I sailed, and how long the tow-in was, so did a quick Google Maps study.
Looks like about 17.5 miles sailed until the finish line (shortened race), then 5 miles or more on the tow back to the Southold Yacht Club.
I finished in 5 1/2 hours, with sanity intact (barely).
We had all kinds of wind, from none to slight hiking wind.
The wind was on our nose out of the club and was supposed to clock around from about 45 degrees to 135 degrees by the end of the race.
The starting wind was true to forecast but died as we got out in the channel of the Peconic and we all dealt with swirlies for the rest of the race.
The Southold Yact Club operation to run the race is huge - there were 17 support boats on the water to monitor safety of sailors.
Thank you to all those club members that sacrificed a beautiful July day to help us waddle around the Island.
The after-race chatter was excellent, much camaraderie.

Thanks to LM for bringing the race to my attention earlier this year on his Youtube Channel and on the Sunfish Class Facebook site.
Looking forward to the 2023 race! 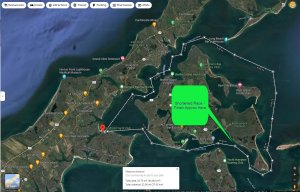 I think you have the as-the-crow-flies distance about right. But those who weren’t there should know we sailed much further. We tacked all the way from the start to the big right hand turn to head south on Gardiner’s Bay, and as the wind had shifted south we then tacked all the way to the southernmost point of the race. After that we sailed a tight port reach and then even had to tack one or twice approaching the finish line!

It was my second time racing there and it is absolutely incredible how places can change. You’d think if someone was a half mile ahead or behind you you’d never be close to them again - but not so! The current, wind changes and tactics permit huge gains and losses throughout the race.

Also, my hat is also off to the club - what an amazing job they do to let us race safely over a large area!

Great adds, Chris - I wish I turned Map My Walk on my phone before the start but that may disqualify me for having/using GPS.
The actual trace from that would have been comical.
I found the wind didn't behave the way I would predict according to lake sailing I do - I didn't detect super-helpful lifts around protrusions of land, for example.
For me, the air seemed to be quite often in the center where, of course, the current was working against us.
Also, much of the air didn't show on the water once it got light. I didn't see the wind lines making a huge difference.
That all could just be me, though.
It was a series of puzzles to solve all day long.
You must log in or register to reply here.
Share:
Twitter Reddit Email Link
Top