How do I tell if this is a good buy/boat?

I looked at what I think was a sunfish, used, in terrific condition. I has a few concerns: 1) why would a Sunfish have a non-sunfish sail -- it has a sail with a viking helmet on it; 2) the current owner put a drain plug in the very back, but said it has not taken on any water -- is that normal: 3) I didnt see any sunfish logo on the hull anywhere?; 4) there were plexiglass screw opening (4 of them), 2 in the front and 2 in back -- I dont see those on other Sunfish???

Thanks for your help.

Have you looked at the Sunfish webpage to familiarize yourself with the brand-name Sunfish? ( http://www.laserperformance.com/main/images/stories/pdfs/Sunfish/SunFish_sellsheet.pdf ) The name Sunfish has frequently been applied by the general public to boats sporting a lateen sail from other builders. Did you notice if there was a builder’s name plate somewhere. Depending on the year there could be an ID molded on the back of the boat that looks something like AAA 99999 M78. That type of ID can be looked up as to the builder. Did you take any pictures you can show? Is this the sail symbol?

thanks and please tell what you think

Staff member
Looks like a Sunfish clone to me. But follow Dan's advice; get the ID and use that to find out when the boat was made and the manufacturer.

Here’s what I think I’m seeing in the ad photos.

I believe the boat is a Viking, aka Funfish, dating back to the 1970’s built by:
International Fiberglass Company, Inc., later becoming the International Boat Co

The evidence that it’s a Viking is the metal collar around the mast tube and the plastic drain plug on the port side deck. Their sail insignia is a Viking helmet,

The rudder looks like a newer Sunfish rudder adapted to the Viking’s box style flip-up bracket attached to the transom.

I can’t explain the addition of the two small inspection ports, no reason is apparent in the photo. On a Sunfish these would be right over the port and starboard float blocks.

If the hull is in sound shape, the sail still has life, and there’s a trailer it could be worth the asking price, but given it’s age and not being a legitimate Sunfish, I recommend negotating downward a good amount.
I

Thanks for all of your input. The thing that baffles me is that the boat looks brand new. But I may email the buyer and see if there is a serial number in order to confirm that it is the real deal. I It looks pretty close to a genuine sunfish...but i have never seen 4 plexyglass holes in the deck on a sunfish before.

As I understand it, Funfish was such a close copy they were sued by Sunfish. That's when the name changed to Viking.

The hull ID is likely to begin with XBC (International Boat Co., before they passed the Mfg. code to a rubber raft maker)

You'll need to make a personal inspection to judge the boat's condition. Pictures help, but can overlook much detail.

The 4 plexyglass holes are owner installed. Why, who knows... you'll have to ask the seller.

I found a couple of photos of known Vikings for you.

Price at $800 seems really high as its not a Sunfish. If it was a Sunfish it would be good in the condition your describing.

Being a knockoff its just not going to bring a lot of money when you resell it someday....

Martin said:
The thing that baffles me is that the boat looks brand new.
Martin
Click to expand...

Lots and lots of people bought a "board boat" in the 60's and 70's, sailed it 3 or 4 times, stuck it in the garage or the barn, and something happened (new baby, new spouse, new job, personal loss, etc.) and they never got around to digging it back out. It stayed, waiting for someday, but someday never came. Those are the occasional gems we find today.

You still need to take a friend along, lift the boat, turn it over (listen for a slosh), open up the drain plug (wherever it is) and see if anything comes out, and all the other checks you can find through looking back through this forum or by visiting the Yahoo! Groups sunfish_sailor page (you'll have to "register" to gain access to all the knowledge there, but it's free and safe. I've been signed up for it for YEARS!).

I agree $800 is a bit steep for a clonefish, even in mint condition. You would be hard pressed to get that much from anybody else.

If you work out a deal, enjoy the boat! I should easily give you 20 years of good enjoyment.

"Search" brought up this old thread with the name "Viking", so I thought I'd add a few pictures from a real Viking—in superb shape. The Viking is a very close copy of the Sunfish, but the deck doesn't seem to have the strength of the Sunfish. So what happens when you find a pretty Viking, and their unique rudder is missing?

The first is a photo of the gudgeon (bracket), a proprietary part not similar at all to the Sunfish; however, since the Viking factory used exposed nuts and bolts, a replacement would be easy using the "new" stainless-steel Sunfish gudgeon—used on Sunfish since 1971. (Only $12 for a new one). 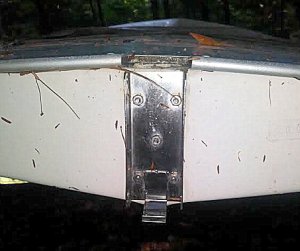 If you own a Viking, ask for any pictures you need while this Viking is still in my driveway.