I snapped a photo of my new, improved sunfish dolly. The first dolly was made from some hard rubber wheels I got from Harbor Freight and they didn't work very well in sand. The short axles didn't work very well either. I ordered a wheel and axle kit from "wheeleez.com" which solved the sand problem and provided a much more sturdy axle. They call them low pressure balloon tires. I also coated the entire wood assembly with epoxy resin which keeps it somewhat waterproof. To use, I insert the assembly in the daggerboard slot through the bottom and roll the boat across the beach.

Emilikins - if you want to make one, I recommend using this photo for an example instead of my earlier post in your pajama pants thread. Good luck!

Will do! We have plenty of scrap wood (albeit nice scrap wood), so we'd just need the wheels and axle. I've seen those wheels at TLC (haven't really looked at Menards or Home Depot yet). Do you have a schematic at all?

I do wonder about putting extra stress on the bow handle and daggerboard trunk with this type of dolly, but it IS economical (and probably easier if you're a 2-fish family).

does anyone have the plans to build a dolly and pictures?

Cavi said:
does anyone have the plans to build a dolly and pictures?
Click to expand...

if you browse this site a while, there are a variety of different home-made types. this is the one that I made: 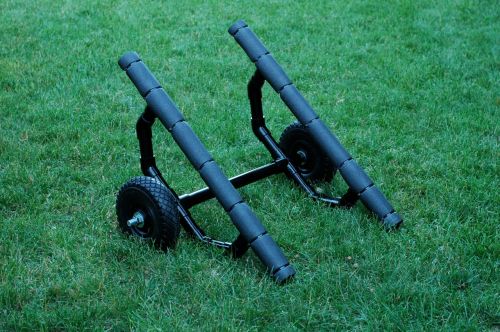 I've never sketched up plans or anything, but I detailed the parts, etc on my blog.

We still haven't got around to making our dolly. The inspection ports are half done (we've made the holes and dried the boat out, but now the basement is too cold for the adhesive). Does anyone have measurements? I've poked around off and on here, and we see pictures but no details.

Also, how do people store these on trailers? The little daggerboard numbers could just be thrown in the car trunk, but what about the longer ones?

I took some more pics with the tape measure. I really am happy with this design. If you are worried about the stresses on your boat then maybe your boat is too weak to take on the water. There's no way this could damage any of my sunfish. The parts are made from 2X4 cedar. Enjoy.....

Staff member
I checked out that dolly and it is awesome!

Awesome, I've got a new project! Oh, I only heard that the daggerboards one might cause damage, I'm not scared of our fish (they both sail).

Staff member
Cookinwithgas was in town sailing and brought his dolly by my house so I could check it out. He also needed a pintle

It is very light and works well in tight places. The beach wheels are nice. The wheels come off easy if needed. Definitely good if you don't want a full size dolly or have to trailer your boat and have space constraints. So I rate it as awesome

Okay, I'm still going back and forth on what sort of dolly to build, though I'm convinced we could and should do it. But I have a couple of questions on ease of use.

Daggerboard style - I've seen pics for the Rollatote (or whatever it's called) that has a woman tipping the Sunfish on its side, sticking the daggerboard part in and setting it back down. Since we'd be most likely to do this in the parking lot before the boat ramp (or beach, though many of our lakes don't have those near the boat ramps), I'm sure the pavement is going to leave its marks on our boats (though they already have their fair share, they are old ladies, after all). But I'm also wondering how easy it is to remove the dolly after you've rolled the boat into the water? I imagine the water would push it up against the hull, making it harder to extract.

Tag's style - I've seen variations all over the place. I'm kind of thinking of doing something like that but also with signal charlie's extended tongue, but maybe make it foldable, so we can just throw it in my Elantra's trunk (like the Seitechs). I did find a video of someone using a similar dolly and demonstrating how to load and unload from the trailer. Is that how you do it, tag? Does the boat slide around on that dolly, since you're pulling by the bow handle? I suppose we would always throw a tie down around it. But this certainly looks like a fairly easy load and unload.

I personally didn't like the style and manner of use of the daggerboard style - hence the reason for making mine.

I agree that adding an extension towards the bow would be a good improvement, especially if you are going to be on soft sand at all. the dolly wheels will get stuck in really soft sand - and I'm not sure that even having the even fatter balloon tires would help. so a handle would help, although I can usually get by with just a piece of line from the dolly up towards the bow handle.

but if you will be launching mainly from boat ramps, grass, or hard packed gravel/sand - then my dolly works great (and a handle wouldn't be required).

for unloading the Sunfish onto the dolly, I usually just set the dolly on the ground a few feet behind the trailer, and then use the rollers on the trailer to back the Sunfish by hand until it rests on the dolly. it takes only a minute or so. then I just roll it down the ramp and go! my dolly is (mostly) water-tight, so it will float up to the top of the water after I slide the Sunfish away.

it certainly isn't a Seitech dolly, but it works so far for me.

Oh, good idea on the line! I think I'll go that route, but I think we might attempt to use the pile of 2x4s we have in the basement and make a variation on what you've got. Since we don't have rollers on our trailer (we've got the cradles), I think we'll just position and guide the boat onto it. We also have scrap carpet we could use on the wood, but I wonder if foam might be better so it doesn't slide but also doesn't scrape the hull?

Only one of our lakes of choice has a nice sandy beach for launching (and also the widest, gentlest, straightest shot of a boat ramp), but it's also the farthest. Since our trailer can also be a double-decker for two Sunfish, I think it would be nice to have the dollies in order to quickly unloaded and either get them to the beach or tied to the dock and out of the launch, since our trailering skills are novice and, oh yes, the lake designers around here like to put the ramps in corners ...

It would also be handy if we go on our dreamed-up camping trip with the boats, because who knows what sort of places we'll encounter?

I've used the dolly shown in the video (yep, that's me) for a couple of seasons and it's worked great. I launch from a beach that consists of fairly well-packed sand and haven't had a problem with the wheels digging in or the boat accidently sliding off. I suspect the larger balloon tires would be even better, but I was going for a cheaper solution. I wrapped the foam that's around the dolly's PVC tubes with the stuff made to go in kitchen drawers to keep items from sliding around. It grips the hull very well. I also have rings attached to the ends of the axle. The idea was to bungee the boat on the trailer if sliding became an issue, but I haven't needed to use them so far. The dolly is so buoyant I could probably go sailing and it'd stay in place - it has to be pulled from underneath once the boat is afloat. You may can tell in the video that I have a wooden cradle attached to my trailer. I cut the cradle's four ribs to fit the hull's profile and covered them with foam and then carpet - that way the boat slides easily off/on the trailer without scraping the hull.

Here's another take on a dolly: http://www.eltoroyra.org/photos/Dollies/Dollies16.JPG

I'm tempted to try it, since we have the wood and our trailer cradles would provide the template, but I like the other dolly being higher up for easier transfer to and from the trailer (in my head). Some interesting things on this site. I do think I'll be going to Lowe's tonight and getting the stuff for tag's dolly. Seems the easiest and most economical route, plus it should fit nicely in our car trunk.

I did see these kayak dollies out there and thought that might be a workable solution and did find Sunfish owners in some of the reviews. Quality seemed hit and miss, and Sunfish owners didn't seem thrilled with the set up (hard to keep the boat stable). So I'd likely winding up finding a different solution, anyway!

Today I made a short video retrieving my Sunfish from the beach. The sand really requires the fat, soft tires. I tried it with some skinny harbor freight wheels and they got bogged down in the sand.
P

I like the trailer system, it seems quick and secure. Good stuff.

Staff member
I want the curly pool noodle on the spars...

Dolly nearly done! I've gooped the sections together, and so tomorrow evening I'll test to make sure they stuck! Then I can do the wheels (already got'em) and put on the foam. Haven't decided for sure whether or not to paint. Probably will, just haven't got around to deciding color. There were some shenanigans, including swapping out wheels (which turned into a cascade of swapping out rod, washers, and nuts), stores being out of the sizes I needed, and then accidentally grabbing 8 45-degree elbows with 2 of them being the wrong size.