Heaving to... a very useful maneuver not commonly mentioned here

Got a little time on my hands after receiving good news on the job front, so I reckon I'll bring up a topic which doesn't seem to get much "airplay" here: heaving to aboard small craft. The best example I can give regarding the usefulness of this maneuver is an incident which occurred on San Diego Bay long ago. A friend of mine had recently purchased a boat but he didn't know much about sailing, so we were on an "instructional voyage" when this incident occurred. Those of you who've sailed on San Diego Bay know that it can get quite crowded, full-on buster-@$$ marine traffic (especially on weekends & holidays), the 405 at rush hour in L.A. has NOTHIN' on it, LOL.

This wasn't a holiday, might even have been a weekday, I can't really remember, but I was trying to teach my friend to show courtesy to skippers of working craft, in this case the bay ferry operated by the Star & Crescent Line back in the day. We had just sailed past the Ferry Landing in Coronado, and we were headed toward shoal water at the foot of Orange Avenue (the main drag in that burg), so we were preparing to tack when I noticed the ferry leaving the dock on yet another voyage to the foot of Broadway in San Diego, aye? I saw the perfect opportunity to demonstrate to my friend the usefulness of heaving to in certain situations...

I told my friend to leave the jib sheet cleated on the port side (we were on the starboard tack at the time), then I gently rounded up into irons to take way off the boat... once enough boat speed was lost, I simply fell off a bit on the port tack till the jib backed, put the tiller down to leeward with my foot on it, and "VOILA!!!" We were momentarily "parked"---drifting at a snail's pace while I explained my reasons to this friend. Of course, while heaving to one is still subject to the vagaries of wind and tide, but it's a slow drift as opposed to making headway while close-hauled (or on any other point of sail). So, there we were, just momentarily parked or hovering in the sunshine as my friend grabbed a couple more beers, LOL.

Well, that ferry skipper left the dock, then looked over to see me and he backed down a bit, thinking that I was gonna come roaring back on port tack in a crossing situation... but he looked again to see me casually cracking a beer while holding the tiller down to leeward with my foot, one arm extended toward the ferry with my fingers giving the "go ahead" sign, LOL. A perfect act of nautical courtesy, and a good lesson to my friend... heaving to can be very useful, while nautical cred (and good karma) can be earned by showing courtesy to skippers of working craft who ply the same waters. Racers don't have much need for this maneuver, but it still pays for recreational sailors to know it and use it when it serves a purpose.

Now, once that ferry skipper realized that I was yielding all right of way to his craft, he laid the throttles on the dash and surged forward... he didn't really need to do this, as my friend & I were in no great hurry, but the ferry was small enough to fall into that gray area concerning right of way for commercial vessels. I can imagine that skipper, who probably dealt with countless ignorant or arrogant @$$holes (standing on their right of way), and whose job as a commercial skipper was on the line in every crossing situation, thinking to himself: "HOLY CR@P, WE GOTS NAUTICAL COURTESY!!!" BWAHAHAHAHAHAHAHAHA!!! Damn. But it was all good, he even waved his thanks as he departed, and my friend learned something.

Where else might heaving to come in handy, you ask? Well, I'll tell ya... imagine standing off a crowded fuel dock, waiting for dock space to open up, aye? You don't need fuel, you just wanna buy more beer and get the f#% on down the road, LOL. But if you sail too far away from the dock, some inconsiderate and possibly clueless wank aboard a powerboat will undoubtedly snake you and keep you waiting even longer... so whaddya do? Ya heave to in a good spot, out of the way of traffic but close to the dock, and as soon as dock space opens up, ya charge in and make your beer purchase, LOL. See how useful heaving to can be? It shortens the distance to the dock on crowded days, and lets you take your rightful place in line.

Okay, I'm done here, I just wanted to touch upon a topic which I haven't seen addressed here yet... heaving to can be very useful when ya just wanna momentarily hold your position as you wait for developments to unfold. Best use I can think of, allowing large commercial craft or warships to proceed upon their way, though there are other uses for this maneuver. With enough sea room, one can heave to for hours or days, but I always viewed it as a temporary maneuver to be used under just the right circumstances... showing courtesy and allowing those skippers to assume the right of way when they need it most. Remember, Poseidon favors those with good nautical cred & karma, BWAHAHAHAHAHAHA!!!

THUS ENDETH THE SERMON, TIME FOR ANOTHER COLD BEER & SOME ENTERTAINMENT, LOL. Y'ALL BE GOOD, I'M OUTTA HERE... "HASTA LUEGO!!!"

Okay, I'm still lurkin', so I figured I'd add a little info... one can still heave to with a boat which only carries a mainsail, but ya gotta hold the boom out to windward with one arm while pushing the tiller to leeward with the other. Leaves no free hand to grab a beer, unless you use your foot to hold the tiller down to leeward. This sort of 'heaving to' isn't quite as effective as the kind with a backed jib versus the tiller (and rudder), but it still works after a fashion, ya just gotta figure it out and go with whatever results you get, LOL.

Okay, now I'm done, I'm thinking it's time to watch another Martin Scorsese flick... watched 'THE DEPARTED' last night, might have to do another of his flicks tonight with the 4-pack video I checked out of the library, LOL. No rental fee, the DVDs are all free just like the books, which is kinda nice when ya don't wanna deal with any political ads, LOL. Seen too many of THOSE lately, if I never see another again it'll be too goddam soon, AYE??? Alright, this time I'm outta here, y'all be good, and I won't let the screen door bang my @$$ on my way out, BWAHAHAHAHAHAHA!!! Damn...

Wait, that reminds me of a classic moment in trucking, this time in Blythe (or Blight), Kalifornia... there used to be a 76 truck stop there, and as I was driving by one day some hand keyed his CB mike and asked:

"IS THE FOOD ANY GOOD IN THAT TRUCK STOP?"

Another hand who sounded like he'd been driving since dinosaurs roamed the earth, he keyed up and replied:

"DRIVER, THE FOOD IN THAT TRUCK STOP IS SO BAD THAT THE FLIES ALL PITCHED IN TO BUY A NEW SCREEN DOOR!!!"

Just another classic moment in that separate reality known as OTR truck driving, LOL... ya heard some pretty funny lines back in the day.

Thought of a few more good reasons for heaving to, starting with donning or removing a wetsuit... sure, an experienced skipper can do this while under way, but it's a heckuva lot easier if one simply heaves to for a moment. Also, aboard somewhat larger craft with bigger cockpits, heaving to can give a skipper (and crew) a good opportunity to tidy up the boat or make an adjustment.

When I was young, my friends & I were all social outcasts & skateboarders, back when skateboarding was a crime, LOL. And we were so tired of getting hassled all the time, that we often went sailing just to get away from it all... and party undisturbed on the water. Sometimes, if it was too breezy, we'd heave to momentarily to spark a bowl of weed, maybe a fatty... less wind that way with the boat simply drifting.

Of course, one could lessen the wind's effects by falling off and sailing downwind, but then a skipper lost ground, while merely heaving to and drifting for a moment didn't cause much loss of ground. Just an observation from this old Laser sailor who used to spend a lot of time aboard Lido 14s and Rebel 16s, where heaving to was an effective way to take a break for whatever reason.

Besides, sometimes it's COOL to sit and drift for a moment somewhere on the bay or ocean, and just chillax for a moment as ya take in the scenery... life could be worse, you could be looking at Compton, North Philly or the Lower Bronx, LOL. On San Diego Bay, the ever-present city skyline was best viewed from a distance, no annoying traffic & rat-race noise... offshore, views of Point Loma, the Hotel Del Coronado, and the islands off Baja were good for sailors.

So, my advice to those just learning to sail would be to practice heaving to until you can do it easily... using the wind to slow your craft before letting the jib back and putting the tiller down to leeward. Done right, you will simply round up into the eye of the wind for a moment, take almost all way off your boat, then fall off slightly on the other tack to back that jib and put your tiller down to leeward... works like a charm, and is rather neat when viewed from shore or another boat.

FOLKS THINK: "WHOA, LOOK AT THIS SKIPPER, HE (OR SHE) JUST STOPS & HOLDS POSITION AT WILL ANYWHERE ON THE WATER!!!"

On a historical note, this maneuver was commonly employed by skippers in the Age of Sail, because it worked and served a purpose. Back when England was "terrible at sea" (and by "terrible" I mean a naval force to be reckoned with, NOT incompetent, LOL), ships of the Royal Navy would routinely heave to so mail & stores could be transferred, officers & men could embark or disembark using gigs alongside, admirals could hold conferences aboard the flagship, etc., etc.

Of course, the Dutch Navy, American Navy, French Navy, etc., all used the same maneuver, since it offered safety and convenience under certain conditions. When modern small craft sailors heave to, they are simply performing a maneuver which has been used for centuries, and it has probably lasted so long because it is effective, and quite useful under the right circumstances. Okay, I'm done beating this dead horse... CHEERS!!!

P.S. Bonus shots of dawn this morning, just for being patient as I beat the dead horse, LOL... 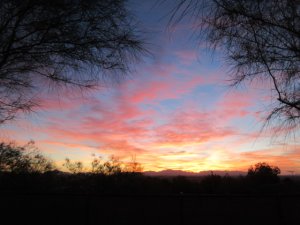 Look closely and you can see the crags, domes & spires of Cochise Stronghold (West Side)... sometimes they look much closer, some trick of the light or the atmosphere, and at other times they seem more distant. Still, I like my view, it's pretty sweet, LOL. 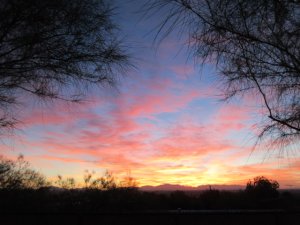