May your rudder steer on course and your sails filled with blessings and thanks.

Right back at ya... got a 16-lb. bird in the oven and my home is starting to smell REALLY good, LOL. I've been knocking out prep work and house-cleaning chores for nearly four hours, since my family is slated to visit manana or maybe Saturday... but the house looks great, I even broke out the swab (mop) and did my linoleum floors (kitchen & two bathrooms), so they're looking good, WOOHOO!!! All the bathroom rugs are washed & hanging out to dry on an impromptu laundry line, a dock line strung between ends of my hammock stand in the yard. That Arizona sunshine sure feels good too, beautiful weather here, even though the nights have dipped below freezing (ice in the birdbath again this morning).

Meh, I was just talking to a good friend about my situation, and I'm not gonna let ANY of this year's bad news bring me down on this Thanksgiving Day... I've enjoyed excellent health for most of my life, and that's reason ENOUGH to be thankful, but I'm also REALLY looking forward to this upcoming visit from family members, since I haven't seen any of 'em in four years. Again, a reason to be thankful, I just hope their trip goes smoothly on the interstate. It's only about 6 or 7 hours, depending upon traffic in Dago & Tucson... El Centro & Yuma don't have all that much traffic, and the speed limit jumps to 75 m.p.h. once a driver is past Yuma. Drops to 65 m.p.h. again through Tucson, but that's not for long, only 10 miles or whatever.

Well, I'm gonna go post some pics of the "War Room" in that other thread, then grab a shower and another beer before watching some football. Funny thing, I've been so busy, I totally forgot there's football today, and I'm thinking that Roku Streaming Stick might help me pick up some games. Haven't been watching any football this season, due to all the political bull$h!t, but if I can get some game action today, maybe I'll watch it. I've always been a lifelong fan, but I'm not into watching scumbags with political agendas kneeling during our National Anthem, 10-4??? Especially overpaid crybaby athletes, PFFFFFFFT. They need to STFU & get politics OUT of the game, and let the players just focus upon winning on the gridiron. My little rant for the day, LOL... CHEERS!!!

Y'ALL ENJOY YOUR THANKSGIVING DINNER, I KNOW I WILL, WOOHOO!!! BRING ON THE TURKEY & MASHED TATERS & STUFFING FROM THE BIRD, ALL SWIMMING IN GRAVY!!! BRING ON THE BAKED GREEN BEANS WITH 'CREAM OF MUSHROOM' SOUP!!! DON'T FORGET CRANBERRY JELLY ON THE SIDE FOR THAT TURKEY!!! LOL... DAMN, I LOVE THIS HOLIDAY, IT SHARES TOP HONORS WITH CHRISTMAS, AND NO SCHEMIN' GLOBALIST TRASH ARE GONNA RUIN MY DAY TODAY!!! HASTA LUEGO, YOUSE NAUTICAL HEE-ROES!!!

Damn, that dinner was good... I am definitely full. I couldn't even finish the XL plate I loaded up, had to put the cranberry sauce in a bowl off to one side because my plate was heaped so high it looked like K2, LOL. I was thinking earlier that I've been cooking now for 48 years... I began at age 10 in order to give me dear departed mum a break as my parents went through an ugly separation & divorce. My chosen way to reduce the stress on her, ya know? But for most of my life, I've been cooking for myself & friends & family, and I've got it down to a science. I don't mind kitchen work either, it's therapeutic for me... knowing that I'm making something good and I'm still around to do it, LOL.

Never did find any football, at least not on the free channels, so I said to hell with it, and I wound up watching two very enjoyable G-rated family movies, those goofy MVP flicks with Jack the Chimpanzee, LOL. I actually watched the sequel first, never having seen either one, I just saw skateboarding mentioned so I figured I'd give the flick a day in court... pretty good skating in there toward the end, on that ramp with Bob Burnquist, he's a helluva skater. I admire him for his contributions to the sport, plus his promotion of the 'Big Air' ramp and 'Big Air Skateboard Contest'---that's always fun to watch. Hard to believe how far skateboarding has come over the decades, it's really a mainstream sport now, extreme but just friggin' HUGE...

Anyway, I'm quite content, knowing that I'm gonna see my relatives soon, and I'm gonna eat well all weekend long, LOL. Man, that meal was DELICIOUS, I really powered down some food but the XL plate eventually had my number, LOL. I even cut up some turkey afterward and put some gravy on it for the kittehs... they ate that $h!t up pronto, I can see I'll be sharing more turkey & gravy with 'em this weekend. Meh, no worries, I made enough... now that I have a larger oven again, I can cook birds larger & heavier than the 14-lb. birds which were the max size with my last oven. Just means more leftovers, and I'm a fool for those leftovers, easy to rig the plates too, now that the cooking is all done. I have some dishes to do manana, but that's okay, they can sit & soak in the sink overnight.

ALRIGHT, I'M OFF TO SEE SOME MORE ENTERTAINMENT ON THE 65" CURVED SCREEN, GOT THE KITTEHS WITH ME ON THE RACK SO I'LL SHARE SOME QUALITY TIME WITH THE VARMINTS... CHEERS!!!

Holy Cow!!! That was one helluva weekend, but now I'm heller beat tired... I'm thinking of taking a little siesta here pronto, LOL. Had good BBQ last night, ate a primo country-style breakfast this morning, and I sent my family off with a cooler full of thick turkey sandwiches, leftover BBQ, etc., but now I'm exhausted. Time to get horizontal, I'll probably fall asleep in a minute... good weekend though, and it was nice to see my family again after so long. Wish they had stayed longer, but they're on the fly this trip... oh, well, I'll see 'em again sometime, maybe when I get out there to San Diego to go sailing, whenever that might be. I'm off to la-la land, I am really tired, LOL. Cheers!!!

Boy, I laid down for awhile but never went to sleep... which is okay, my Infantry feet were tired from doing so much stuff yesterday & today. When I went to scrounge firewood in the field yesterday, I met a really cool hand who also turned me on to some wood from his scrap pile. His home borders this large open area of brush, a wash, and whatnot... it's a huge dirt biking area a couple minutes from my house, LOL, complete with berms, jumps, the wash, and all kinds of brush, mesquite trees, etc. I've lived here since February of 2019 and I never even knew this riding area existed a few short blocks south of my home, on the other side of the hill... that's just crazy. Now I know where the local kids go riding, I see 'em on dirt bikes & quads in the 'hood.

Arizona has some heller offroading too, I mean some SE-WIOUS TRAILS & MOUNTAINS... hopefully I get back to work soon, repay my brothers for helping me out, then save up for a big ol' thumper that can handle the trails & washes. It's kinda cool, having all these different riding areas so close to my home, all these beautiful mountain ranges which surround me have fire roads and BLM roads and trails for riding, perfectly legal too... in Kalifornia, I had to drive for a while before I even hit the trailhead, dealing with Big City traffic. Ugh.... I don't miss that traffic at all, LOL. So even though there's no ocean, we have these fantastic outdoor adult playgrounds for riding, hiking, technical rock climbing, horseback riding, etc., and they're all CLOSE, like mere minutes away.

I reckon I'm thankful for this reality, and all the cool people who live here... unlike that hostile daily grind in Kalifornia, LOL. Road rage... there's something I haven't dealt with in a long time... every once in awhile I get some idiot tailgater a few inches off my rear bumper, but that's fairly rare, I figure those jackholes probably drove from Tucson or wherever. Plenty of bad drivers in Tucson, that burg only has half a million people, maybe a few more, but some of the drivers remind me of those Tijuaneros on the freeways in San Diego... downright dangerous, LOL. I'd call 'em the "blue plate specials" due to the light blue B.C. plates, for Baja California. Rolling wrecks, many of 'em, definitely NOT D.O.T.-approved, 10-4?

Meh, somebody has to drive those rigs... oh, yeah, that reminds me, I scratched the $h!t out of the paint on 'The Mighty Camry' yesterday, offroading down the wash in my search for firewood. The brush closed in here and there, and try as I would to avoid it, every so often I'd hear that lovely sound as sharp thorny branches scraped down the side of the car, LOL. One branch was loaded with dead flowers or whatever, and like a fool I still had my window open, jamming redneck tunes while tearing down this wash, right? Well, one branch was a little too close, I ducked my head toward the shotgun seat to avoid getting thrashed, but the branch dumped about 100 of those damned dried flowers INTO my car, LOL. So I have some vacuuming to do in the near future, also some paint buffing...

I don't even sweat paint damage to the Camry, the car will soon be 19 years old anyway, LOL. It does alright in the field, but it's not some lifted disco truck so I gotta watch the deeper ruts and "high center" hazards. My friend Paul (Pablo) in Coronado has a lifted disco truck, that thing can handle some serious offroading, and unlike most disco trucks, his actually sees dirt, LOL. He has the big ol' Monster Mudders too, tires with gnarly tread for the dirt, it's pretty fun to go cruising in the field with that truck. We've shared quite a few adventures over the decades, including remote camping and other cool activities. It's a party truck too, no shortage of beer & weed in that rig, LOL. I keep telling him to get out here so we can thrash around in these mountain ranges, there are primo trails here and I know he'd dig 'em.

Well, that's enough reminiscing for one day, this certainly has been a cool weekend, even though my feet are still tired, LOL. At least I have PLENTY of gourmet grinds in the fridge, no shortage of that either, and there's also plenty o' beer, including some Elysian Space Dust IPA which doesn't suck. I'm just going easy right now, having a Coors to keep things light... but that Elysian brew is in there, along with some Kilt Lifter. That Elysian outfit also brews that 'DayGlow IPA' number with the tiger on the label, and THAT is some good beer, LOL. I drank a truckload of Elysian beers while camping for six weeks in the PNW, surrounded by 300' Sitka Spruce trees and a beautiful view of Willapa Bay & the Pacific Ocean. That reminds me, I gotta call that computer guy manana and see if he has salvaged my PNW pics, those are some really cool pics of the forest & bay & ocean, LOL. Okay, time to cut on the bar light... might be a shot of rum in the offing later, maybe some rum & eggnog. Cheers!!! 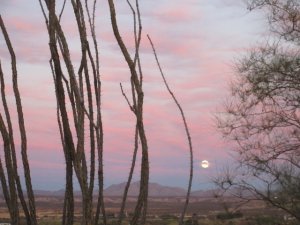 P.S. Bonus shot of moonrise this evening as seen from my front yard...