My sailing club’s Sunfish fleet has a boat that had a gudgeon that appeared to be pulling out the bottom two fasteners, and in the process tilting down the tiller. I removed the gudgeon screws (yes, screws; not the normal bolts) and found that a repair had been made years ago. The repair appears to me, to have been made by substituting the original bolts with screws and anchors. In the first two photos you can see a small part of the anchors for the top two screws. The bottom two anchors were easily pulled out when I removed the screws. The anchors are the type that are used when anchoring a screw into masonry.
The third photo shows the screws that were being used.

Also, note that the bottom section of the gudgeon, where the bottom part of the rudder-pintle slides in, was bent. 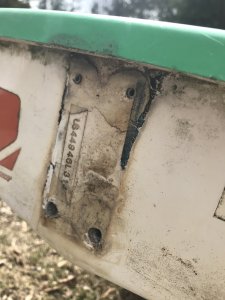 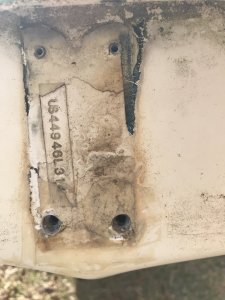 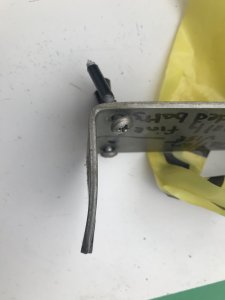 Is this boat an actual Sunfish? Usually there's an indentation in the stern that was left in the molds when they went from the old style to the new style rudders. Boats with the new style rudder usually have an aluminum backing plate and threaded machine screws so having plastic anchors doesn't make sense.

danpal:
Yes, I believe that it is a true Sunfish. I do see a LaserPerformance sticker on the stern.

Every other one of our club’s Sunfish have four phillip’s-head machine screws holding the gudgeon in place.

I suspect that this boat came from the factory with the backing plate and machine screws too. I think that it was changed years ago by a previous owner or by someone in our club.

I’m eager to hear if anyone else has seen something like this and how it was repaired.
C

That is strange place for a number.

Charles: I thought so too. I thought that it would have advantages and disadvantages to being there. This number is very easy to read. Most Sunfish serial numbers that I have seen were nearly unreadable.

Staff member
Most likely the boat was dropped on the gudgeon and that was the poor repair.
There should be an internal aluminum plate that served to anchor self tapping stainless machine screws.
The gudgeon is stout, it can be bent back into shape.
I was told that some boats had HIN numbers in a hidden place.
And the indentation for the old style rudder carriage bolt was finally taken out of the molds, I believe when they went to the rolled edge hull.
FWIW the newer boats get a generous blob of adhesive, probably 5200, under the gudgeon in addition to the screws. You could seal up the hull holes, the redrill new holes in the gudgeon for new self tapping screws. Otherwise a deck plate is in your future.

Fwiw I’m not sure it’s a Sunfish either. I don’t recall the hull being pointed beneath the gudgeon. The lip overhang over the transom also looks too small. LP has made Sunfish with white deck and a fore and aft wide green stripe, but if the whole deck is green it wasn’t LP-made.

So I had one that the 2 lower machine screws no longer engaged the aluminum plate. That is the threaded portion of the plate corroded and nothing was left for the screws to hold to.

I drilled to put in 1/4-20 (or 28 if I could get them I cant remember). I got full engagement in to the aluminum. Yes I got aluminum chips out and I was looking for them. I was able to drill the gudgeon hole larger and made sure the lockwashers were in place. So far it lasted most of last season.

One option for a repair is to make a larger aluminum plug threaded to the original screws. Then drill and tap the plate for the plug and glue it in place. I think you will want to get the best thread lock for the aluminum to aluminum part and epoxy for the glass to aluminium. The use a liberal quantity of corrosion prevention stuff on the plug.

The other option is to put a port in and do all 4 from the back with 316 stainless nylock nuts.

Plus to others that have had questions: I’ll take some photos and notes tomorrow to get some answers to your questions.

New to me is this pop-rivet, available in smaller sizes (than ¼"). 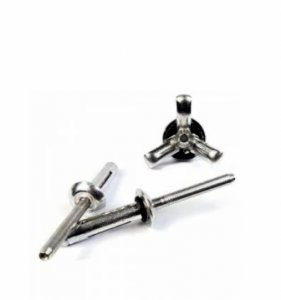 I took a good look at the boat and I can’t see any evidence that it is not a true Sunfish. There are stickers that vouch for it’s heritage and I couldn’t see any features of the boat that are atypical. The pointy part of the hull below the gudgeon looks the same as other boats.
Besides the serial number which is stamped on the hull and hidden by the gudgeon is another serial number stamped in plain sight on the starboard side of the transom. However, the stamping is almost impossible to read (as has been my experience with many other hulls.
Attached are pictures that I took this past weekend. 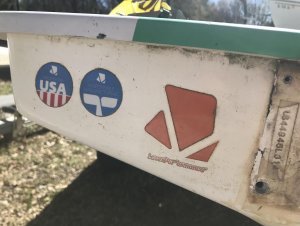 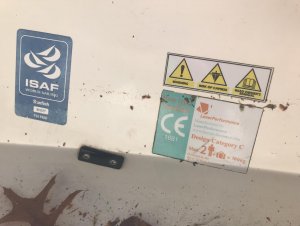 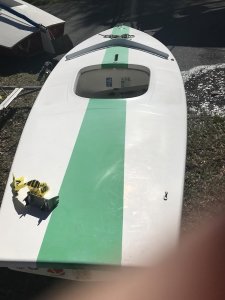 That is a Sunfish and a recent one - 2015 or so. I didn’t realize the hulls were that pointy - I’ll have to look at mine - it’s in winter hibernation off site.

Staff member
Roger, do you know Tom Payne? He has a lot of good Sunfish knowledge and metal work experience.

No, signal charlie, I don’t know him.

Staff member
He does a lot of work with the lake Norman yacht club, races Rangers, and works with the LNYC Sunfish Fleet.

Thanks signal charlie, I got a few good suggestions already. I would guess that many of our club’s members know Tom, there are lots of connections with the two clubs.

RogerMusser said:
Will the gudgeon be reliable if straightened with a vise?

Long answer: One of my Sunfish (now back up to five) has a thoroughly bent-up gudgeon; however, the rudder "clicks" right in with no friction noted.

Did you straighten the bent-up gudgeon or are you using it while bent? (A few of or gudgeons were bent a little and they worked fine, after straightening they still worked fine.)

We straightened our badly-bent gudgeon and it looks good.
The goal is to have it mount and unmount easily plus manage to stay on while sailing.
You must log in or register to reply here.
Share:
Twitter Reddit Email Link
Top