Y'all know I've been living in the boondocks for a while, so I missed this 2019 video of F50 racing craft in action... man, oh man, this modern technology has turned sailboat racing into an extreme sport, lol.

I like this video because it gives viewers a good close look at some of the newfangled technology... that breakdown of controls on the wheel itself was insightful, I never knew the skipper had that many controls right there at his fingertips. Pretty amazing stuff...

This video also does a pretty good job of explaining how other gear or components work aboard the boat, and gives a good analysis of each crew member's job on board. Very nicely done, and the action is incredible... can you imagine accelerating to 40 knots PRONTO aboard your Laser or Sunfish? Yeah, and THEN you woke up, lol...

Anyway, this F50 video is certainly worth watching, it's a slick production backed by big money but it delivers in terms of insight & performance. I thought it was kinda funny, that one gal saying she was more of a "pilot" now than a sailor... that's where modern technology has taken the sport.

In my time on this planet, I've witnessed a lot of changes & technological advances across the board, and changes in the athletes themselves: look at what vertical skateboarders are doing now compared to the '70s & '80s!!! Never in my wildest dreams could I have foreseen the changes, and sailing is no different as far as major advances go.

Look at these modern racing crews, with their helmets and what amount to fancy climbing harnesses: they look like pilots in their group photos, lol. Funny thing, I was always an early proponent of using climbing harnesses aboard boats (for maintenance purposes, mind you), rather than using clumsy bosun's chairs... the harnesses are safer, for starters.

I recall Bill Bennett [R.I.P.] commenting upon my harness one day when I brought it aboard to do some "sling work" (as I called it). He told me, "All the guys are using those now." He was referring to the bow men aboard Cup racers of that era, and his statement made perfect sense... a climbing harness is so much lighter & more efficient, ya know?

Anyway, enjoy this video, it's certainly educational... these F50s sure are wild, it's just amazing what these modern boats can do. At my age, I lean more toward SLOWING DOWN and enjoying the cruise, lol... but I can still appreciate these high-performance craft and the crews which make them get up and go. 40 knots in seconds flat, lol... damn.

Just a status update, may as well resurrect this video while I'm at it... y'all know I lost a good gubmint job last year for all the wrong reasons, thanks to the inmate who kept smoking near fuel (including a 1000-gallon gasoline tank). After asking him nicely a dozen times NOT to do this, particularly while I was standing near the tank, I finally lost my temper and hollered at the douchebag, who was clearly doing it over and over just to rile me. Anyway, it really hurt, losing that good gubmint retirement program... since then, I've tried several different jobs, but haven't found a steady job worth keeping, given the permanent injuries I've sustained over the years due to dirt biking and whatnot.

I recently tried overnight stocking on graveyard shift at WallyWorld, but that stooping, bending, and hunkering down to lift heavy cases or bags of merchandise was aggravating a lingering foot injury, and when I was supposed to be sleeping during the day, I was lying there wide awake with my foot giving me grief. So I finally said to heck with it, I had to put an end to the cycle, but at least I made a quick grand to pay bills... my cost of living isn't that high here in the desert, since I own my home free & clear (and Thank God for that, lol). Anyway, I earned a little breathing space, and I think I'm about to be hired to work as a cook in a nearby nursing facility, which suits me fine, as I've always been good in the kitchen (and with the BBQ grill, lol).

Meh, it's honest work, and the facility is literally like a minute from my home... I abhor commuting, since it cuts into your paycheck right off the bat. Probably a holdover from commuting in San Diego, which can be a REAL HASSLE, but it still bugs me, ya know? I could've taken a job over in Tucson months ago, driving a big ol' end dump, but I did the math and it turned out to be 2000 unpaid commuter miles per month... that all adds up in fuel costs and wear & tear on this older Camry of mine, not to mention at least 1-1/2 hours of each workday wasted on the commute, IF traffic is flowing smoothly. No thanks, I had to pass on that job, they only wanted to pay $16 an hour to start, so I said, "No dice." If I'm gonna drive a big truck, I need to make $20 per hour, rock bottom.

Anyway, we'll see what happens, this nursing facility looks like a decent place to work, and I'd stay busy in the kitchen so the time would go by quickly. I don't mind prepping and cooking food, SOMEBODY needs to do it for these elderly and disabled folks, and I'd rather do something worthwhile instead of slaving away for some wank driven by profit and greed, lol. Just my $.02, I'll jump at the opportunity if the staff call me, and they already know I can pass any drug screen. The proximity of my home may also be a factor in the hiring decision, they know I'm close, lol. I could actually walk to work if I'm hired, though I'll probably drive during the heat of summer. At least I won't be putting the Camry through the commuter torture test... ugh.

Well, I'm off to get cleaned up and go pay some bills, I just paid my auto insurance through October, since I have the money in my USAA account. It's only $40 per month, but that'll keep me from having to deal with it over the summer and into fall. Gotta pay my city utility bill today as well, and stock up on some stuff at Safeway & WallyWorld. Probably better grab a phone card while I'm at it, gotta have my prehistoric flip-phone operational, lol. I call it my 'Star Trek Communicator' because I hafta flip it like one of those "Kirk to Scotty" numbers, aye? I like the old Star Trek programs, most modern TV programming is no good, too political. That's why I watch old Westerns & action flicks, they were made for entertainment and not political propaganda purposes, lol. Meh, I'm off, y'all be good... Cheers!!!

Whoowhee!!! That was one heck of an errand run, and it's starting to get hot out there, but I paid some bills and picked up a bunch of stuff from three different stores, lol. Last stop was Safeway, where I wanted to pick up some fresh berries for my cereal, and their produce aisle also had some fresh salsa and whatnot. I already have salsa, so I bought a tub of fresh layered bean dip which is downright delicious on Tostitos Scoops... I also picked up a tub of 'Spicy Guacamole', and man, oh man, that stuff was ON FIRE, lol. Dunno if I inhaled some when I took my first bite, but next thing ya know, I was hackin' & splutterin' like a Ford V-8 firing on half its cylinders, lol. Cleared my pipes, that's for sure... I'm thinking they used habaneros for the 'Spicy' part.

Anyway, I'm taking a break, I picked up a few Westerns from our local library, so I'll probably read a book this afternoon. Our library has a GREAT selection of Westerns, lol... this is Arizona, where folks are LIVING the Old West dream, 10-4? Sometimes when I go out to the Stronghold, I'll see classic files of horseback riders just winding their way along some primo trail... they look like they're straight out of an old Western, lol. Some of those guides must do pretty well too, considering the number of riders in some parties... eight or ten strung out in a file in the brush. Does my heart good to see 'em, even though I'm the kinda guy who gets his horsepower by twisting a throttle, lol. Meh, just folks having fun in the outdoors, can't fault 'em there...

Boy, this A/C feels good... it's not really THAT hot yet, next month will be warmer, but when you're tramping across asphalt parking lots, ya still feel the heat. I remember walking across a truck stop parking lot in Quartzsite one day, and the lot had a giant thermometer towering above it. I exited the building and looked up to see a reading of 121 degrees, lol... and I think the thermometer was high enough to NOT be affected by the asphalt, but who knows? It gets hot in Quartzsite, that's for sure, it's much lower in elevation than where I live. Closer to the Colorado River, but that doesn't really lessen the heat, unless you're boating or swimming in the river itself. I imagine there are quite a few folks enjoying the river right now, lol.

Which reminds me, I saw this small caravan as I turned into the WallyWorld parking lot... just some folks going on a camping trip somewhere. This is a good time of year to head for the hills... get up on those "sky islands" where it's 20 degrees cooler, lol. That's no lie, the difference can be amazing, and of course that fresh mountain air is sweet too, though we have plenty of fresh clean air right here in the high desert. We're not close enough to any big cities to have the smog problems... Tombstone isn't large enough to have traffic jams, lol. Maybe with those stagecoaches on historic Allen Street... that'd be about it. And Benson where I live is just a small town, I think the atlas lists the population as between 4K and 5K, not enough for a traffic jam unless everybody hits the road at once. 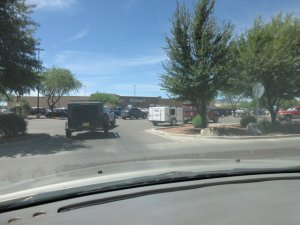 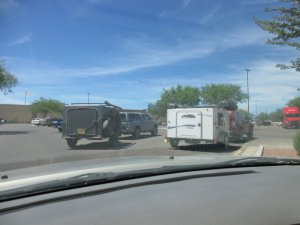 Those look something like a cross between pop-ups and teardrop trailers... nothing fancy, I've seen better ones here, but hey, at least those folks have the right idea, lol. Moi, I'm still tent camping, 10-4? Before I sign off, here are some shots of the kittehs hanging out: 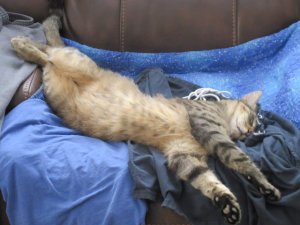 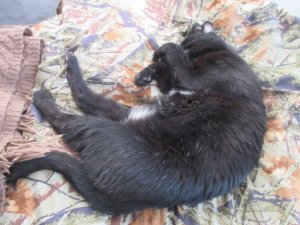 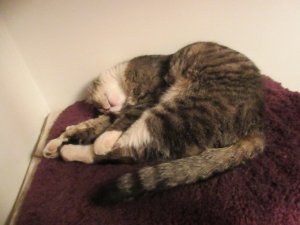 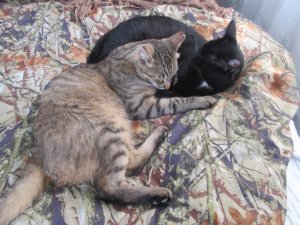 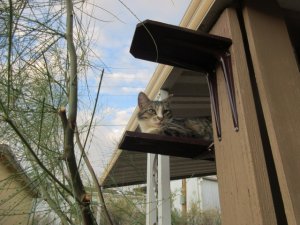 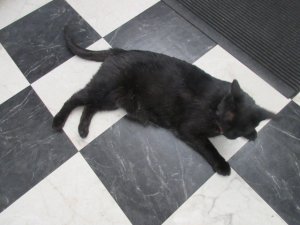 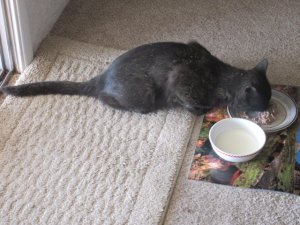 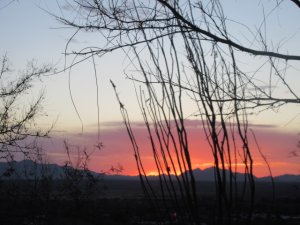 Little Phoenix likes that ledge or aerial walkway outside, that's her 'cat ladder' to the roof... all the cats use it, they can exit my bedroom window and make their way to the roof without ever touching the ground. That's Bear with the place mat, he's one of the cats who 'adopted' us after some putz abandoned him, pffffft. Looks a bit like Crackhead, but he's bulkier, hence the moniker. He's a bit of a slob too, which is why I'm throwing down the place mat every time I feed him. I coaxed him up on the table last time, that's where I want him to eat during bug season. Last shot shows the Dragoons at dawn, nothing spectacular, just another dawn shot as seen through the mesquite, ocotillo & palo verde in my front yard, lol. Cheers!!!
Last edited: Wednesday at 5:03 PM
You must log in or register to reply here.
Share:
Email Link
Top