Hello, my first post on this website! My family recently bought a cabin in northern Michigan. And there was a Coca Cola super snark 11ft sail boat in the garage. We are wondering if this thing is worth any money. And if anyone had some history on it! Thanks!

Someone is trying to sell one for $500 on LetGo... whether the seller will get $500, that remains to be seen. Those little plastic boats were marketed through Sears & Montgomery Ward back in the day, and the manufacturers claim that something like half a million have been made since 1958, including variations of the Sea Snark, Super Snark, and Super Sea Snark. Early versions were "unclad"---no polystyrene wrapper for the foam, I guess. In the '60s and early '70s, one could buy a Snark for under $100... co-branding/marketing campaigns included ties to Budweiser, Coca-Cola, Kool Cigarettes, etc. During the Kool marketing campaign, one could buy a Snark by sending $88 and the end flap from a carton of Kools, LOL.

Do you have any kids who want to learn how to sail? If so, you're probably better off letting 'em use the boat, pending a thorough inspection, of course. The Coca-Cola sail would be heller retro cool, and better for the kids than those nasty ol' Kool Cigarettes, LOL. I wouldn't send the kids into a gale with this craft, just send 'em out in moderate breezes so they can have some fun. Snarks were mass-marketed for decades and their quality standards weren't quite as strict as with other boat manufacturers. Having said that, if I found one here on my property, I'd certainly cartop it to some of these Arizona lakes just as a way to cool off... light as those hulls are, they're easily cartopped, that was always their big advantage in the marketing campaigns.

Edit: I dug up an old M5 video for clarification & comparison purposes, LOL.

It really depends on the condition of the boat. Those boats have a surprising following and if the sail is in good condition, I would bet that someone would be very happy to have it.
Cactus is right, they make great boats to learn on, as well as great boats to chill out on!
The amazing thing is that as old as the design is, they are still available today and all the parts for them as well. Good website for Snarks here: 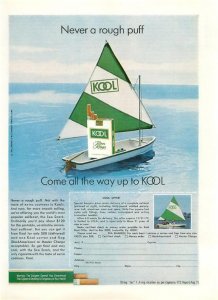 Haha, Tag, I bet that ad would go over well in an emphysema ward, LOL...

Somehow this reminds me of a billboard I once saw in my 'trucking daze'---it was up in Bend, Oregon, if I remember correctly, and the billboard showed several heinous shots of diseased black lungs, I'm talkin' the ugliest photos you've ever seen, AYE? Underneath those pics was the classic caption:

BWAHAHAHAHAHAHA!!! Damn, that billboard was HILARIOUS, I would've stopped to take a photo, even if that meant walking back a block or two, but there was no parking or even a center turn lane in that burg where I could briefly leave the idling truck (flashers on), so I had to let the opportunity go.

When I was young and didn't know any better, I'd smoke a few Marlboro Reds while getting hammered with friends, but I never really picked up the habit, and I eventually drop-kicked the nasty cancer sticks for good, although I still get hammered, LOL. I don't miss the stanky clothes either, 10-4?

Meh, as adults we all make choices... if someone else wants to wreck his or her health, let 'em rip, as long as they don't do it upwind of me. Most folks I know don't bother with tobacco, it's a filthy habit and it kills ya, LOL. Expensive too, I recently saw cartons going for $80-$100 or whatever... I can remember when they only cost $5 at a store where I worked in the '70s. Nowadays, ya might as well smoke dope instead, at least it'll calm ya down, LOL.

This video is probably the coolest Snark video out there. A flock of Sunflowers out for a good time in Europe.

That's what it's all about right there... kids having a good time aboard those little boats.