Can’t say No to Free!

An hour after selling my latest Sunfish I saw an ad for a FREE one, complete, just 30 minutes from home. I grabbed my pickin’ trailer (had to move the Minifish off) and was the first to respond.
Well, it’s a project. There’s a 3” hole punched through the deck, a cracked cockpit and a keel that’s totally buried in fiberglass slop. I’m psyched! It’s a 1967- tag still on the deck-and they were built tough- I haven’t found a single spider crack on the deck or hull. It should polish up nicely.
It had been stored indoors, fortunately, so not waterlogged. The sail is shot, the rudder and daggerboard are in rough shape but restorable (might upgrade rudder since I have an extra ‘new style’) The mast and spars are perfect. And the De Persia bailer works!
This weekend I’ll grind down the mess on the keel and may have to Shoreline it, we’ll see.
Some might say she’s too far gone, but there’s something very satisfying about restoring a boat and putting it back where it belongs. Here are a few ‘Before’ pics.

I’d Rather Be Sailing My Tornado

Entertainment for days to come. It won’t be free anymore.

you must pay to play

Good luck mate. Seems like a fun project to do.

Staff member
"Free" like a kitten. Enjoy the keel rehab...with a mask. Shop vac attached to the dust port on the sander helps also, do you have a vac? We added a Dust Deputy cyclonic separator to ours and that cut down on our vac HEPA filter replacement costs. AKA Poor Man's Festool. 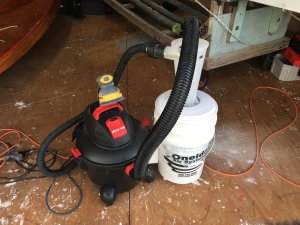 Staff member
OBTW I think you win the "Longest Band Aid Keel Patch" Award...Yes, I'm sure you do. We've sanded those, going through a lot of sander pads and also used heat gun with scraper approach. Keep water and a wet rag handy if you use a heat gun, ask us why

...okay I'll tell you... The original fiberglass did okay with low heat but the patch fiberglass cloth may smolder, or the expanding foam, or any repair materials hidden underneath, like wood we found in one boat. Stand upwind and wear a protective mask, whether sanding or scraping that polyester resin is not friendly. 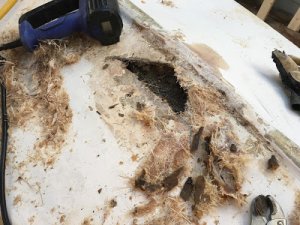 WOW, longest band-aid! I guess I’ll take it! I’m a bit intimidated by this one, I’ll admit, but I will def wear protective gear when I go at those ugly patches. The hole punched in the deck will get a blind patch, for now it is taped over.
I have an old fiberglass Sailfish hull out back. I know the keel curve would be different but I might be able to cut and paste something
This Sunfish is a ‘67. It was previously owned by a Boy Scout camp. Maybe the history of the boat called to me, maybe my own fond memories of aquatic camp won out, but I think it’s worthy of saving.
As far as expense, it will only be my time invested. I’ve already replaced the sail with a nice used one I had, I have fiberglass, resin, epoxy, etc, as I’ve done repairs, including Shoreline, before. I even have a new style rudder, ports, hardware- though I’m not sure if I’ll upgrade it (probably should) or use the original rudder. It’s a beach banger, (*AG) for sure!

Staff member
I like how you gave appropriate citation of Beach Banger to Alan.

...but I think the prizes were disposed of when we moved. So if you have a Crusty Bow Handle handy, please accept it as a memento. They look great when mounted on a rotten backer block.

First Prize! Wow, I never win anything!
As it happens, I’ve got a few crusty bow handles! If I dig around a bit I’m sure I’ve got a rotten backer somewhere…

Staff member
The one on the left with the paint looks very suitable. Congratulations to yourself!

Wow...just like.my.prized 69 "Buster Boat". I miss the storage cuddy, but this.is my #1. Totally at the top of its game with new glass daggerboard, updated wishbone tiller and extemsion and rudder system, sail, aluminum backing plates, ratchet (kept the hook for those white caps) and NO inspection ports....all access gained from going thru the bottom. Sails like a banshee.

Nice boat dog! Excellent work on the resto, we like how you cut a repair access and then replace the cutout bit.

Did you make the boat cover?

Update on my Free ‘67 (*Longest Band-Aid Award Winner)
I removed the old rudder hardware and cut a 4.5” port in the stern. I took the good advice of Alan G and signal charlie and cut down the gudgeon backer plate for the ‘new style’ rudder. I need a new jigsaw, and should invest in a decent one. The Harbor Freight has worn itself out and it might have been faster to cut it by hand, but it’s done.
That fiberglass strap inside the hull had to be chipped away at, then filed down. The backer then fit in nicely. I did a ‘dry test’ then slathered JB Weld 2-part epoxy on back of gudgeon and backer plate and silicone on the screws and nylocks.
Then finished the deck port. I could have used the JB Weld here to seal the ring but chose butyl tape. I like it! So user friendly.
Knowing the bottom of the boat was a nightmare I finally got it off the dolly and upside down on sawhorses. You might recall, this Free Sunfish is the First Place Winner in the Longest Band-Aid
Competition! I wore an N-95 and used one of my favorite tools, the DeWalt orbital sander (plus very much hand sanding) to remove the ugly patch. Most of the keel is sound, but one obvious section is not- the damage is through to and almost the length of the cockpit. Hoping to have time to get this patched up before it gets too cold, otherwise I’ll have to squeeze it into the garage with the others so it stays dry. Here are a few pics:

Staff member
Thanks for sharing the photos. Great looking rudder conversion. JBWeld is a good choice, several varieties of adhesives and sealants and available in a lot of places.

Picked a name yet? With her scouting background and scout logo fleur de lis, how about Lily?

Jigsaw...do you have a growing pile of cordless tools? We've gone the DeWALT route because that is what the pros who built our covered porch in Texas used, and in our estimation the jigsaw is one of the best cordless tools to have. There is no cord to drag around behind the tool when doing fine cutting and following pattern lines. When making long cuts in plywood the cord always seemed to wedge in the cut line. In close second is the 6 1/2 inch circular saw for the same reason.