News: By The Lee with Skipper Brendan Lee is 2019 Australian J/24 Champion 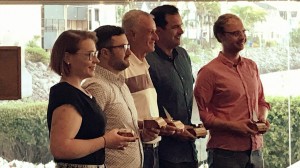 Thanks to Brendan Lee for his story: After some confusion as to whether the 2019 J/24 National Championship would be held in Adelaide or not, the Cruising Yacht Club of South Australia got behind the J/24 Class and hosted the championship from the 3rd to the 6th of January 2019. Whilst down on entrants from previous years, the competition was just as fierce. A special thank you to the 10 crews who travelled from NSW and Victoria. Twelve races were scheduled over four days of racing with the first discard coming in after race 8 and the second after race 10.