I am a complete newby and looking at a used Laser at my local yacht club. The hull seems very sound and no soft deck at all. I rigged it with a local yachting guy and the only thing that caught our attention was the free play between the mast and the tube it slips into. there was approximately 18mm of free play backwards and forwards and about half that from side to side.

The foot of the mast has a rubber? cup maybe 20mm in height making it effectively wider at that point.

There is evidence of repair work around the top of the tube with some sanding off shown. Also a few "gloops" of hardened resin on the inner sides of the tube. The lower section of the mast is marked "Radial". There is only one (radial) sail.

Is what I have described normal or will this need work?

My thanks in advance

It sounds like it's been worked on -- pictures would help a whole lot in offering a view, if you can get them posted / attached.
Also - look at other Lasers. Hopefully there's at least one more at the yacht club. Or look around on this forum for pictures, or google for pic's of a Laser mast + mast hole.

When you say "18mm of free play" - can you describe or draw or take a picture of what you mean? If that free play is at the top of the mast, that doesn't sound excessive.

There's a thread on here about buying a used Laser that I highly recommend you read too.

And it's good to be aware that many older boats have had the mast tube fail. The tube usually comes disconnected from the bottom of the hull (inside the hull), and the mast tips over, tearing up the deck around the hole where the mast goes thru the deck. That joint wasn't all that strong in the older boats when they were built, and is often compromised (cracked, broken, etc) by water/ice in the mast hole, freezing+thawing. One simple + important thing to do, is pour water into the mast hole. If it leaks down, that's a very strong indicator of a problem with that joint. The good news is that you can reinforce a weak joint relatively easily (cut a hole, lay in fiberglass, install inspection port to seal the hole). If the joint failed + the mast fell over + the boat's been repaired, the repair work is usually very obvious. This may be what you're looking at. The repair is a much bigger job than the preventative reinforcement - fixing the torn up deck + tube takes time + materials.

Hope this helps ... pictures would be great if you can post some.
L

18 mm of play at deck level is completely normal, that's the way it is on all Lasers, and you shouldn't do anything to it beyond what is allowed in the class rules: 19. Mast | www.laserinternational.org
The "rubber cup" on the mast foot may or may not be legal (shouldn't be more than 1 mm thick and not add to the length of the mast); the "gloops" in the mast step sound like something you should get rid of in any case.
As usual, pictures would help considerably!
E

Thanks Lali and CSK. Yes the play is at deck level.
I will get back down there and get some pics. I will also do the water test.
I am not overly concerned about the legality of the boat as I have no ambitions to race. This is the only Laser 1 at the club. There is a Laser 2 and a few Finns but not much dinghy action generally.
E

Some pics of said Lazer. I filled the mast step with water and left it for half an hour with no drop in level. There was a little water in the hull, ma 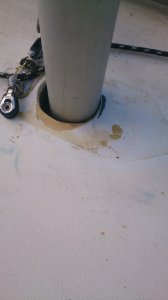 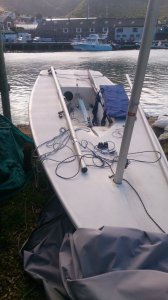 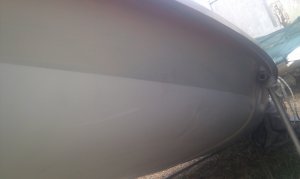 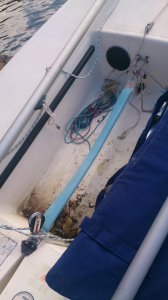 Staff member
Open the port and tell us what you see. Or better, take a picture.
Other than that, I just see a dirty, well used, Laser, missing the bailer.

PS: You need to find out where the water in the hull is coming from. Can you put the boat in the water to see if this issue gets worse?
Last edited: Dec 12, 2015
E

What to look for inside that inspection hole- look for anything that looks like it wasn't original construction= attempts at repair. I've never seen an inspection port in that location so it makes me wonder. The things nearby that I'd definitely look at are the rudder gudgeons (= the fittings on the transom/back of the boat, which hold the rudder on), that drain hole in the back+bottom of the cockpit, and the one on the transom. Those cockpit self-bailer drainholes sometimes leak water into the inside of the hull (not into the cockpit- into the inside of the hull.) It's fixable, but takes a little bit of time+work.

Overall comment- at $500, I would not think there's very much downside, especially for a non-racing boat. Probably the one thing I'd put a little more time into, is trying to understand what went wrong with the mast tube- that is, what the repair there was. That is one of the most highly stressed/loaded points in the boat (that and the daggerboard trunk/slot), + it has a history of failure in older boats. But it does NOT appear like it completely failed+ the mast tipped over--- that usually results in a lot more repair work than what it looks like in your photo.

You might end up putting some time into it, but at $500 you're reasonably likely to get a lot of fun for very little money -- old Lasers are usually VERY good at exactly that! There's nothing here that would just put me off. If it were me + I decided to buy it, I'd probably open up an inspection port in the deck near the mast to look at that critical joint in there at the bottom of the mast tube. You might learn more about that old repair too. And having it open, I'd probably lay in some reinforcing fiberglass just as a preventative measure, just cuz it is SO easy, and prevents such a difficult repair. But I'm one whose old boat failed and I did that hard repair + we're all products of our history. (The inspection hole often goes 45* beside+behind the mast hole.)

At some point you'll get to where you're either inclined to do it or not. It's usually just not possible to answer all the questions that you might reasonably think of in regard to old boats, but in the end there's just not that much to them, not that much that can go wrong with them. You pay your (small amount of) money, take a modest chance, probably have a ton of fun, maybe end up having to do some work on it, not very likely have to put much money into it. Hope this all helps.
Last edited: Dec 12, 2015

Staff member
I agree that $500 is VERY reasonable. The parts alone are worth at least that much.

In addition to what cskudder wrote, I would also check how wet the inside of the hull is. I would also look for the flotation bags (they could be anywhere in the hull; most likely in front of the cubby). With some agility you should be able to take pictures looking forward and looking backwards for further inspection.
As cskudder already pointed out, the location of the port suggests that some work was done on the stern from the inside.
E

Many thanks for all the good solid advice. Like you say not much money to get onto the water and have some fun. It's actually going to cost me around $1500 when I factor in club entry fee and annual subs. Unfortunately the only slip around here is at the club where the Laser is sitting at the moment.

Just FWIW as a different approach- I keep my boat on a trailer in my garage + I launch at a ramp. I've no idea if there's a ramp, beach or other water access; or if you'd have the ability to store it somewhere, or whatever but just thought I'd mention it in case.


EDWARD BYRNE said:
how to sell this idea to my wife

Another FWIW ... I too got back into sailing a couple years ago after a long time out. We ended up getting a kayak for my wife = her way of getting on the water. Or maybe if you've gotta pay the club, there's some way for her to have fun too, whether it's kayak, social, sailing lessons, etc etc. But YMMV, or perhaps more to the point YW(wife)MV.

Anyway hope something works out - have fun.

PS- if those floation bags are missing/damaged, 2-liter milk or soda bottles are a pretty good + cheap substitute. Tie them together if you want.
E

There is a beach option but then it becomes a 2 man operation if the laser is on the roof of the car...
Bottles a good idea! - thanks for the input.

If it's an option, I'd very much recommend a trailer. It goes on+off easily. Hopefully the beach isn't too steep or soft to pull it back up (down is rarely a problem ...) Maybe pull it by hand, and put bigger - wider - softer tires on the trailer, if the beach is soft material. Hard to know if any of that's an option where you are.

Roof-topping a Laser seems like just a non-starter to me, for regular launching+sailing.

With all that said, good luck with it. If you end up getting out on it, send a pic if you're inclined.
E

The beach has super fine soft sand and is pretty wide. The Hobie boys don't even use it.
I will send pics if it comes together.... Thanks again

I would not pay to keep it in a slip. Rigging some it is in the water is miserable. Assuming that is what you mean by paying for a slip. But a dolly and save money and headaches. I think that is a good deal. Flip it over and look at the dagger board too hull joint. I would put a port in the deck to access/inspect the tube from the inside.
S