An unusual wooden Sunfish - thoughts on it?

Hi, I belong to Brant Beach YC in New Jersey, and the club just was gifted a wooden Sunfish that was no longer wanted by its owner. It sounds like it may not have been in the water since the '60s. Anyway, it has two unusual features for a Sunfish - First, it has a centerboard instead of a daggerboard. Looking at the picture you can see that the board pivots down into position, and the trunk comes into the cockpit. Secondly, the wrap around splashrail was on early Sunfish, but it was vertical on pics of the other early wood boats I have seen, but this one is angled out.

Has anyone seen something like this before? It seems too early-on (the boat is said to have been built in the '50s)for this to be a clone. The original builder is apparently still on Long Beach Island, so we may be able to find out more. The sail would also probably tell a lot, but I don't know if the sail is around or not. The club will take delivery of the boat in the next few weeks. Thoughts? Chris 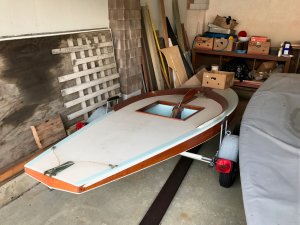