nice photos! seeing that pontoon out of the water is pretty sweet - was it a pretty big rush of adrenaline flying a hull like that?

The only other cat type boat I've sailed is a Hobie 16, and the Hilu is much, much easier to sail "on the edge" - flying a hull. The Hilu is very resposive to crew position for making corrections to heel angle. So, probably a bit less adrenaline compared to a Hobie.

The only "UH OH" moment I've had so on the Hilu far was letting the outrigger come up so high that the aft tip of the boom started skimming the water on the leeward side.

One more pic... kind of grainy (only a 2 megapixel camera).

I ran into a fellow boater at the store tonight who said... "Hey, I saw someone out sailing something that looked like a kayak with an outrigger on it..."

Hello,
I may be interested in your Hilu if you would like to sell it. What part of the Country are you in?
Jim
(Powell, Ohio or Northern Michigan)
614-554-4334
H

I'm planning to hold on to mine.

But if you contact Ralph through the following link, he may send out a message to the 8 or 9 Hilu owners he knows of to see if any are up for sale: http://www.rvharvey.com/hilu.htm

I'm planning to hold on to mine.

But if you contact Ralph through the following link, he may send out a message to the 8 or 9 Hilu owners he knows of to see if any are up for sale: http://www.rvharvey.com/hilu.htm

Hi every body I'm glad to find this forum . I had a Hilu back in the '70s and really used it in heavy weather (the only way to get enough power was 20 to 30 mph wind)I live on the beach just inside Cape Henry, ie, Mouth of Chesapeake bay, where a good northeast produces nice seas for jumping. but still always wanted more sail now I'm Jonesing for another lHilu to step my Laser sail plan onto and to make whet my renewed appetite someone down the beach has a Hilu t, though i've yet to see them sailing it ,Snap

What's a fair price these days for a Hilu ?
H

Likely hard to say, since they aren't too common.

I used mine again this fall - it's a fun little boat. 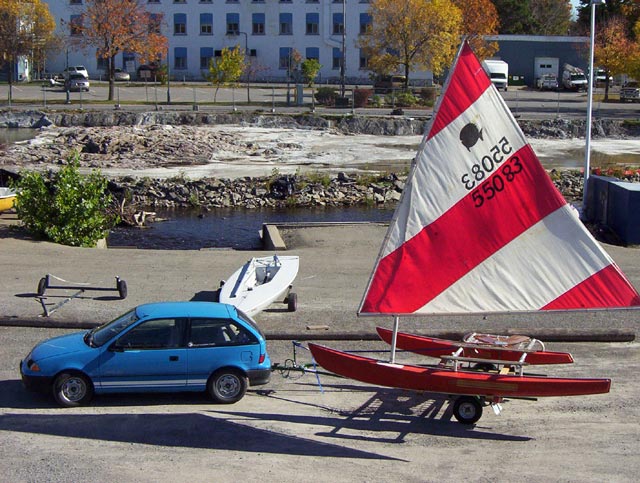 Since I sold my Hilu, I haven't been following the subject on forums, but still get occasional emails from owners who find my website. I just stumbled on this thread and added Jake's name. Now there are 13 on my list. If anyone wants the list I can email it, but would rather not post the information for spammers. From what I have been able to dig up, the Hilu was just another brainstorm experiment like the original Sailfish, but LIFE Magazine neglected to eulogize the Hilu, so didn't sell.By the way, I am one of those who flagged the misleading information on Wikipedia. If the person who paid $20k for a Hilu 'fesses up, I will gladly add him to the list of owners.
Ralph Harvey, www.rvharvey.com
A

I am looking to buy a Hilu. I had one in the 70's and it burned in a fire. I would love to have one again as I really enjoyed sailing with it. Location is not a problem. Please contact me at ann.hamel@gmail.com. Thanks!
C

Hi everyone, new to this site. Recently found out I have an Hilo at my house down in the baja. Trying to get it all back together. Looks pretty good , except for the tramp. Anyone have any pics, ideas on how to put a new one together? Really looking forward to getting this on the water. Bought a new sunfish sail and may need to redo the rudder /tiller.
P

Resurrecting this thread once more.
Managed to pick-up a free Hilu this afternoon. The next hours spent on it will determine her fate.

All wood is rotten, all aluminum parts are present & fine, sail looks ok-ish but rips like a 20yr old towel.
The hulls are in need of attention in some areas. Biggest issue is the waterlogged foam in the bigger hull. I'm sure its ~150lbs right now - after draining.
Moving the hull, you can hear it rumble. It sounds like one huge foam-piece is in there.

Other options could include finishing the smaller hull and turning it into an outrigger for my 3-person sailing kayak. (This does not necessarily mean destroying the boat but extending the purpose.)
For now you can add one to the count of known examples. 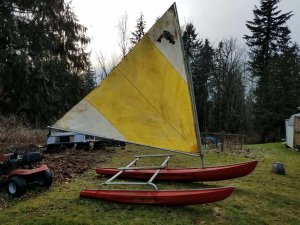 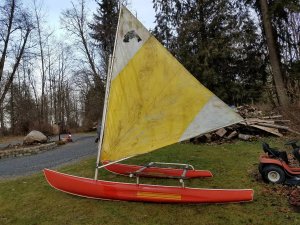 If my replies here reach someone with a Hilu, my daggerboard is missing. Measurements of an original one would be a huge help, shopping for one, or creating one.

Any tips and pictures from prev. restorations and repairs would also be very welcome.
There is very little Hilu content out there.

I assume you've found this site? AMF Hilu
There is a link there to a Hilu manual as well.

As far as the daggerboard is concerned, I think you can just use a Sunfish daggerboard... maybe others can chime in and confirm that.
C

Hi, anybody know how to repair the aluminum bars that hold the smaller hull. Mine are loose and it rotates in. Thanks. I made new rudder and daggerboard myself from old hardwood. Pretty easy and cheaper than a new sunfish part.
I

I recently came into ownership of a Hilu over the past weekend. Seems like I'm asking myself all the questions most have already posted...Overall everything regarding the boat is in good shape, I'm refinishing the wood pieces which have minor damage. The 2 hulls look to be in nice condition too.
Sail is original, needs a few patches but looks workable, or I guess well find out. This is a fun summer project.