Staff member
Howdy
Does anyone know why we switched from the 3 loop bridle to the 2 loop bridle? 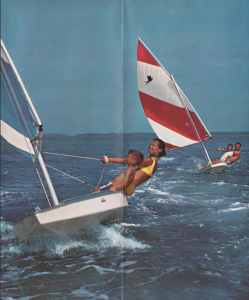 My guess as to why Sunfish started with a the three-loop?

To help keep the clew out of the water—which, if you're improperly rigged/hiked—can lead to a capsize. (The skipper is unable to effectively release his mainsheet in a blow).

It may have been racer-driven. The sail can be depowered much more effectively with the two loop. You can sheet really hard without bringing the sail in towards the centerline, which stalls the sail.

Back in the three loop days, racers would fasten the sheet to the cable between the port eye and the center loop. That way on starboard the bridle worked like a two loop to better depower on starboard when the sail is fuller. The two loop lets you do that on either tack. All of our sails, racing and recreational, are much fuller than the flat sails the boat was designed with, making the two loop more desirable.

Staff member
Yes, that’s how I remember it
K

I'm only one year into the class, but my understanding is that both bridles - the two-loop and the three-loop - are both still legal and being used. No?

Yes that is correct.
S

The other advantage of a two loop is that the mainsheet load gets spread between both eye straps. The three loop would place the load on one eye strap each tack.

I have a 1985 Sunfish "beach banger" (that I don't race) and it has the three loop bridle, and I will probably replace with a two loop bridle this spring (if we ever get spring here in Almost-Alaska-Upstate-NY.) My take is that the two loop rig is superior in almost all wind strengths, but especially in heavy air for all the reasons noted in this string. I had not thought about sailcraftri's point but he is right - with the load going to the center loop, all the load goes to one of the deck eyes, and most the the Sunfish that has the three loop bridle also have wood back-up plates under the deck eyes, and when they pull out, the repair is rather extensive. The newer boats that have a metal, threaded back-up plate under the deck eyes are a huge improvement and almost never fail. On my Sunfish project boats I almost always replace the three loop bridles with the two loop bridle.

I'm not following the 3 loop setup. Are you guys saying you now rig with a traveler block like a Laser?

You can use a block, but a bowline works fine. And the bridle can’t be adjusted. They are wire and all come at the same length.

Staff member
I thought only the two loop bridle was Class legal?

Staff member
About that bridle:

The rope bridle is illegal as people either couldn’t properly measure or intentionally used bridles that were too short (windy conditions) or too long (light air) - so they were illegalized.

Staff member
Thanks for the reference!
D