My college son came home last year about this time and suggested we go sailing. The water was cold and it was windy, but we stayed upright and just had a blast on the sunfish for a couple hours. That's the only sailing he did last summer; you know, schedules and priorities of college kids. Well, this week he suggested the same thing for this Saturday. I've got to dig the fish out of the garage but I've gotta take him up on it while I can. Can't wait. Here's my question. Last year we 2-manned the outing with both setting on the same side, facing the sail. He handled the sail and I drove. How do others like to 2-man (person) it? I sailed with my wife last summer with setting across from each other. It was definitely more comfortable not having to maneuver the tack, but probably less effecient sailing. I have also sailed with one in the cockpit and the other up on the deck. I hate to try something new this weekend but on the other hand, maybe there's a better way to sail two. I have a feeling this will be my son's only outing on the fish this year so I gotta get it right.
S

Sitting same side or opposite sides will depend on wind conditions.

My husband and I are small, but when we sail together, the person manning the sheet sits on the cockpit side, and the tiller person sits on the back of the cockpit, hands behind their back to maneuver. It seems to work. The tillerman just ducks under the boom when it comes across, so really you only have one person swapping sides.

I mainly use the same method emilikins mentioned - I sit at the back of the cockpit, and handle the tiller (the tiller extension is mostly useless since I end up so close to it). I also handle the mainsheet if its one of my younger boys, but often have an adult handle the mainsheet if they are riding along and interested. I usually try to position the passenger towards the forward corner of the cockpit, and they do most of the moving from side to side when we tack.

This is my brother-in-law and I sailing out on Lake Michigan. 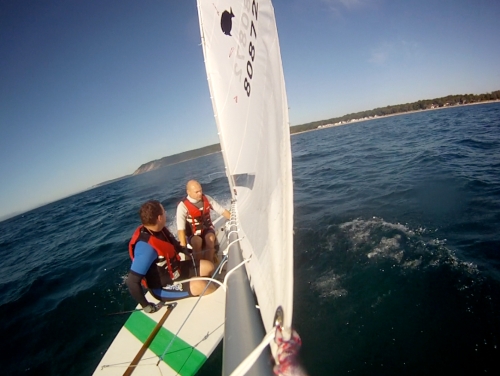 My other comment - I usually have my sail rigged quite low. If you do the same, it usually helps to adjust your halyard position on the upper boom to give you and your passenger a bit more room to duck under the boom.

Well, there's two votes for front and back. Sounds like a plan. I just gotta keep from jabbing my back with the tiller. 16 mph wind forecast so I will probably be all over the cockpit just trying to survive.